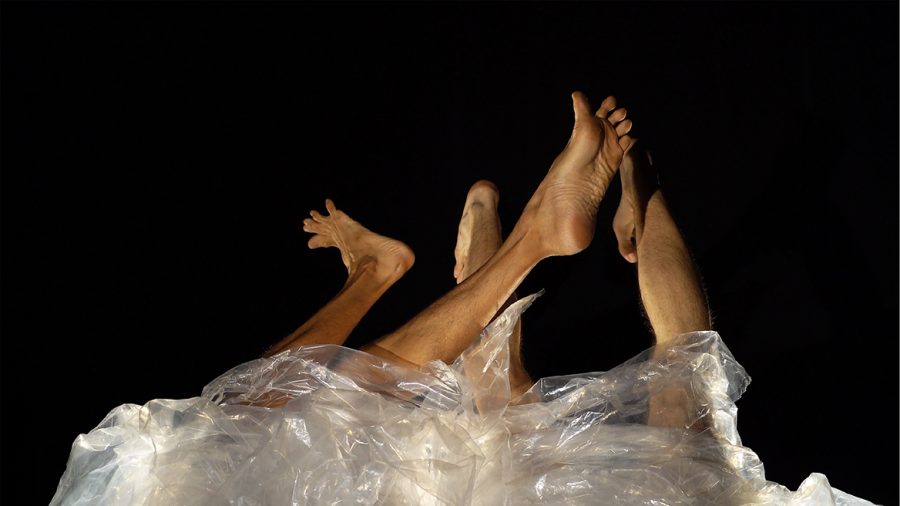 Discussion with the artists on October 4

Go on a journey through the narrow and intimate corridors of Hoor’s mind, the world of her dreams. Dreams have become the only private and secret place left for human beings. There, (self-)consciousness closes its eyes, making way for repressed desires, old memories, and daily details to intertwine and create their own magical scenarios and cinematic sequences every night. 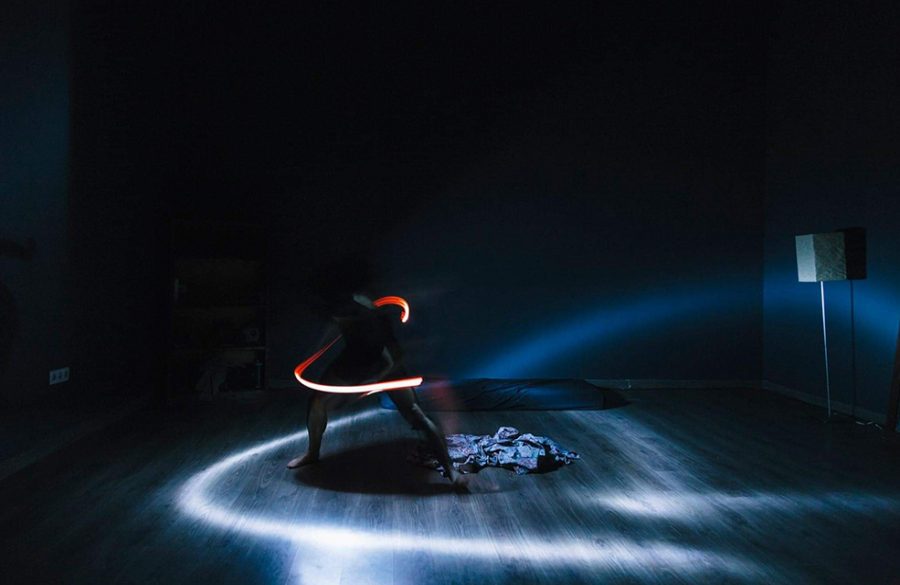 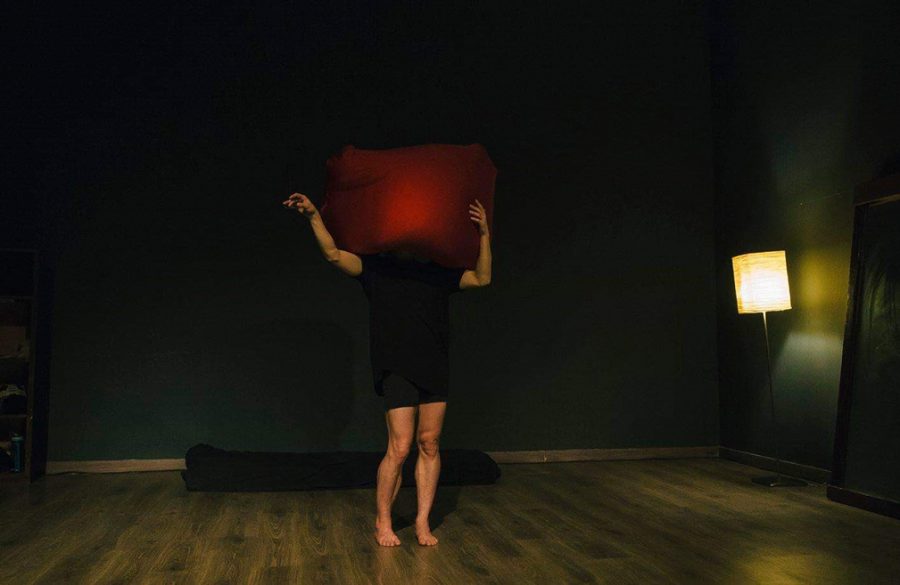 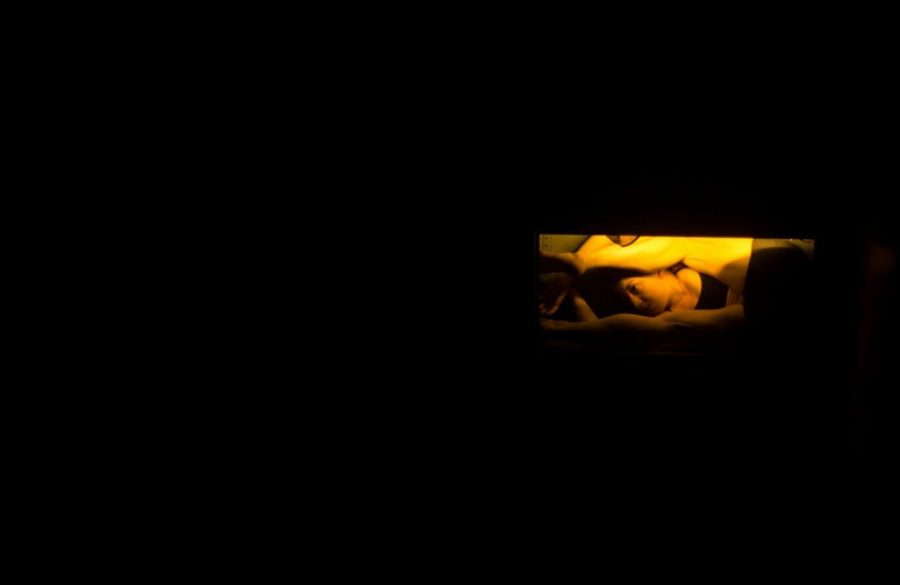 A Syrian contemporary dancer and choreographer, Hoor Malas graduated from the Ballet School in Damascus. In 2006, she co-founds the Sima Dance Company. In 2007, she completes a BA in Dance at the Higher Institute of Dramatic Arts of Damascus. In 2008, she obtains a Diploma in Contemporary Dance from the Northern School of Contemporary Dance (Leeds, UK). Her choreographic works include Wishing I was stone (2014), Above Zero (2015), Regression (2016), Three Seconds (2018), and Hanging (2019).

A Syrian theatre maker, Mayar Alexan graduates from the Acting Department of the Higher Institute of Dramatic Arts of Damascus in 2013. His latest projects as a maker are Incomplete (in collaboration with Petra Huskova and Juliana Sokolova, 2016), A Ticket to Atlantis (in collaboration with Lina Issa, 2016), Three Seconds (2018), and Hanging (2019).

After a brush with death and two years of rehabilitation to be able to walk again, life offers Raul a second chance. During the month when he is bedridden in the hospital, he develops an interest in cells: how do they change during trauma and how does the body undergo this transformation? In this duo that mixes Butoh and contemporary dance, each performer represents a cell of the same body. Raul digs into the flesh until he reaches fear, rage, madness. From this vulnerability emerges a body filled with contractions, spasms, and release. In this cycle, death is merely rebirth. 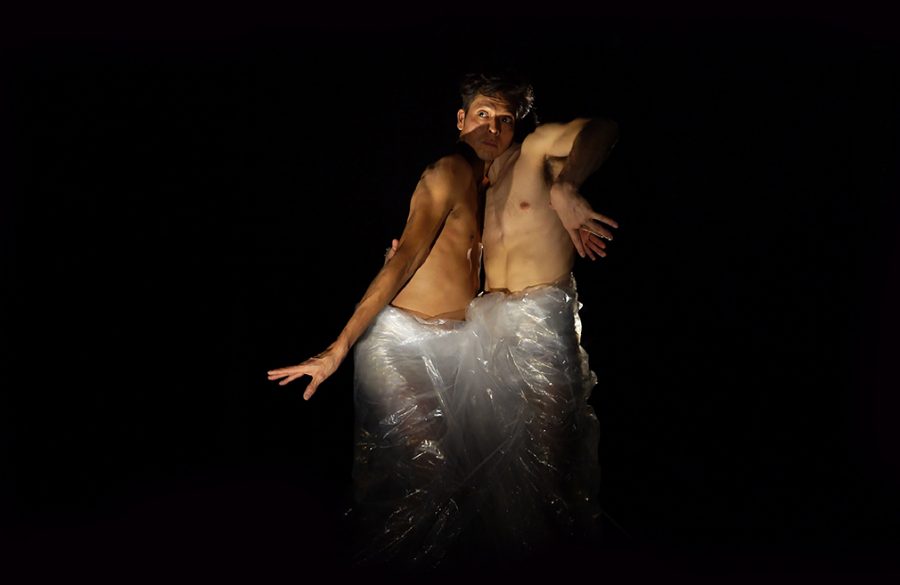 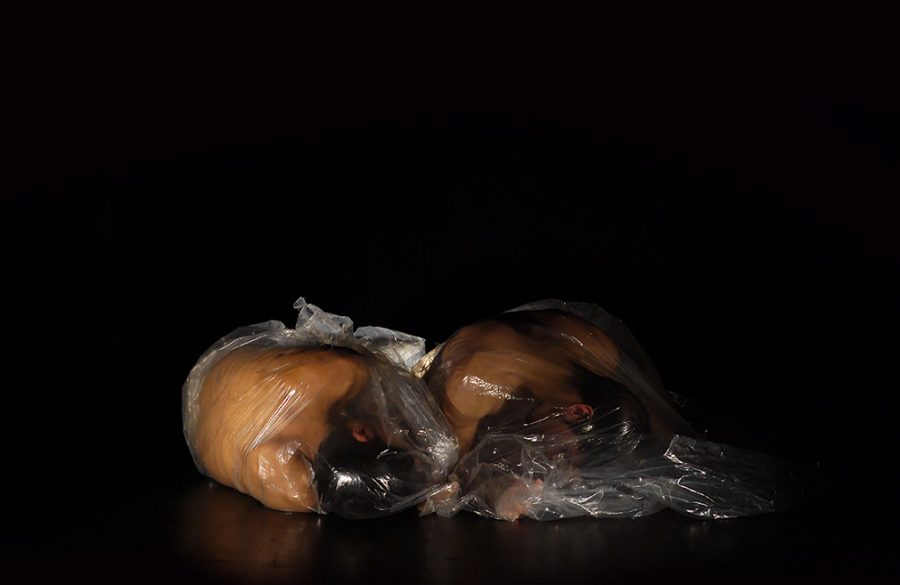 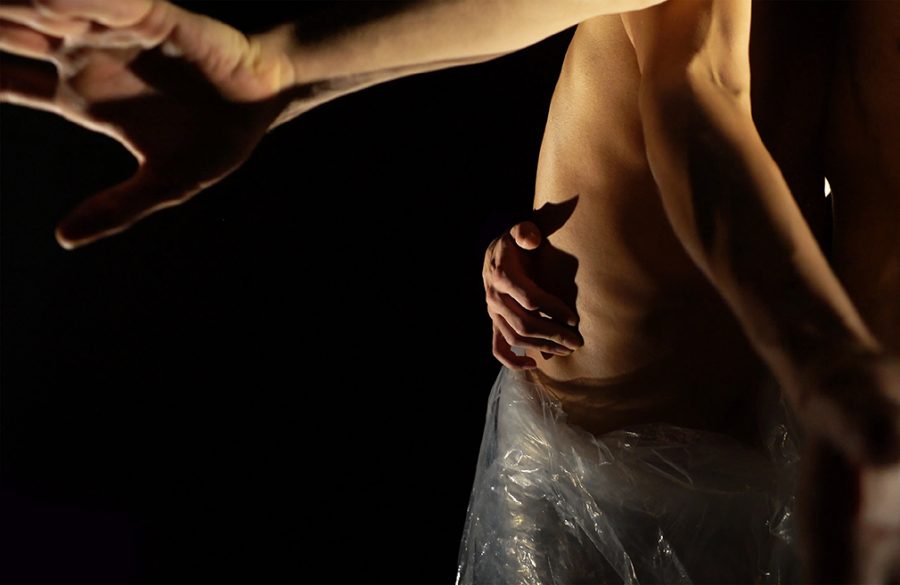 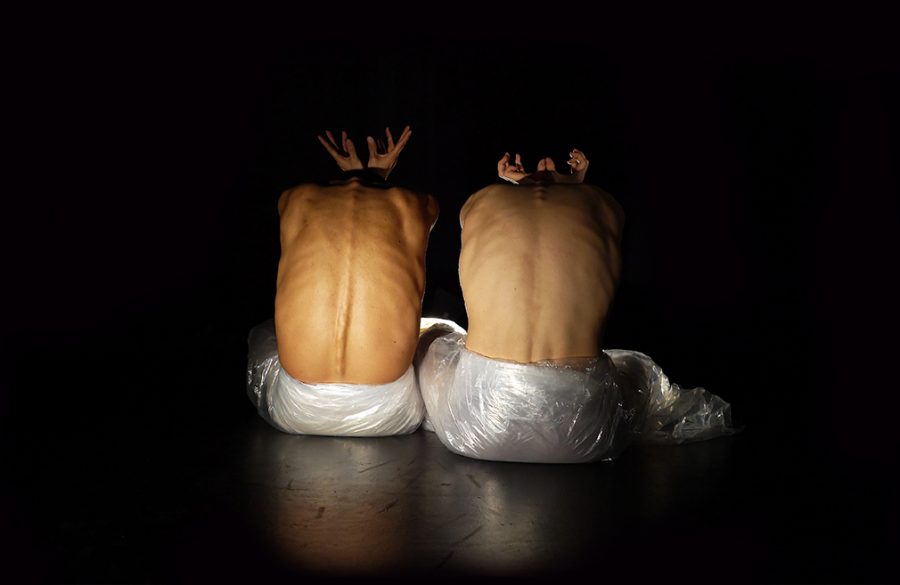 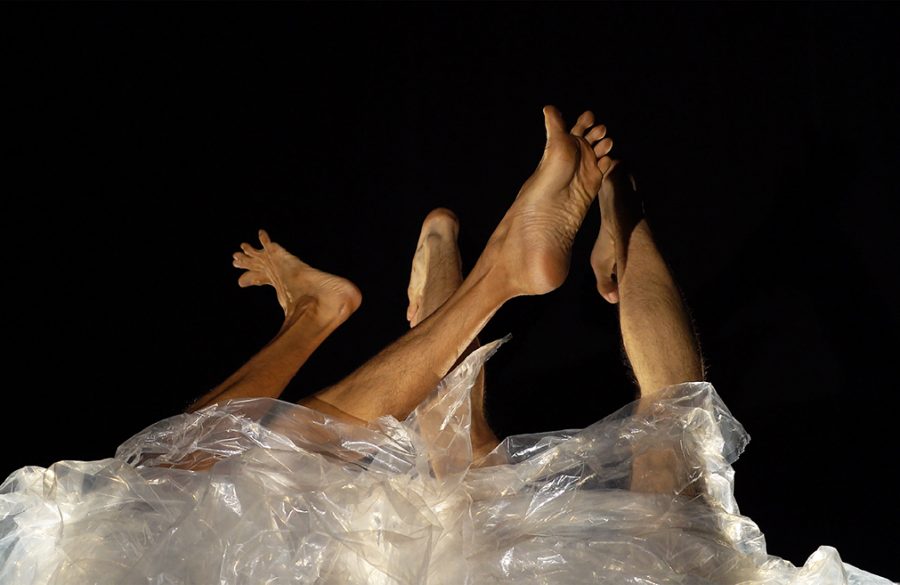 After a month spent in a hospital, I started to become interested in cells. How are they transformed during trauma and how does the body undergo this transformation? I wanted to approach body movement through the concept of dead cells to allow the emergence of new gestures. By exploring the movement of cells – their shape, their movement, their fusion, their deformations – I dug deep into the human body, where I discovered fear, anger, and madness. From this vulnerability comes a body loaded with contractions, spasms, and release. Each of our cells contains all our DNA information. In this duet, each dancer represents a cell in the same body, with an organic and authentic movement.

After graduating from École de danse contemporaine de Montréal in 2005, Raul Huaman performs as a dancer for Cas Public (Intimate Diary) and Sinha Dance (A Matter of Life & Breath). In 2007, he moves to Europe to pursue his career as an independent performer and choreographer. Inspired by Candace Loubert’s creative research, he applies his experiences and notions of life to merge elements of Butoh with contemporary styles. After creating and presenting several pieces, he decides to continue his studies at Concordia University, where he specializes in creation.

Valmont Harnois graduated from the Cégep de Saint-Laurent Dance program in 2017. After beginning his career in urban dance, he is attracted to stage work, particularly to the exchanges between street dance and contemporary dance. In the summer of 2019, he dances for Martin Messier at the FTA, for Danse à la Carte, and at Festival Quartiers Danses in Montréal. He currently participates in various popping battles while integrating himself into the contemporary environment by continuing his studies in creation at Concordia University. In 2020, he performs in Festival 100Lux with Gadfly.

Rebeca Elias is an artist and an observer. She is born and raised in Paraguay, where she becomes interested in memory and movement. In that process, she connects and grows with people involved in diverse forms of creation, such as music and theatre. She starts making short films at an early age with her cousins and friends, slowly developing a focus. She moves to Montréal at the age of 19 and is currently studying film production at Concordia University. She enjoys ghost stories and cooking as forms of storytelling. 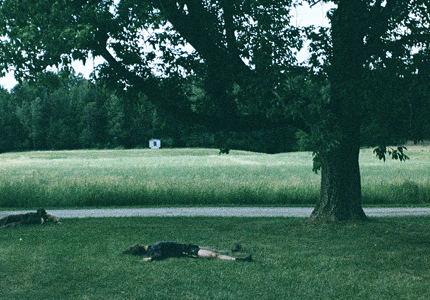 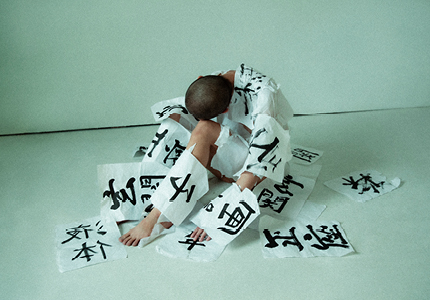 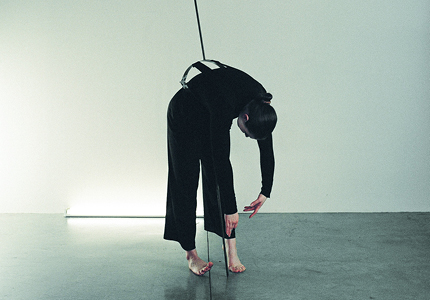 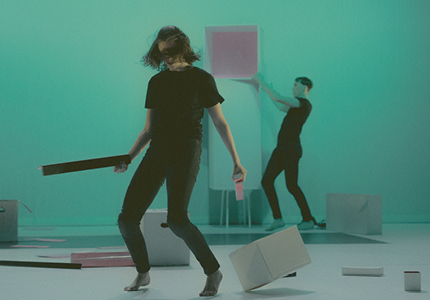 Julia B. Laperrière & Sébastien Provencher
Dec. 02 to 05, 2021
We use cookies and similar technologies to understand how you use our website and provide a better experience. By continuing to navigate on our website, you agree to the use of cookies on this website.Ok