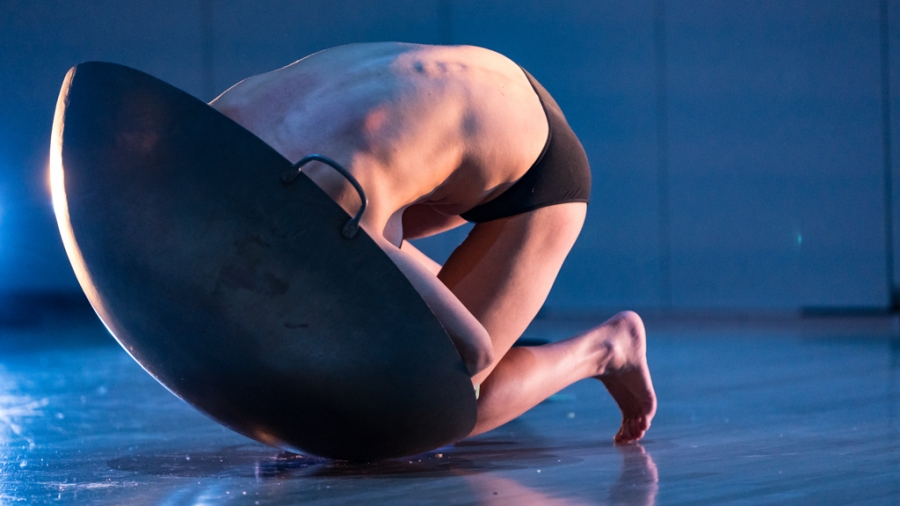 A talk with the artists will take place during the intermission

Initially, the program included two choreographers from Ontario and two from Québec. Due to the current situation, we are only presenting the Québec choreographers.

CanAsian Dance’s KickStart program, in collaboration with Tangente and Festival Accès Asie, commissions Canadian choreographers, challenging them to develop and perform a short work that represents a significant new direction or constructive disruption in their approach to choreography. This year’s program features two choreographers from Ontario and two from Québec. 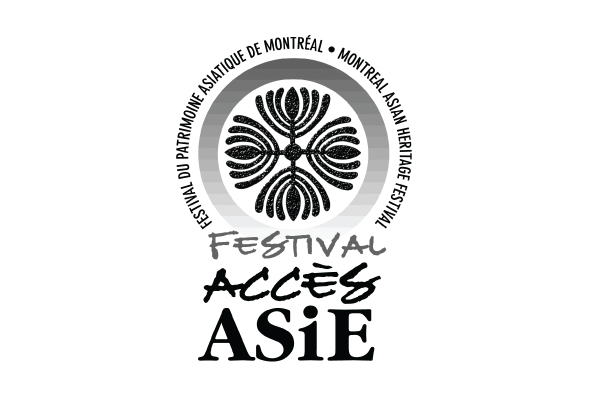 Exploring her family’s Taoist past, Charo revisits different healing rituals that she experienced throughout her life. In this work, she shares the suffering caused by the cohabitation of buried languages that have tugged at her for a long time: on one side, the rational shēn yùn; on the other, Butoh. Risking a meeting of these two forms is akin to mixing water and oil. If the task is impossible, the pursuit remains rich and surprising. Jerky forward thrusts, an inner quest embodied in a series of selfless movements within a soundscape that takes the spectator on a spiritual journey. 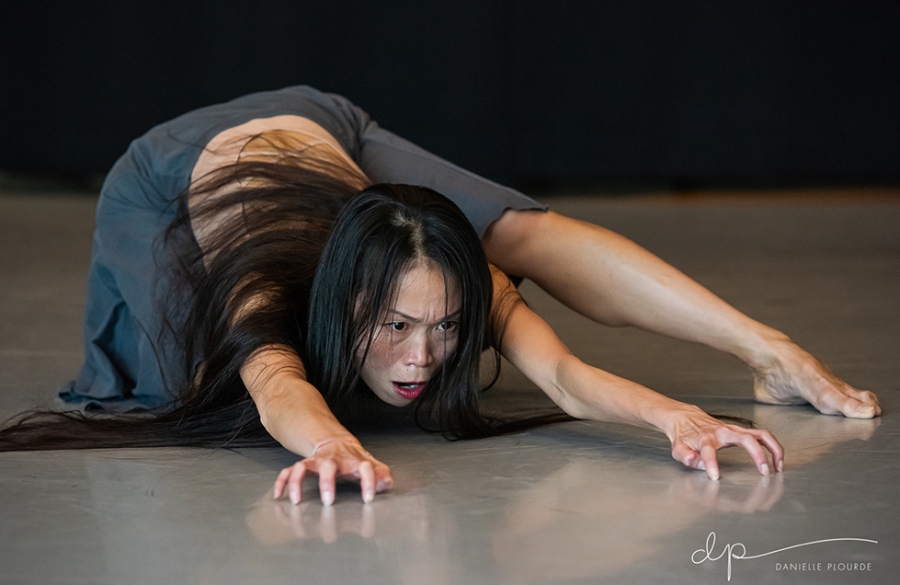 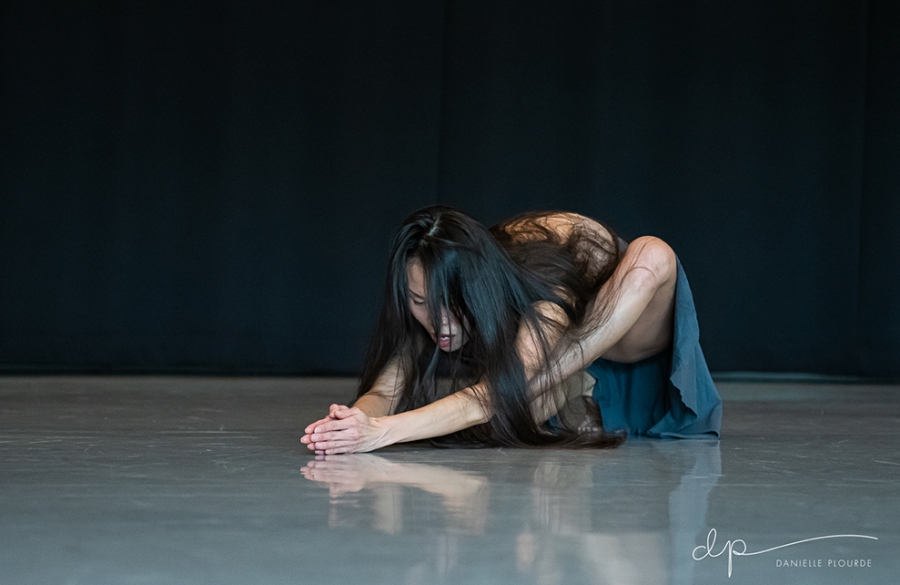 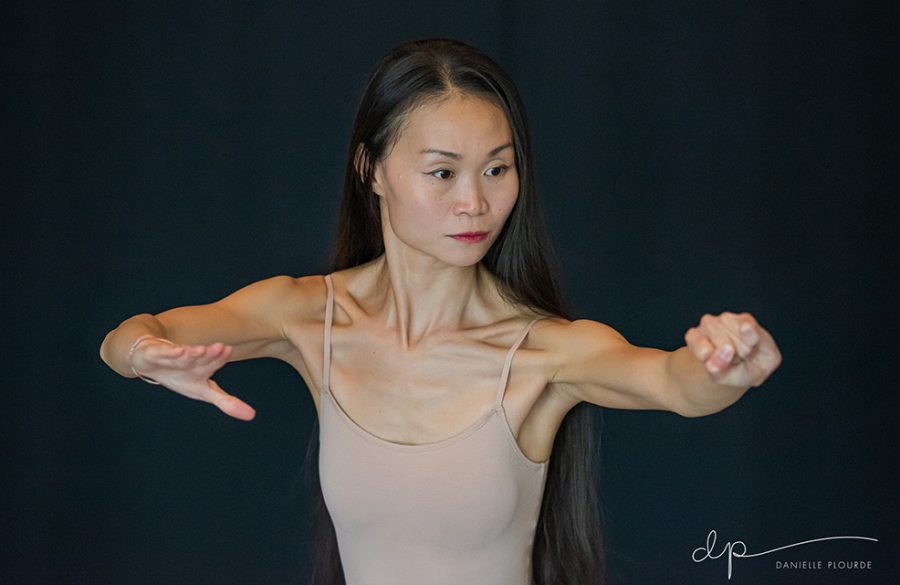 My parents sent me to learn Chinese classical dance in kindergarten. I fell in love with the feminine grace, strength, and the inner body spirit “shēn yùn”. The inner body spirit of this ancient art is more than a dance to me. In 2015, Butoh opened my universe: I discovered dance that originated in selfless body intentions; we let our muscle memory initiate the movement. This organic movement provokes thoughts and feelings that are buried deep inside our belly, beneath our conscious awareness. To put these two disciplines together is like mixing oil and water but a beautiful quest. In my creative process, I like to intertwine this attention to the inner body spirit with selfless intentions.

This internal work allows me to centre myself and explore inner spaces between my bones and body cells. I also include the water element, which creates an eternal flow of “Qi” throughout my body as a strong support.

Trained in modern dance and Chinese classical dance, Charo Foo Tai Wei arrives in Québec City in 2005, where she trains in contemporary dance at École de danse de Québec. From 2007 to 2013, she performs in Robert Lepage’s production The Blue Dragon (Ex Machina) as an actress, dancer, and choreographer. Since 2010, Charo has traveled to North America, Europe, and Asia to give classical Chinese dance workshops and to perform in festivals. In 2015, she discovers Butoh with Natsu Nakajima, Yukio Waguri, Atsushi Takenouchi, Yumiko Yoshioka, and Rizhome Lee. Recently she attended Tadashi Endo’s workshop which inspires her to research selfless body initiation. Now, she combines Classical Chinese dance and Butoh to develop her own choreographic language.

Based in Montréal, David Blouin has worked as sound engineer and designer and technical director for over twelve years. He has a diverse body of work in theatre, dance, music, and contemporary art. He collaborates with Usine C, Mayday Danse, Elektra, Le Carré des Lombes, L’orchestre d’hommes-orchestres, and more. In 2019, he meets Dimitris Papaioannou in Montréal and has since started a new collaboration with the choreographer as their on-tour stage technician. David is also a self-produced multi-instrumentalist driven by energetic existentialism. His musical compositions are driven by intense vibrations that create an open and evasive connection in his body-mind.

Born in Brooklyn, Dulcinea Langfelder studied dance, mime with Étienne Decroux, and theatre. She moves to Montréal in 1978 to work with the troupe Omnibus. She founds her own company in 1985, creating multidisciplinary works that have toured extensively around the world. Vicious Circle (1985), The Lady Next Door (1989), Hockey! O.K.? (1991), Portrait of a Woman with Suitcase (1994), Victoria (1999), Dulcinea’s Lament (2008), Pillow Talk, an essay on dreaming (2016), Cheek to Cheek; love with a capital C (2019), and a musical collaboration with Philippe Noireaut are her major works. She created more than twenty choreographies for theatre, musical comedy, television, and cinema.

Julie Pichette is a multidisciplinary artist whose fields of exploration are dance, visual arts, and scenographic costumes. A graduate of L’École de danse de Québec, Julie perfected Japanese Butoh dance and Bharatanatyam. As a performer, choreographer, scenographer, and costume designer, she participates in various artistic events. In 2011, she completes a Master’s degree in Visual Arts in Creation at Université Laval (scenographic costume, visual arts, and Butoh dance). Her work focuses on solo choreographic creation for herself based on the scenographic costumes she designs and creates. In recent years, she has been exploring group choreography tinged with Butoh.

Rodolphe St-Arneault graduated from the Cégep de Saint-Hyacinthe theatre school. He is a light designer and stage manager, mostly for circus and dance projects. He has worked with Julie Vincent, Yves Dagenais, Johanne Madore, Jamie Adkins, Mélanie Demers, and the National Circus School. He conceptualizes private events in Québec and around the world. He has also shown his work as a photographer in a few exhibitions.

How does one reconnect with one’s roots once settled in a new land? Winnie dives into her estranged and distant relationship with Hong Kong, her birthplace, by moving through the complexities of her diaspora and her queerness. She explores a traditional Chinese cooking instrument, the wok, and immerses herself in wok chi – the wok energy – which gives Cantonese cuisine its distinct taste. How can the body become both the cook and the recipe? By sensorially examining the methods and the materials used in Cantonese cuisine, she aims to listen to, to connect and move intimately with the external: material, space, and audience. 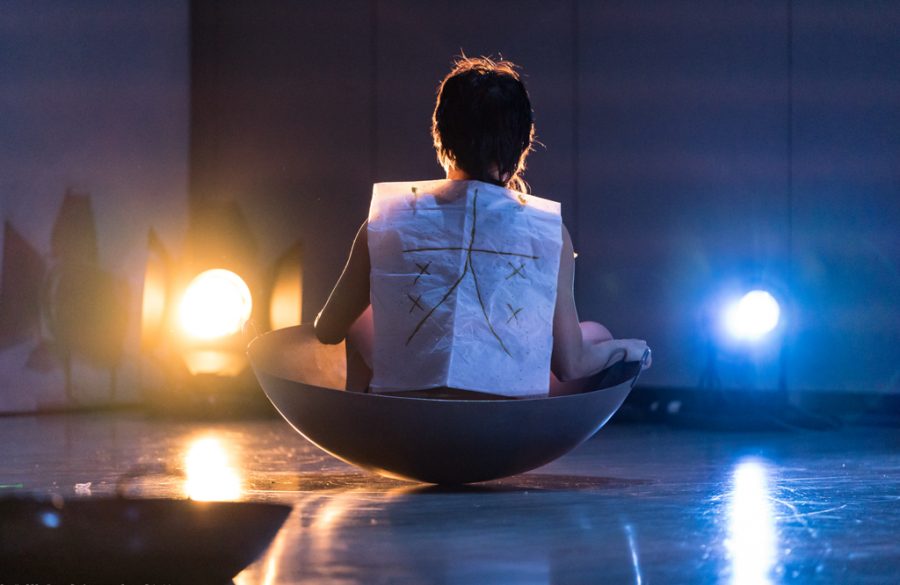 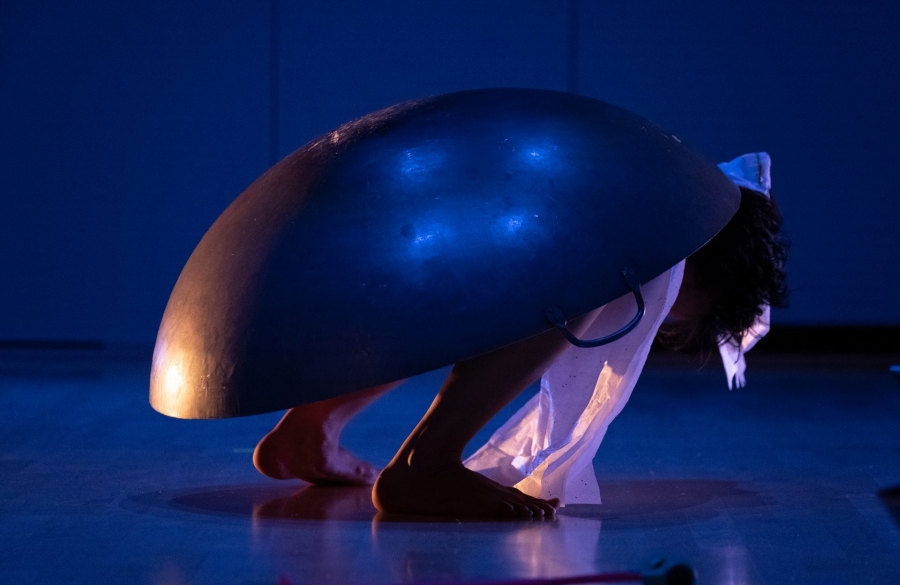 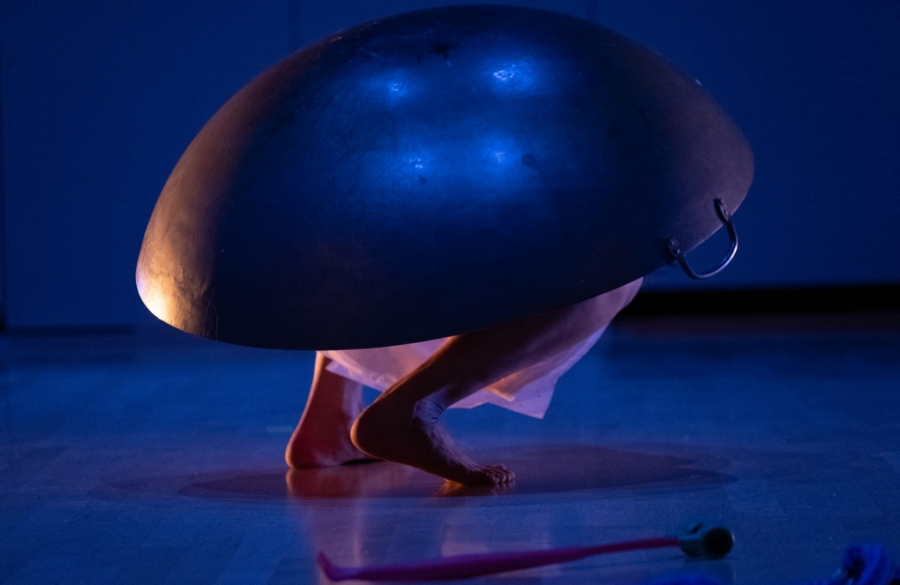 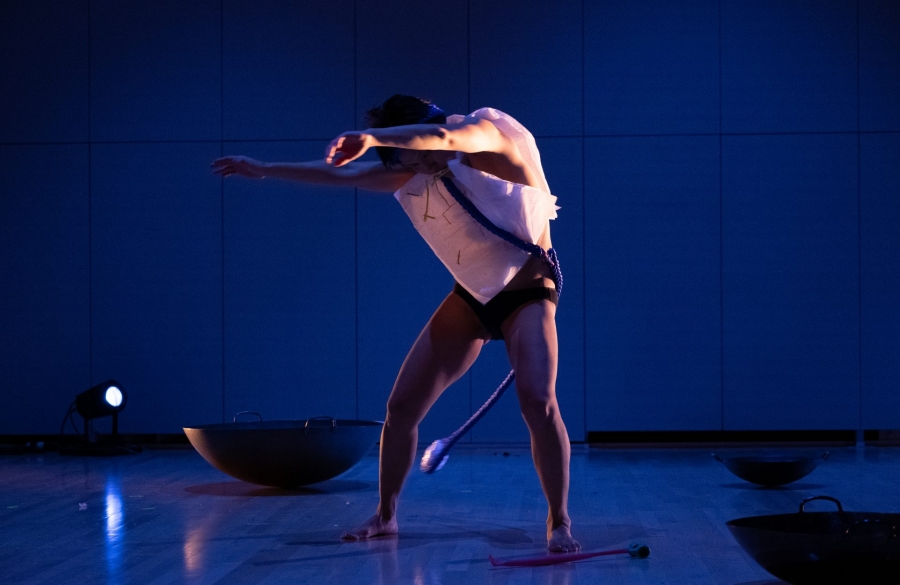 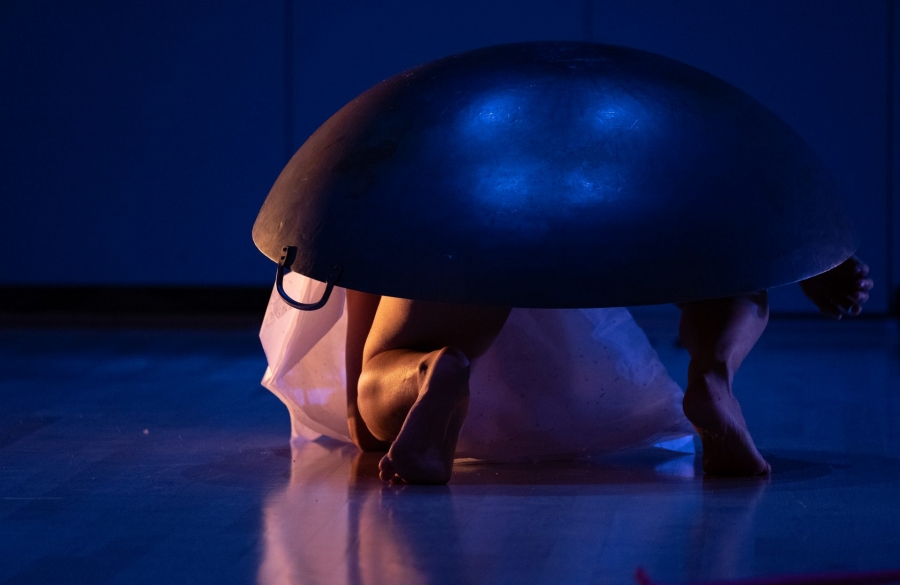 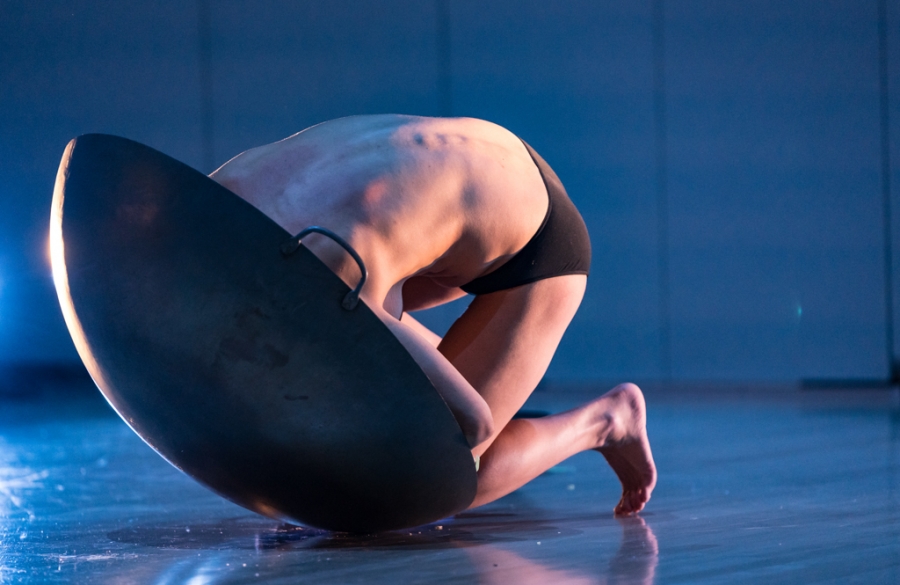 Special thanks to Nate Yaffe, Clara Furey, and Geneviève Allard

My creative process involves using my senses (touch, see, smell, taste, sound) and the embodiment of materials, which have been inspired by my ongoing research and relationship with my queer identity, Chinese diaspora, and notions of pleasure and play. I continue to explore these topics by connecting to my Chinese culture and, specifically, I aim to merge the technique and methods of Cantonese (people from southern China) cooking into my diaspora-based research and dance-making process. I wonder: can the process of Cantonese cooking be translated into a dance choreography? I’m also curious to know if I can embody concepts such as braising 燉, steaming 蒸, pan-frying 炒, marinating 醃, and wok-chi 鑊氣 (the flavour, tastes, and “essence” imparted by a wok, which is a specialized iron pan exclusively used in Cantonese cuisine). By sensorially examining methods and materials used in Cantonese cuisine, I aim to connect, listen, and move intimately with the external: material, space, and audience.

Winnie Ho (Superhova) is a dance performance artist who seeks to explore and expand ideas of intimacy, empathy, and embodied eroticism. She continues to explore these topics by interacting with organic/inorganic matter and connecting with her Chinese-diaspora and queer identities. Furthermore, she questions conventional roles of spectatorship in performance and creates practices whereby boundaries between spectator and performer can be dissolved and redefined in the felt presence of immediate experience. Winnie seeks to activate more of the present moment in performance in relationship to time, space, and spectatorship.

Hanako Hoshimi-Caines is engaged with dance, performance-making, and philosophy as a way to see, feel, and love better. And what she means by love is an ambiguous kind of knowledge that is embodied, transformative and involves time and intimacy with things. Interested in the performativity and humour of alternate logics, she gets much inspiration and material from the radicalness and disobedience of her kid’s senses. Hanako has worked and collaborated extensively in Montréal and internationally.

Métis multidisciplinary artist Moe Clark is a nomadic songbird with wings woven from circle singing and spoken word. Originally from Treaty 7, she’s called Tio’tia:ke (Montréal) home for over a decade. Moe fuses together vocal improvisation with multilingual lyricism to create meaning that is rooted in personal legacy and ancestral memory. Apart from performance, she facilitates creative workshops, she produces festivals and performances, and she mentors emerging artists. Recently, she launched nistamîkwan, a transformational arts organization with an emphasis on intercultural collaboration.

Live show
Hugo Dalphond + Hélène Messier
Apr. 15 to 18, 2021
We use cookies and similar technologies to understand how you use our website and provide a better experience. By continuing to navigate on our website, you agree to the use of cookies on this website.Ok