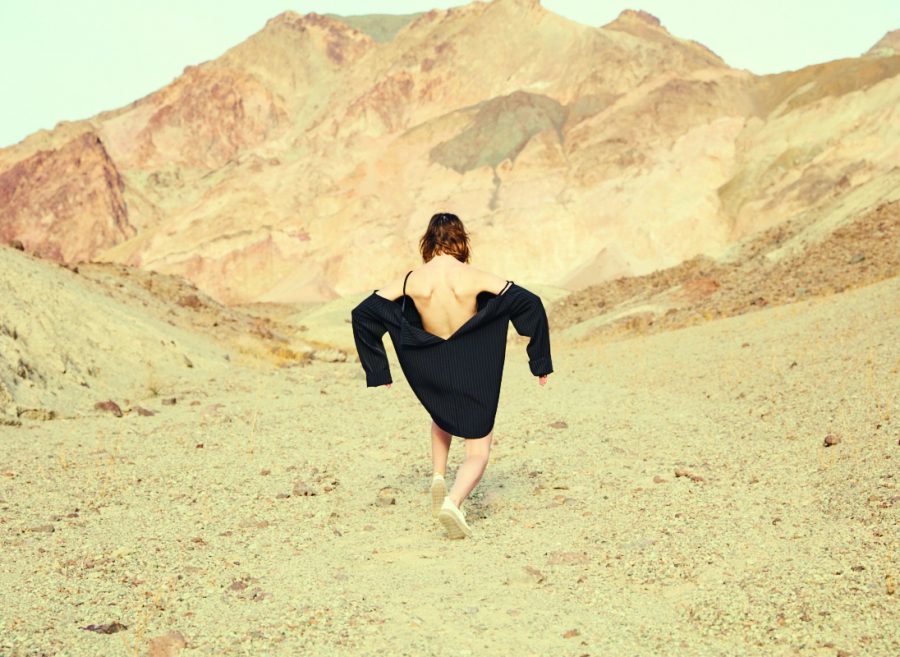 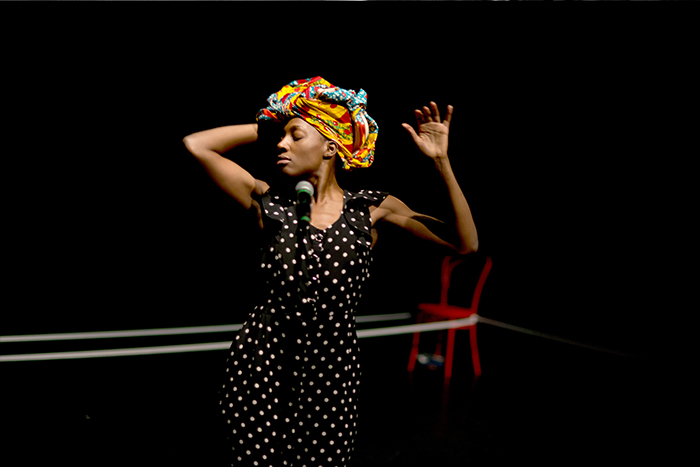 Alesandra narrates the journey of an Afropean woman through dance and physical theatre, spoken word and song.  She plunges us into personal memories of her upbringing through the winding roads of Africa and Europe, investigating the complex experience of identity. Like the dancer, the expressionistic dancing is a hybrid of urban, African and Euro-contemporary. While playing with masks, roles and attitudes through the distinct perspectives of four figures – herself, that of a club girl, Michelle Obama-like politician and dance hall reggae singer – the performer enters the space of the audience.  Shifting the mood from amusement to menace, we are kept on the edge of our seats. She wants us to know that what you see is not always what you get. 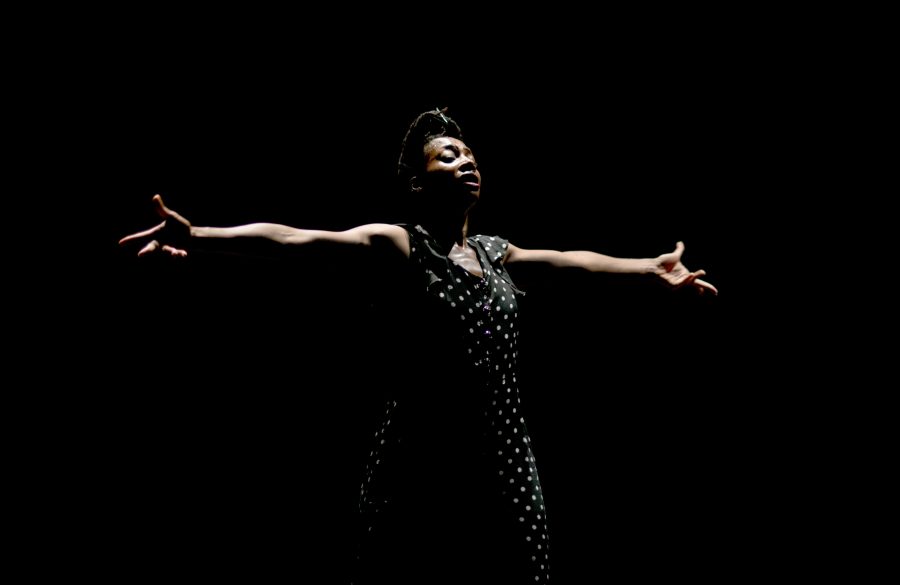 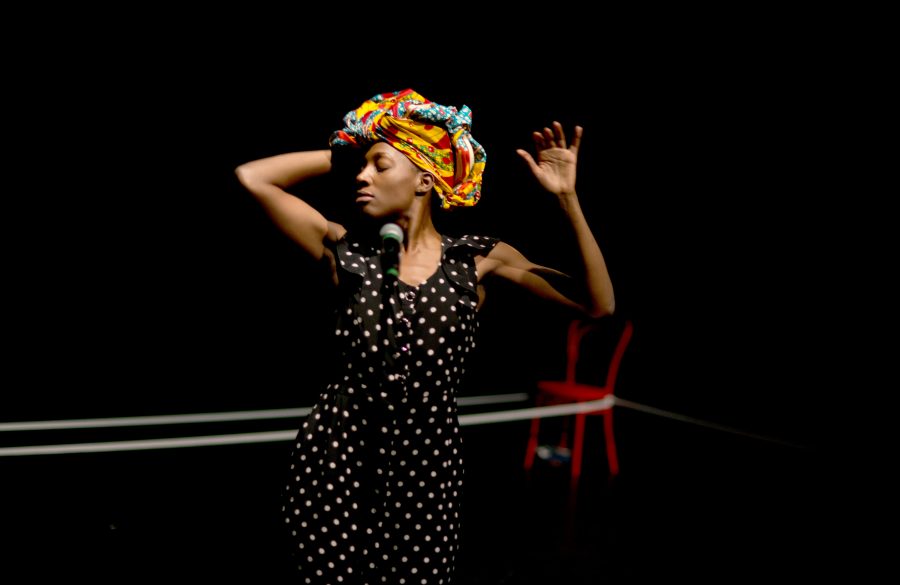 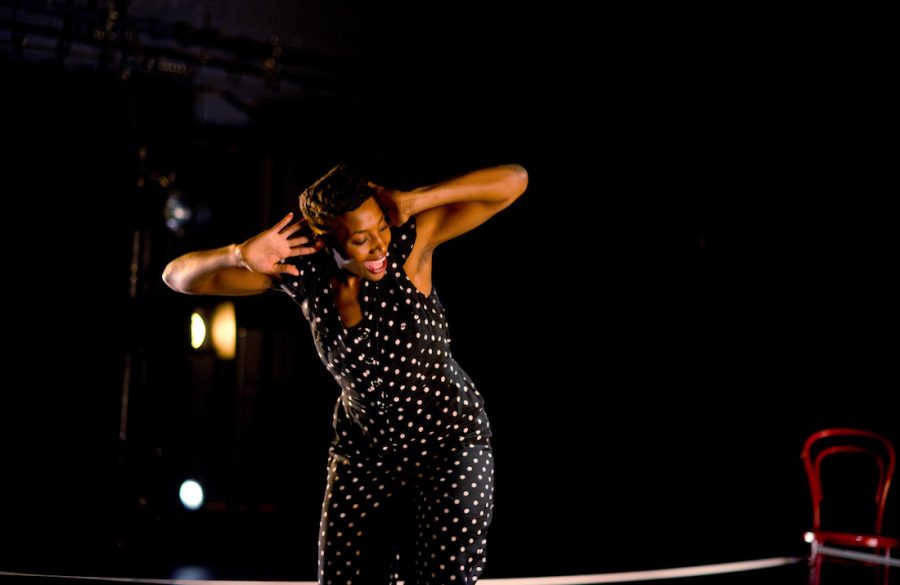 Initially started with a research during a residency at Ecole des Sables and the reading of a lot of books about race, identity and gender, Ceci n’est pas Noire will be a 30-minute solo, performed by Alesandra with live music by Ayanna Witter Johnson. In it, she will draw on her own experience as a mixed-race woman living and working in Europe and Africa; the changing perceptions depending on context, and the resulting multitude of masks, roles and attitudes. Structurally, the piece will use playful game structures to involve the audience, illuminating Alesandra’s personal knowledge of the fact that what you see isn’t always what you get! Through using her own, personal experience, Alesandra opens up universal themes about the experience of identity. The solo will feature original compositions by cellist and singer Ayanna Witter-Johnson. In the process Alesandra received feedback on the structure and content of the piece. Working with dramaturge Funmi Adewole and theatre maker Sophie de Vries, the rehearsals focused on: developing the physical vocabulary character and voice work the narrative arc the use of props. Because Alesandra is performed in the solo herself, she originally worked with rehearsal director Ingrid McKinnon. Ingrid drew on her substantial knowledge about performance, technical precision and kinesiology to push Alesandra’s performance.

International performer, choreographer, teacher Alesandra Seutin was born in Harare, Zimbabwe, grew up in Brussels and now lives in London. She studied dance in different parts of the world including Europe, Africa and the United States. She holds a Diploma in dance theatre from Laban in London and a degree in choreography and performance of the Middlesex University. Alesandra Seutin also further trained at the École des Sables of Germaine Acogny (Senegal), where she has also worked with choreographers Nora Chipaumire, the late Pierre Dousaint, Flora Thefaine, Pedro Pauwels, Gabriel Smeets, Rui Moreira and David Zambrano. Alesandra  has been running Vocab Dance Company (VDC) since 2007. She combines African traditional dance with contemporary dance and Hip Hop to create distinctly Afro-European dance theatre. Few other British artists are working to explore what African dance can become when fused with other dance forms to explore contemporary issues. In addition to the body of work she has build for Alesandra Seutin I Vocab Dance Company since it’s inception in 2007, she has created work for Phoenix Dance Theatre, 12º North Dance and most recently State of Emergency’s 2014 tour as an independent choreographer. She has also acted as Movement Director for two plays at Theatre Centre. Her work has been performed at UK venues such as Sadler’s Wells, The Queen Elizabeth Hall, The Riley Theatre, Laban Theatre, The Place Theatre, Stratford Circus, The Yorkshire Playhouse, The Arcola, Lindsey Theatre, Purcell Room as well as internationally at Theatre Louis Aragon (Paris, France), Tanzhaus nrw (Düsseldorf, Germany), Harbourfront Theatre (Toronto, Canada), Goethe Institut (Abidjan, Ivory Coast) and IFM (Antananarivo, Madagascar). In 2011, Alesandra was selected by Germaine Acogny (‘mother of African contemporary dance’), to be part of the transmission of her technique. Alesandra is now the only UK dance artist to be a certified Germaine Acogny teacher and ambassador. In 2014, Alesandra became an ADAD (The Association of Dance of the African Diaspora) Trailblazers Champion for her continuous contribution as an artist of the African Diaspora in the UK, bridging the gap between African and Contemporary dance. Alesandra Seutin is currently touring her solo ‘Ceci n’est pas Noire’ and working with German company Steptext Dance Project new production ‘Boxom’.

British vocalist, cellist and composer Ayanna Witter-Johnson is a pioneer of Black folk music and is the first non-American to win the legendary Amateur Night at the Apollo Theater in Harlem – and one of only a handful of people to win with an original composition. A former emerging Artist in Residence (EAR) at London’s Southbank Centre, participant in the London Symphony Orchestra’s Discovery Panufnik Young Composers Scheme and the holder of music degrees from Trinity College of Music (UK) and Manhattan School of Music (US) Ayanna is an emerging composer/arranger/performer of versatility and depth. Ayanna Witter-Johnson influences range from artist such as Betty Carter,Luciano Berio, Billie Holiday, Thelonious Monk, Charles Mingus, Peter Eotvos, Johann Sebastian Bach, Ella Fitzgerald, Steely Dan, Michael Jackson, Frank Zappa, Wayne Shorter,Björk , Bobby McFerrin, Carla Bley, Carole King, Nina Simone and Mariza.

“Where is home?” This is the story of a young girl who was never certain if she was asleep when she walked or awake when she slept. With The Sleepwalker, the artist brings us into an emotional and poetic journey between lucid dreams and nightmares. Through fragments of children’s games, spoken word, social African dances, and day to day gesture, a story unfolds about the disorientation of living in various temporalities and territories. This choreographer, born in the UK, and raised in Nigeria, took inspiration from her personal life experiences. In this unconventional folktale, she embodies both the narrator and all the characters, speaking to us intimately and directly. 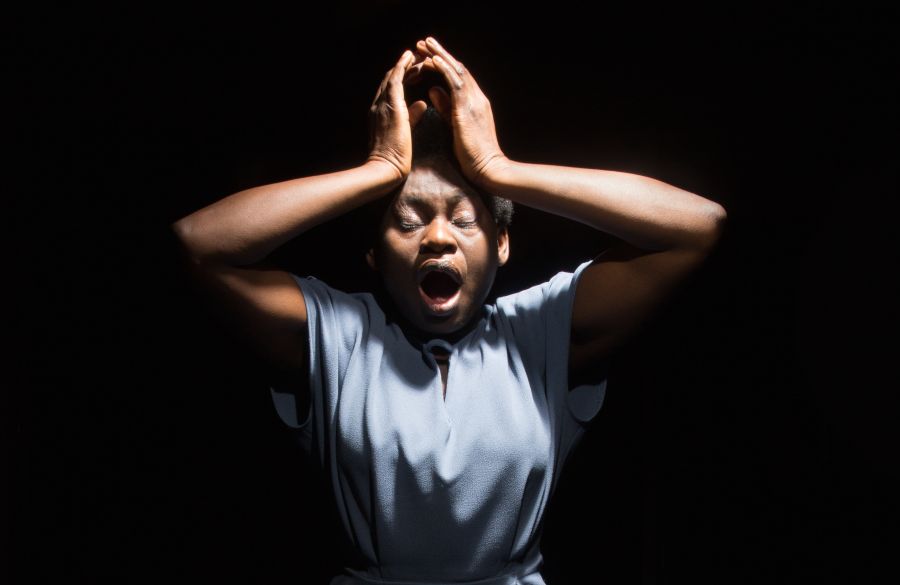 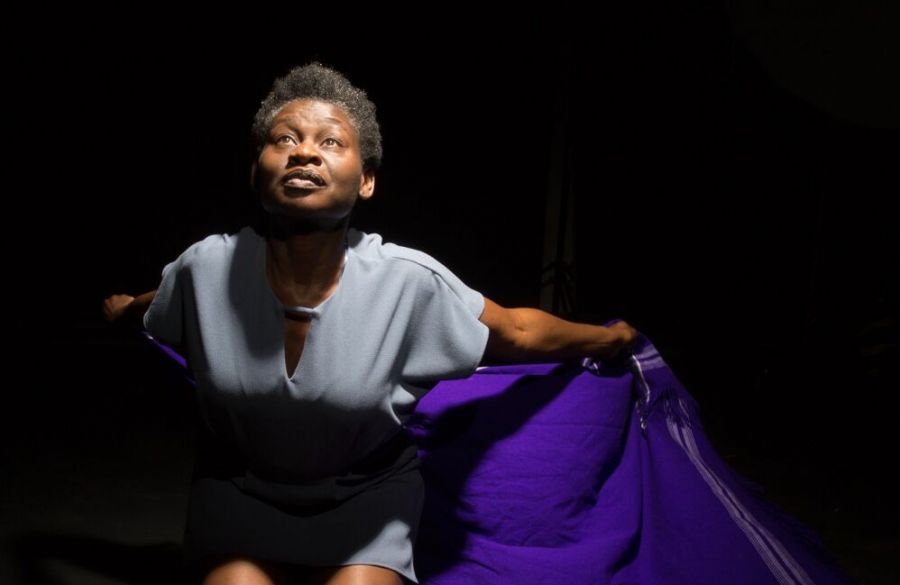 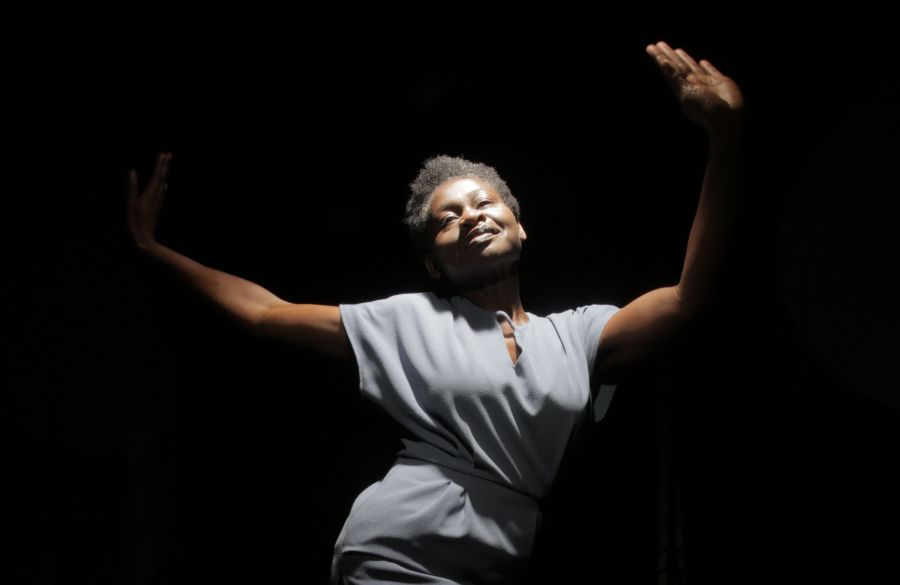 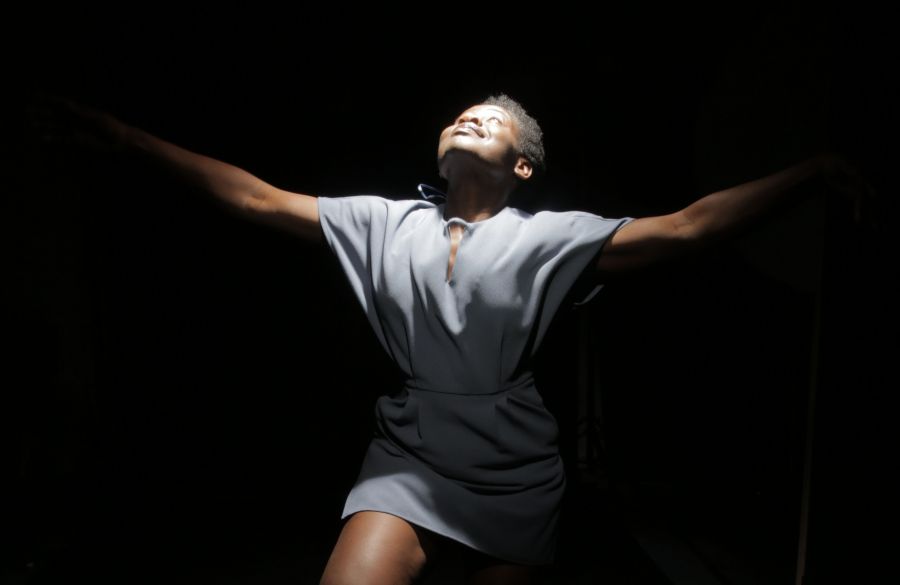 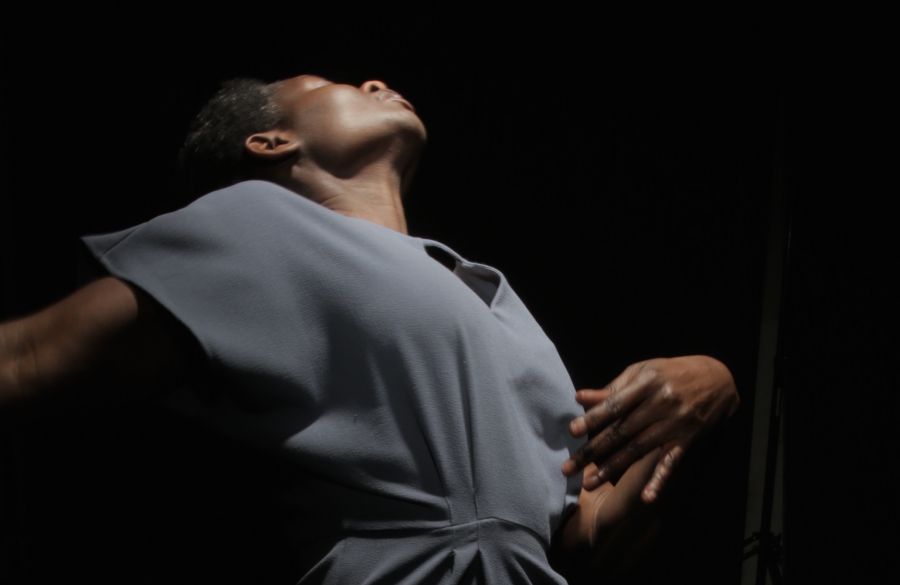 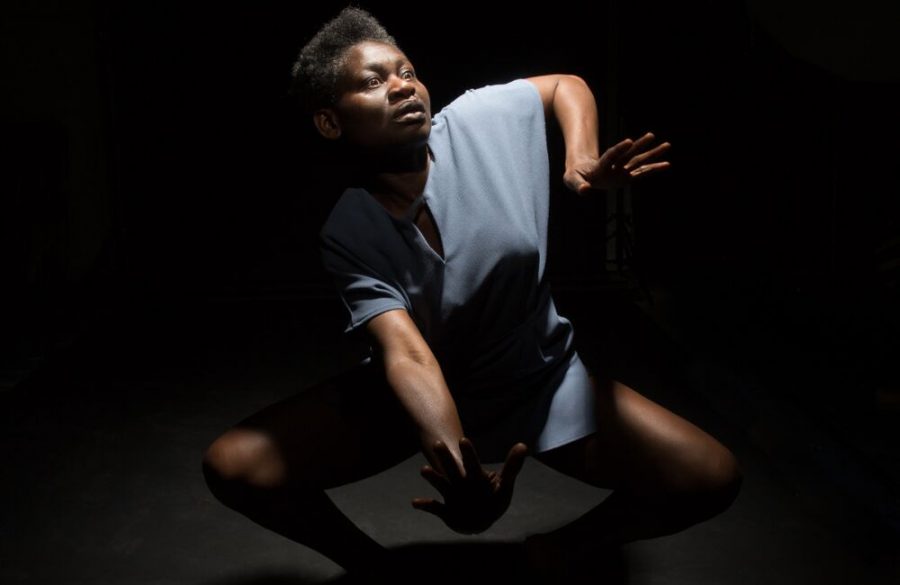 The piece could be described as movement based theatre. It is created using the format of a storytelling session as a structure. However the story of the young girl, who is unnamed, is not conveyed through a straightforward telling. As I am testing the boundaries between narrating and performing, telling and showing I juxtapose narrating and performing. I play children’s games, perform movement sequences, which explore emotion and evoke memories or nightmares through spoken word. I return to the narrator role at key points such as the middle and the end in order to maintain the sense of an unfolding narrative. The story is therefore made up of fragments, but there is a sense of a complete journey which is more emotional than intellectual. The movement language of the piece is drawn from pedestrian movement, every day gesture and African social dances. The piece is inspired in part by my experience of being born in Britain but growing up in Nigeria, of returning to a home I had never been, of not being sure I understood the culture that was mine and learning nevertheless to belong.

‘Funmi Adewole My solo work is usually character based and often involves text. I am interested in how people come into being: the development of attitudes, beliefs, points of view, the arrival at decisions, and the exploration of questions. My main grounding in dance is in African social dance forms which I explore in relation to other practices such as butoh, physical theatre and contact improvisation. My background is in African dance-drama, physical theatre and spokenword.I toured with Physical/Visual theatre and African dance drama companies between 1995 and 2005. My credits include performances with Horse and Bamboo Mask and Puppetry Company, Ritual Arts, Mashango African dance and Music Company, Adzido Pan-African Dance Ensemble, Artistes-in-Exile and the Chomondeleys. I enjoy telling folktales to groups of children. The Sleepwalker is my second solo piece for adults.

In these turbulent times of identity politics and fervent international conversations on race, Ghislaine questions us, sometimes directly, “How does the colour of our skin create our perception of others”? She is an ebony-skinned multi-lingual cultural hybrid: French-born, raised in Ivory Coast, an emigrée to Canada. This artist always yearned to be a Disney princess in a cartoon universe of white beauties, having auditioned for the role of a blonde. Skinbox seeks at last to reconcile musical theatre, contemporary dance and new African dance in a single aesthetic form containing spoken word, song, percussion and movement. This expressionist performance, of powerful emotional intensity, opens the possibility for each of us to believe (once again) in the utopia of universalism. 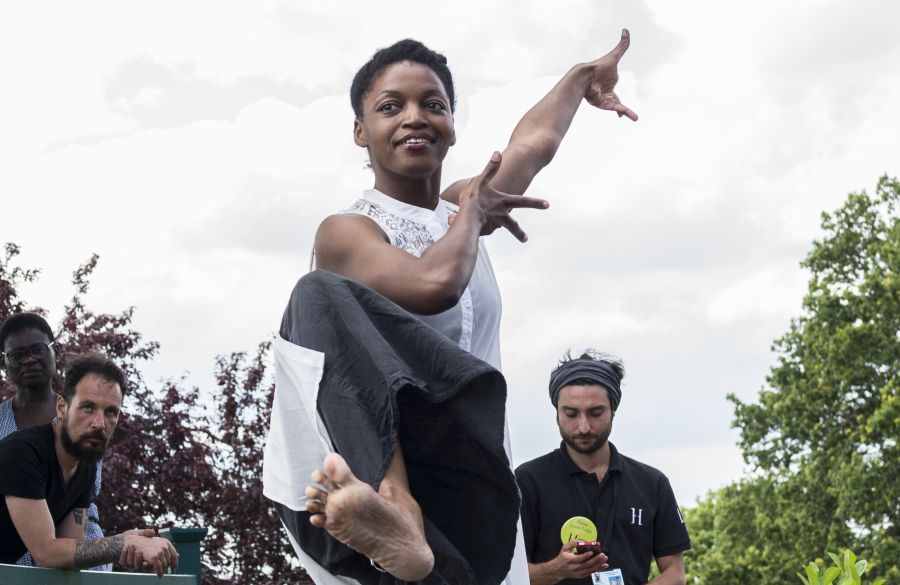 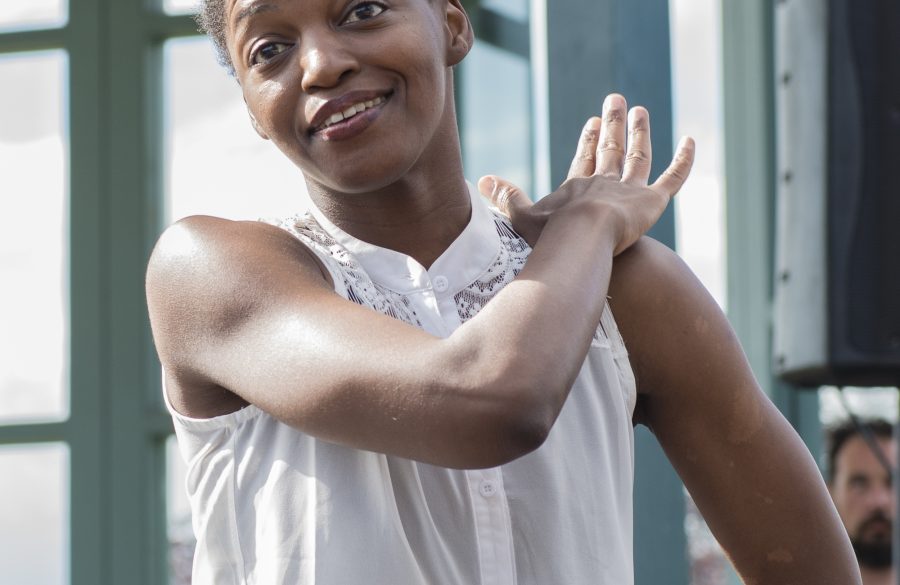 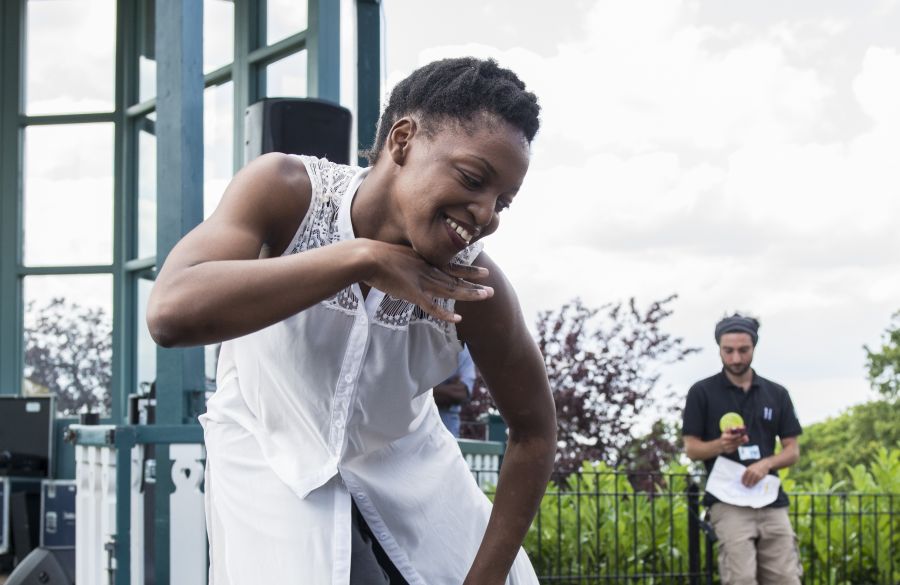 One of the few active black choreographers and dancers in the city, Doté’s work emphasizes a hybrid of contemporary, ballet and African influences.

The creative process started in London after our application for a choreographic exchange between the UK and Quebec was accepted. I started working on the idea of the skin with 3 artists from London: Andrea Queens (dancer), and Funmi Adewole (Dramaturg), Alesandra Seutin (Choreographer/performer).

In Quebec city, where we (the 3 british artists and myself) had a residency during the rebel Bodies Exhibition, I was able to deepen my vocabulary search and clarify the aesthetics I wanted to use for Skinbox. I also played with a symbolic object related to the theme.

For that last step, I would like to include text and songs to my work and start working with my lighting designer on the lighting concept for Skinbox.

Ghislaine Doté grew up in Ivory Coast where she learned dancing, singing and martial arts. In 1997, she moved to Montreal, with that background of physicality and musicality, which feeds her as a performer and choreographer. Since completing her bachelor’s degree in dance at the University of Quebec in Montreal in 2002, she has choreographed and composed her own works. She created Toronto’s critically acclaimed piece L’âmentation  (2002), Performance (2004), Mâle de femme (2006) which was particularly appreciated by Montreal critics, and Variations sur L’âmentation (2007), a work that toured with the Montreal Council for the Arts. Ghislaine takes her inspiration to create not only from music, but also from her career as a dancer. Eclectic, her dancer’s credits include companies, Sinha Danse, Van Grimde Corps Secret, Flak, as well as more commercial stuff: So You Think You Can Dance Canada (2008 finalist), Starmania, (Opera de Montreal et Québec), Cirque du Soleil (corpo). As a singer, she trained in both Musical Theater and Classical voice and also composes her own stuff. Her credits include Award winning group Lyric Theater Singers, The Virgin Courtesan, A Chorus Line, On second Avenue, Fame, etc… Ghislaine’s choreographic work now aims to combine contemporary Dance and Musical Theater. Skinbox’s box creation was funded by the Ministère des affaires internationales et de la Francophonie as well as the British Council.

Jacques Pilon, a Montreal native, studied theatrical production after discovering an interest in stage techniques when he was in high school. He is utterly passionate about lighting and lighting design. Each projector must be there for a reason and play a part in communicating the performing artist’s vision. He began working with Zab Maboungou early in 2009 for Décompte, temporarily filling in for the technical director. The substitution gave way to an initial partnership in the form of the original design of a short piece presented during Festival Transatlantique 2009, Gestes dé/libérés. In May 2010, Montreal by Night was presented at la Société d’art technologique. This was his first official signature to a lighting and sound environment concept for a dance performance. He also works for several Quebec musical groups as a lighting engineer and tour director.