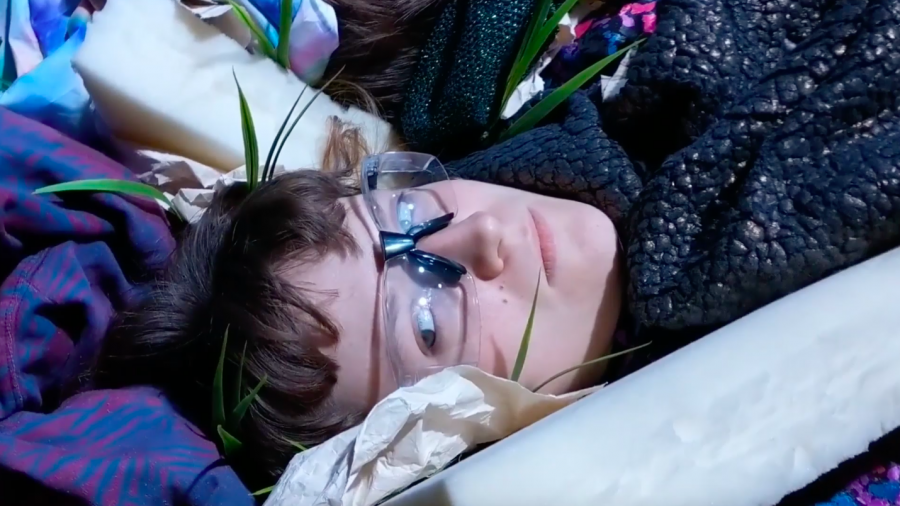 Here, we are all misfits: in our element, yet out of place, adrift amidst the bouncy waves. Don’t be swallowed by the sea of possibilities! We must come together to imagine the city of our dreams. As we hurl our amazing (strange!) bodies and shapes into new rhythms, we find a groove together. Smashing and dancing and pouncing with feeling, through our Will and our Power we’ll carve out a niche for the Earthlings.

Created in collaboration with students from Montréal and Reykjavik, this interactive dance journey for all ages features fantastic wearable sculptures that transform the body to find a playful kinesthetic empathy for all Earthlings: human, plant, fungal, mineral, and mystical. At the heart of this work lie the challenges of body image that begin at a young age. This hybrid workshop-show offers audience members a unique performance experience that encourages autonomy within togetherness to build community through dance. 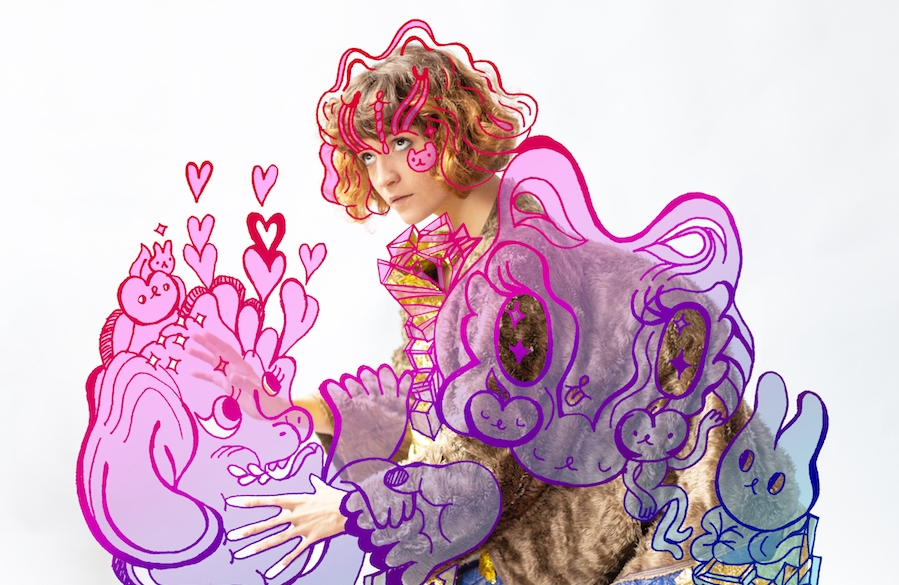 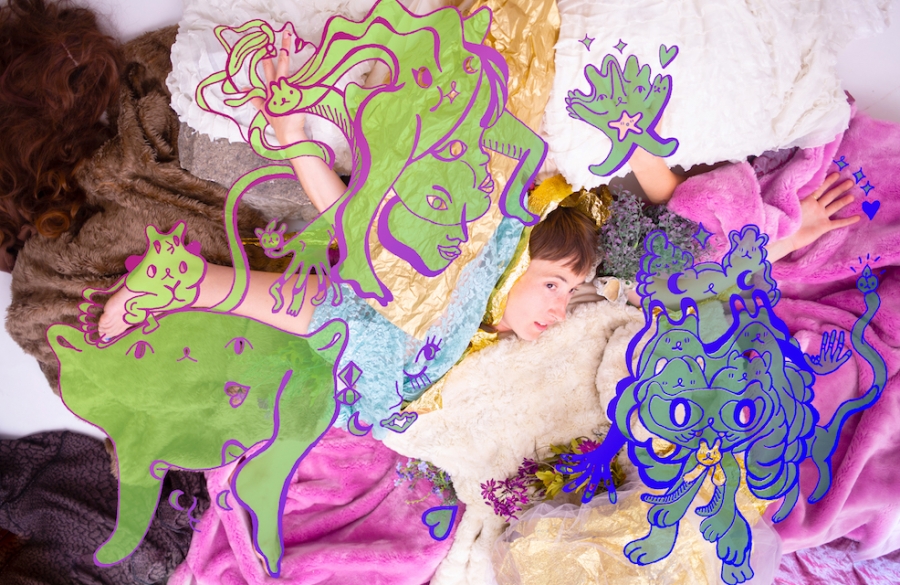 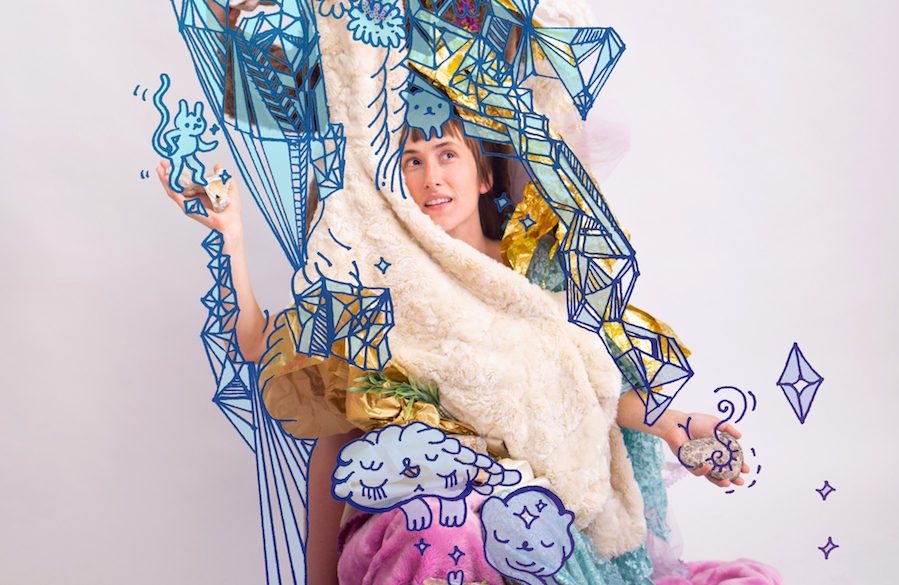 A creation by Nate Yaffe featuring the work of Zuzu Knew

Choreography Nate Yaffe in collaboration with the performers

Choreography created with the collaboration of students from l’école Félix-Leclerc in Pointe-aux-Trembles, l’école des Berges-de-Lachine in Lachine, l’école Atelier in Ahuntsic

Nate Yaffe is a Montréal-based experimental dance, theatre and video artist whose practice aims to uncorrect the self-censored body. the_johnsons 00:11:56, his dance-film examining privacy and surveillance culture was presented at the Cinedans festival in Amsterdam and in film festivals across Canada. The companion interactive video-dance installation the_johnsons 00:21:51 was presented in Montréal at the Darling Foundry, at Eastern Bloc and Monument-National in 2015-16. His most recent work for the stage, Dunno wat u kno (2017), lies at the intersection of the sensitive body and our virtual lived experiences. As a performer, Nate collaborates regularly with Montréal choreographers Katie Ward, Dorian Nuskind-Oder, and Audrée Juteau. He received a Helen Hayes Award nomination for Best Supporting Actor for the role he created in Molly Maxner’s play Occupied Territories (2015), which he reprised in the off-Broadway production in 2017. He is also the creator and curator of the residency series This is actively built, which brings together artists from the queer community into a shared space for collaboration and discussion.

Angie Cheng is a Montréal-based dance artist. Collaborative creation processes ground her ongoing research in performance: investigating the liminal space between the creative process and performance event, and between spectator and performer. The embodied and specific understandings that arise from these investigations shape her current questions and engagements both in her own work and with others. She has a long history of creation with choreographers Nate Yaffe, Tedd Robinson and Thierry Huard, and is currently working with Kate Nankervis, Ame Henderson and James Gnam. She is also currently investigating a solo project as well joining a collaboration with Chi Long and Winnie Ho.

Pénélope Gromko was born in Montréal in 1996. After nine years of playing basketball for the top regional teams of her hometown, Pénélope decided to turn to contemporary dance. She graduated from l’École de danse contemporaine de Montréal in 2018, where her education, particularly under Neil Sochasky, Isabelle Morissette, Marc Boivin, Jamie Wright and Linda Rabin, sparked a fascination with a holistic approach to movement, interpretation, and training. Pénélope has had the chance to collaborate with inspiring artists such as Sophie Corriveau, Lucy M. May, Helen Simard, Manuel Roque, and Mélanie Demers. Parallel to her career as a dancer, Pénélope is an aspiring choreographer. With a growing interest in political issues, she hopes to explore her own artistic practice with an activist approach. She had the chance to present her very first creation, Mes désirs sont désordres, at Tangente as part of Danses Buissonnières Classe 2018.

Originally from Saskatoon, Saskatchewan, Lauren Semeschuk began her training as a Ukrainian dancer. Early on, she toured with Pavlychenko Ukrainian Folklorique Ensemble, which took her across Canada, the United States, and Brazil. After a brief detour into the world of commerce and accounting, she returned to dance, attending Ryerson University, where she received her BFA in 2008. Her professional path has included bouncing around in projects with multiple choreographers and companies, including José Navas/Compagnie Flak, Louise Bédard Danse, Compagnie Marie Chouinard, Human Playground, Nico Archambault, Astrid Lloyd, Dorian Nuskind-Oder and Lucy May. Lauren also is a certified practitioner of the Ilan Lev Method (ILM – Israel).

Jasa Baka (aka Zuzu Knew) is an interdisciplinary artist working between Montréal, Canada and Reykjavik, Iceland. For the last 15 years, she has been making costumes for performers working in various media (dancers, musicians, performance artists, theatre, film). She lives to embellish people and accentuate their notions of self, expanding them into characters of their own surreal folklore. Exploring movement vocabulary through extensions and limitations of costumes and surfacing unimaginable potentials is her passion. Analogue technologies such as overhead projectors and prism effects in camera are also a strong element, bringing a soft, handmade quality to her work. Jasa holds a BFA from Concordia University’s Design for Theater program (2008) and a Diplôme de Patisserie from Le Cordon Bleu Paris (2001). The teachings from both these schools inform her art practice. A list of her best work includes: costumes for Tanya Tagaq and Laakkuluk Williamson Bathory; Québecoise costume and sets for singer Klo Pelgag; costumes and projection design for Koumaria collaborative Residency in Greece; Studio 303 Métamorphose collaboration with contortionist Karianne Hayes; installation and performance “Catt Butt Milkk Barr” for MIX NYC; costumes, projections and design for the band Syngja, Sasha Kleinplatz and The Blond Army; ArtsIceland Residency.