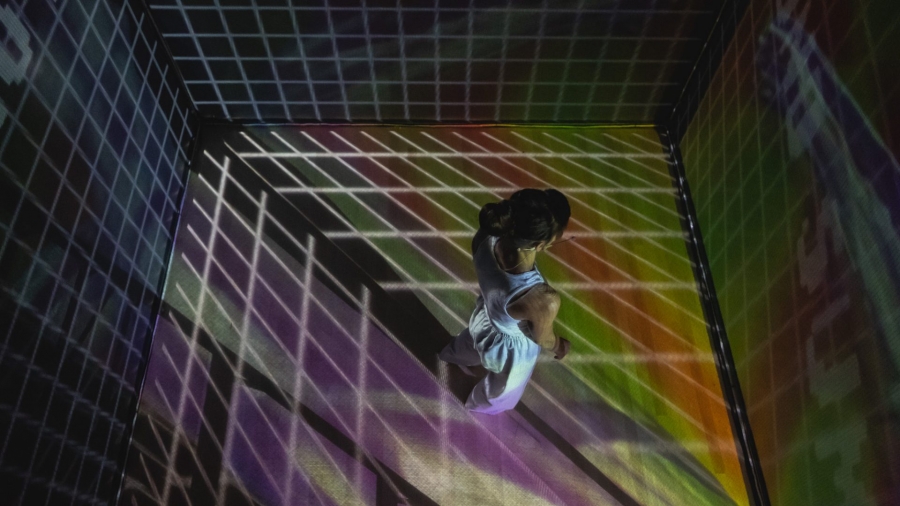 DISCUSSION WITH THE ARTISTS AND BOOK TABLE ON OCT. 12

PARTY WITH DJ GABRIEL REI AFTER THE SHOW ON 13 OCT. 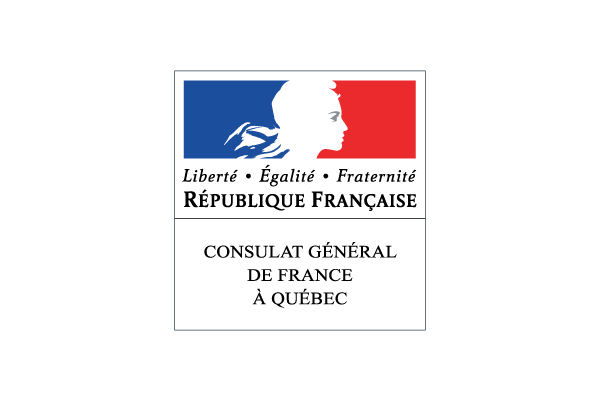 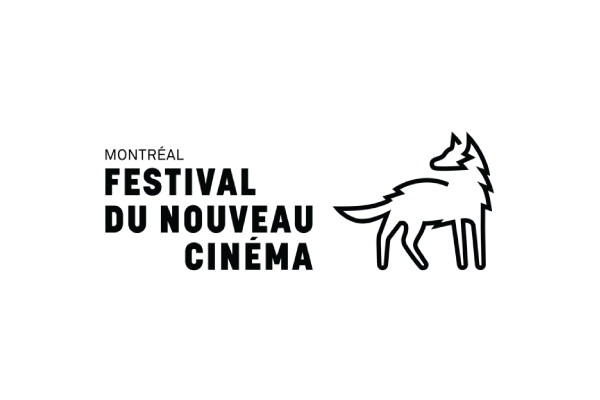 The order of the pieces is subject to change.
1st work - 50 minutes

After Fin de party, the Dans son salon company continues its exploration of partying, this time anchoring itself in the socio-historical context of the summers of love of 1967 and 1988. With the imperative to appeal to funders and presenters, these artists offer a commercial repackaging of revolution. Spectators-consumers surround a white cube saturated with music, projections, words and movement. Within its walls lives a dancer-entrepreneur, a self-identified visionary, striving to create (and sell) a “celebratory experience” in which today’s youth might forge yet another revolution: The Third Summer of Love. 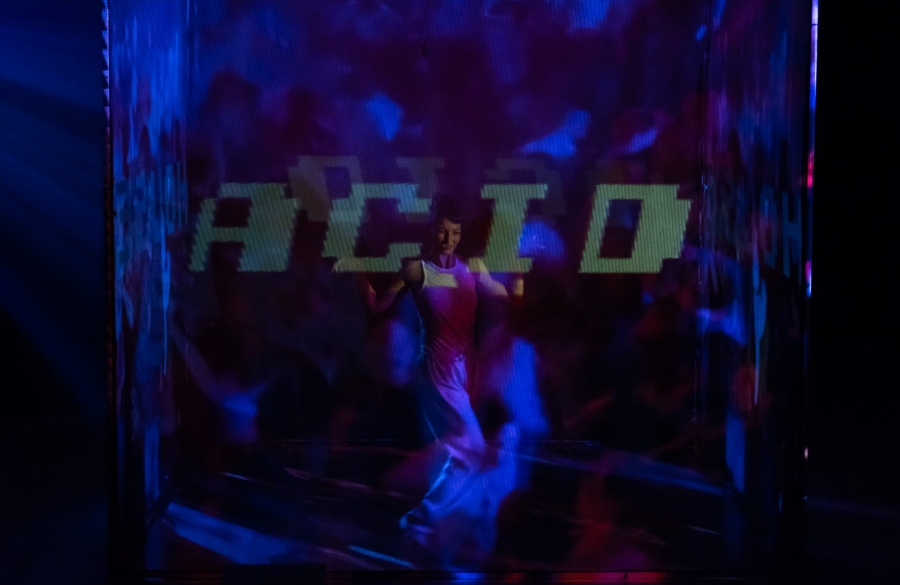 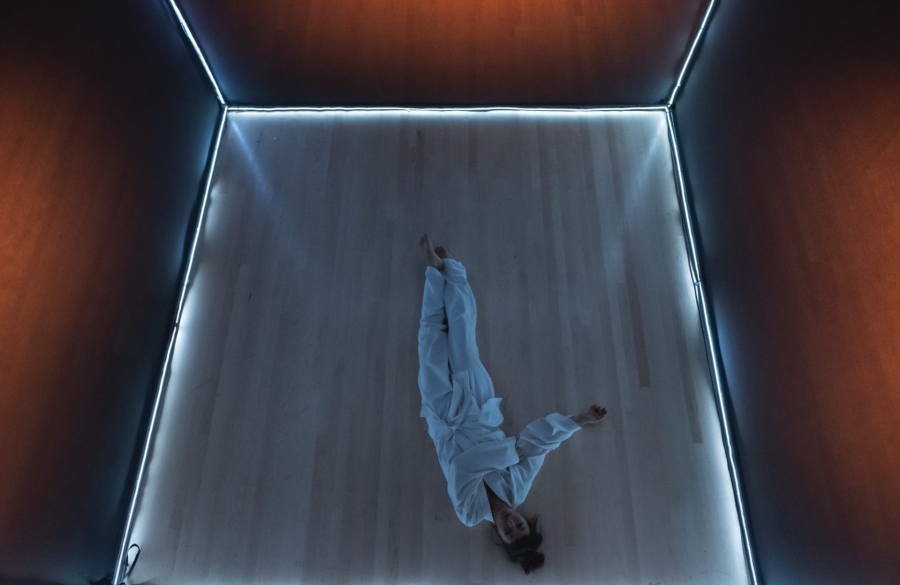 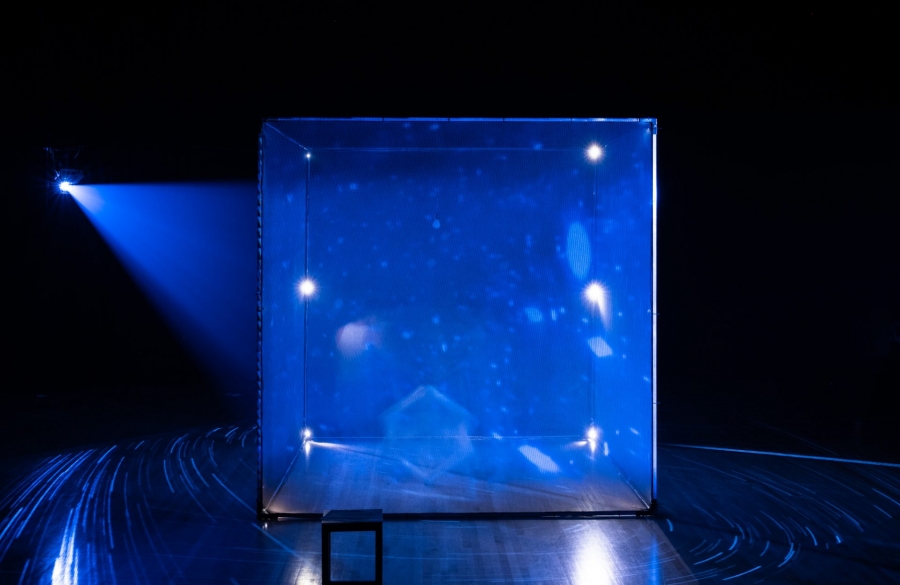 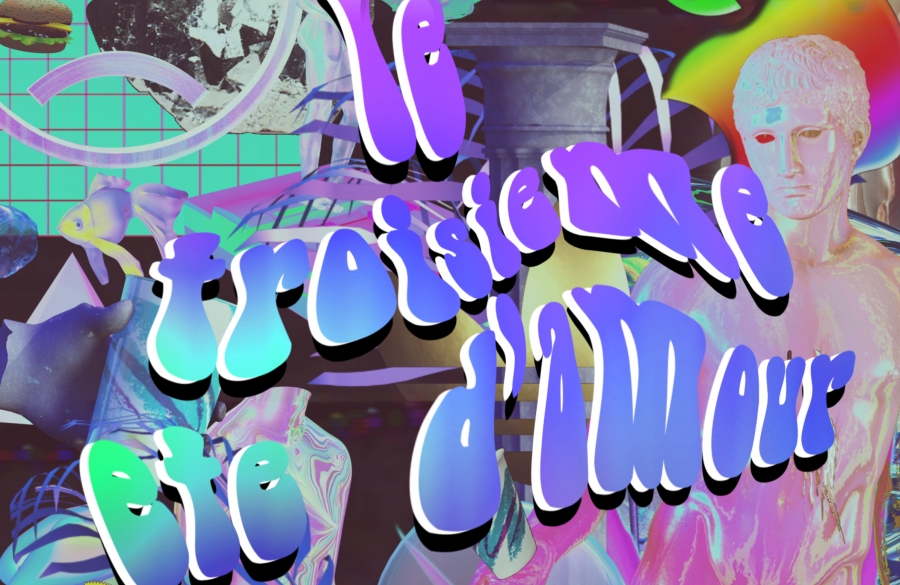 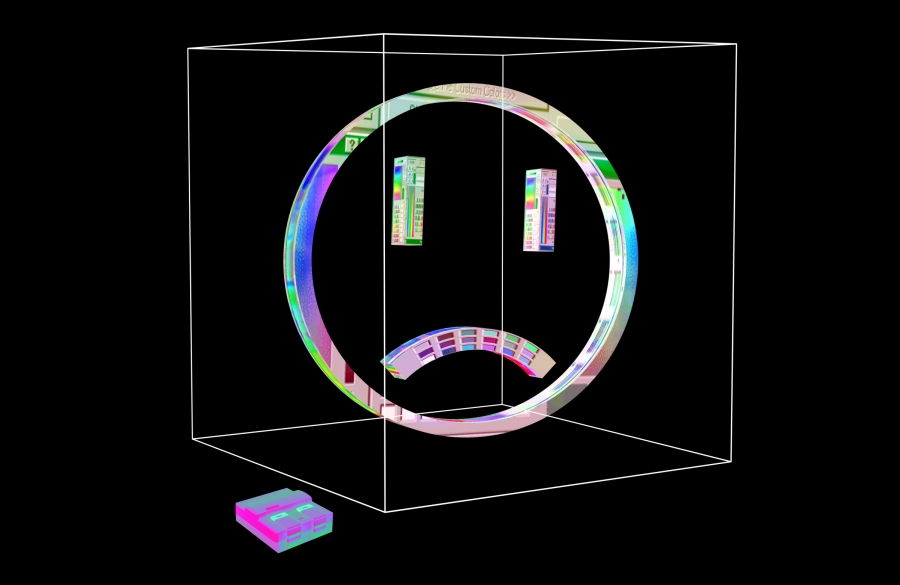 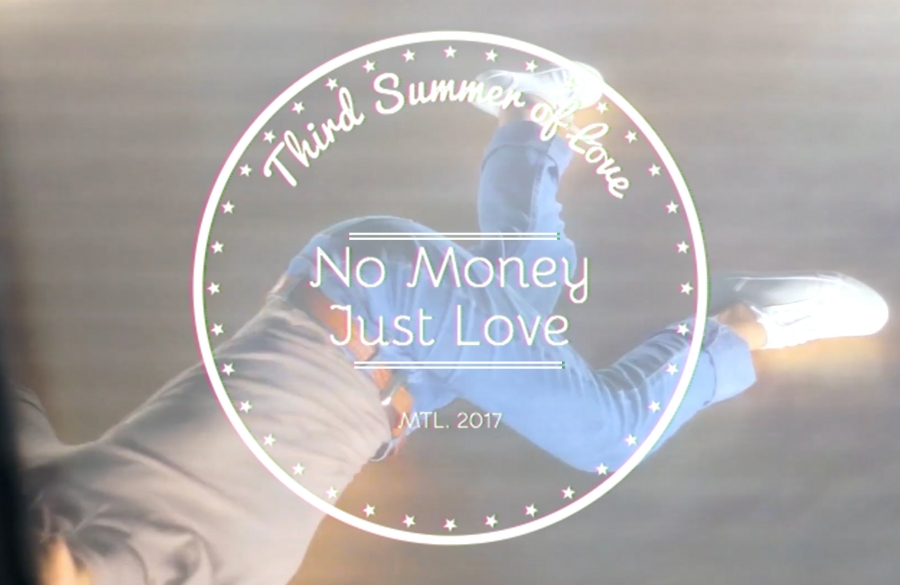 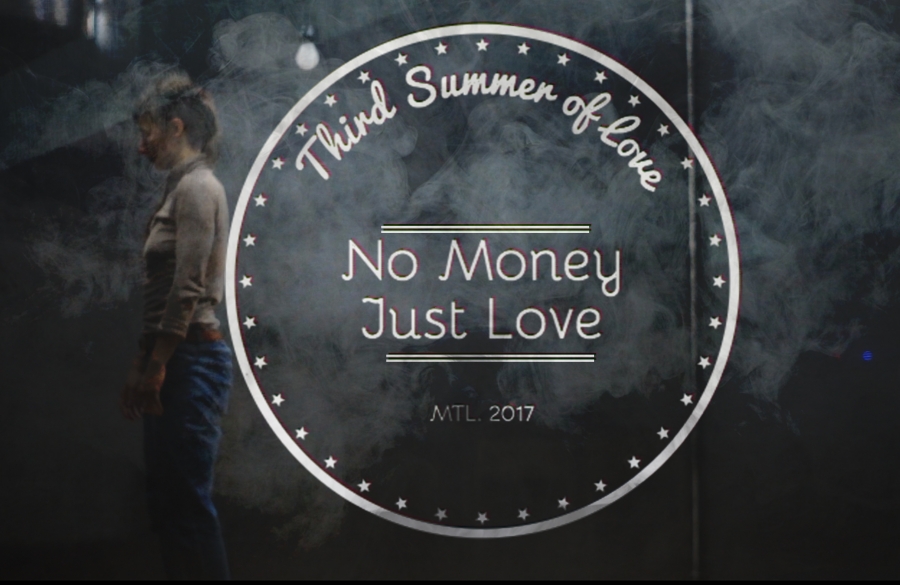 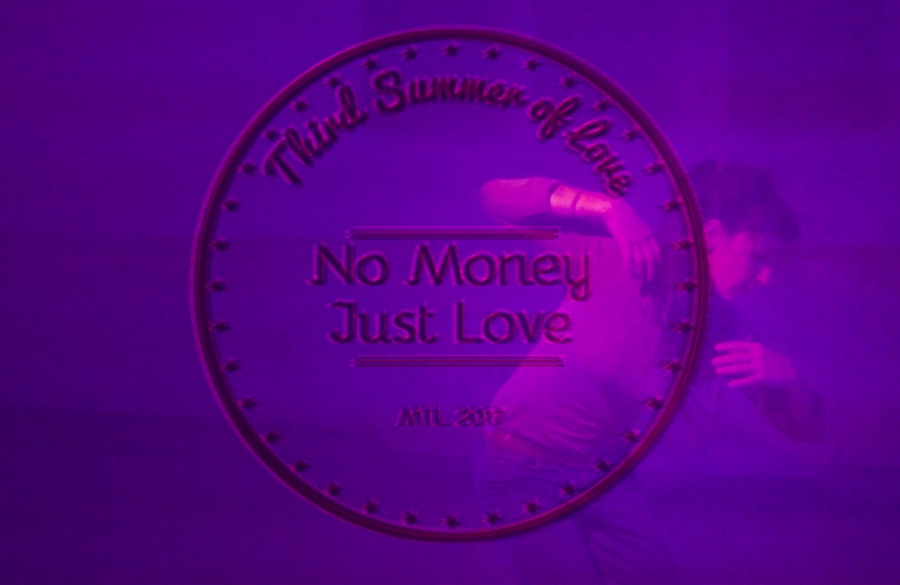 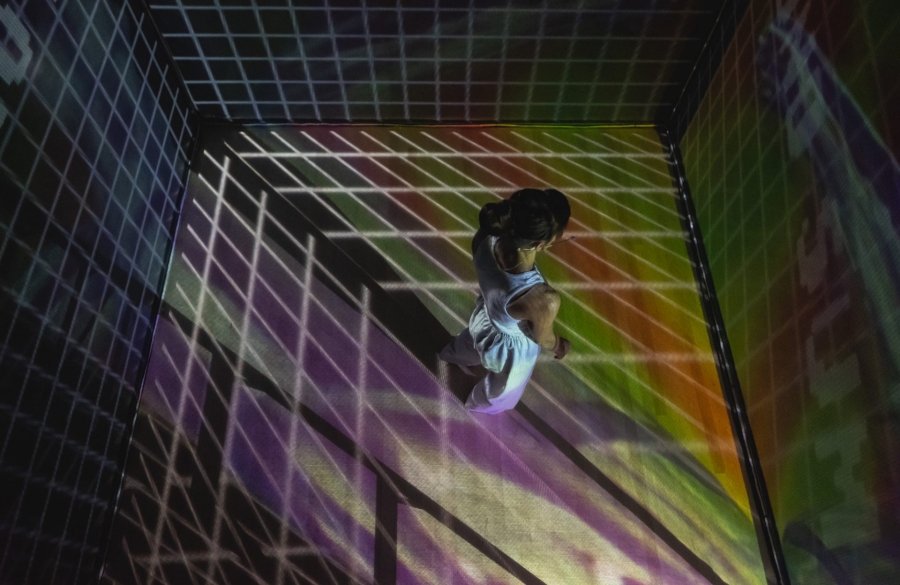 Le Troisième été d’amour (The Third Summer of Love) is a cross-disciplinary performance by Dans son salon. The research for this project has been ongoing for three years. We have explored the issues that affect us, such as the cross-disciplinarity of our proposition and the various ideas that could shape this kind of project. By entering the Troisième été d’amour space, you can see a large cube, right at the centre of the space, around which gravitates light, sound, projections, words, and dance. Why a cube? Iconic in the numeric arts, the cube expresses among other things the desires and inspirations of Marijoe, a solo dancer, but also a business woman and a forward-thinker. What actually shapes the project also inspired one of its central themes: the commodification of art and its repercussion on artistic work. In short, Le Troisième été d’amour voluntarily confuses the audience by mixing reality and fiction and, furthermore, by not taking itself too seriously.

Multidisciplinary artist Benjamin Prescott La Rue specializes in versatility. From doing dramaturgy for dance (Dans son salon) to playwriting (CEAD Price 2014) or sound design for dance, theatre and cinema, the young artist seeks to widen his view on scenic practices. First a bachelor in literature from Université de Montréal, he then works as a composer, while developing his marked interest in designing furniture and objects (DEP woodworking). This past year, he has collaborated with Alexandre Murray, Marie-Reine Kabasha and Christina Paquette, the Opéra de Montréal, Léa Tremblay-Fong and Marie-Ève Groulx.

A bachelor in dance from UQAM and recipient of the William Douglas Prize (2011), Emmalie Ruest meets Karenne Gravel during her studies, with whom she founds Dans son salon. To this day, the company has created two stage shows, two outdoor works and a short dance video. Currently, the company is in the editing process of a short web dance series and in the research stage of a new stage dance video project. Parallel to these activities, Emmalie also works for various choregraphers and artists: Manon Oligny, Peter Trozstmer, Dominique Sirois, Geneviève Jean-Bindley, Stacey Désilier, Sarah-Eve Grant and Helen Simard. She also participates in various shoots and, in 2011, she got to co-choreograph with Karenne for Valaire (Misteur Valaire) for their big concert at the Montréal International Jazz Festival. In 2012, she choreographs Bal moderne for La 2e Porte à Gauche.

Marijoe Foucher graduated from UQAM as a contemporary dancer. Since then, she has taken part in many artistic projects, most notably with Emmanuel Jouthe, Anne-Flore de Rochambeau, Claudia Chan Tak and Philippe Dandonneau. These collaborations gave her the opportunity to perform in several festivals in Québec, Toronto and France. Moreover, to share her strong interest for interdisciplinarity, Marijoe is involved with the company Dans son salon as a performer and rehearsal director, and she participates in short dance film productions.

Since graduating from the National Theatre School of Canada, Julie Basse has designed lighting for numerous theatre productions in Montréal and Ottawa. A loyal collaborator of the company Création dans la Chambre, she has created the lighting for Félix-Antoine Boutin’s plays and mises-en-scène. She also signed the lighting design for many operas, working with stage directors Hugo Bélanger and Oriol Tomas. In music, she works with Alex Nevsky, Jason Bajada, Caroline Savoie, Paupière, La Famille Ouellette and Lisa Leblanc. She collaborates with the dance company La Marche du Crabe since 2014 and with Dans son salon since 2013.

Born and raised in Montréal, Gabriel Rei found his place in the Montréal scene. After years of studying and rehearsing percussions as a teenager, Gabriel slowly discovers the world of House and Techno, where he learns by trial and error how to make people dance with machines. His live sets are generally more ambient and dusty while his DJ sets are more often soulful and suave. You can find Gabriel on the air at n10.as beside Gene Tellem. Otherwise, keep your eyes open to find him in a club and share a night with him.

New media artist Hugues Clément explores the relationship between nature/technologies and sensitive/intelligible perception, aiming to question the definition and the concept of reality within the digital realm. His work, ranging from video and audiovisual performance to mapping and installation, has been showcased in various events around the world, including MUTEK (CA), MUTEK Dubai (AE), Igloofest (CA), Palais des Paris (JP), Transient Festival (FR), MADATAC (ES), Arca Foundation (CO), Files anima + (BR) and Circle of light/Moscow light festival (RU). His work has notably been rewarded with the Bronze medal at the Jeux de la Francophonie 2017 in Abidjan (IC), where he represented the Canada-Québec team.

Karenne Gravel graduates from UQAM’s contemporary dance program with a BA in 2011. She then performs in site-specific events choreographed by Lynda Gaudreault, Katya Montaignac, Ballet de ruelles, and Manon Oligny (Où est Blanche-Neige ?). In 2013, she co-founds Dans son salon with Emmalie Ruest and creates various shows performed on stage, in unusual spaces and on screen. Karenne is currently working on a new solo project, The Extraordinary Ordinary, where she mixes her roles as mother, woman and artist.

Liane Thériault is a dance performer, choreographer, rehearsal director, and video artist. As a performer, she danced for Les Soeurs Schmutt, Anne-Flore de Rochambeau, Julie Lebel, Delphine Véronneau (Tuque et capuche [TeC]), Liliane Moussa, and Claudia Chan Tak, among others. Since 2015, her choreographic work has been presented in Montréal; first, as a solo, (Personne(une), Somebody), then within a creative duet (Mine de rien: un collectif). Since 2013, she is part of Dans son salon, first as a video artist, and then as a rehearsal director. As a video artist, she also worked with La 2e porte à gauche, Helen Simard, and Karenne Gravel.

Eve (dance is an unplaceable place)

Eve watches us as we enter the room. She looks calm, but something about her is unsettling. For this primordial ritual, she is surrounded by three duets: spectator-participants sporting Oculus headsets and their dancer-partners. In this Embodied Virtual Reality performance, a participatory dialogue is created among real and virtual dancers through touch and smell. VR experiencers are transported to unexpected geographies within 3600 dance films, made visible via 2D projections to onlookers sitting around the room. How might it feel to slip into the skin of someone you have never met? 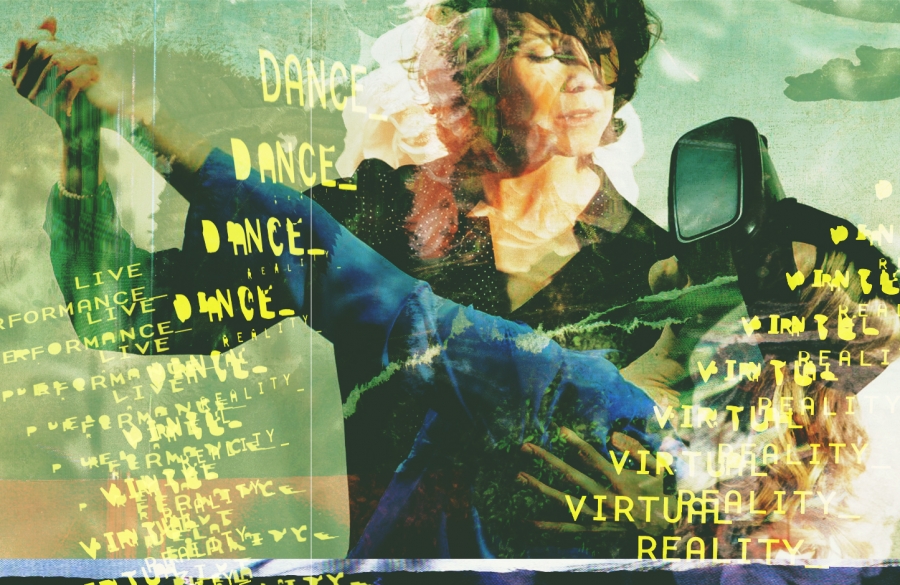 Eve (dance is an unplaceable place) is a mixed-media project based on three Embodied Virtual Reality experiences and a live dance performance.

Eve is in the middle of the room sitting on a chair, dressed very neatly, like a girl you trust. But she looks at a fixed point in front of her and conveys something disturbing. It’s as if she knew everything. As soon as we enter the room, she looks at us.

Born in Padua, Italy, Margherita Bergamo (alias Telma Ha) is a contemporary dancer since 2000, after transitioning from a career in the Italian Rhythmic Gymnastics Team. She studied at the University Ca Foscari in Venice and at the Institute of Theater in Barcelona. She worked with Erre que Erre, Sol Picó, Toni Mira, La Veronal, Marcel·lí Antúnez, Carles Congost, Allora & Calzadilla, and in 2010 she co-founded the company Les filles Föllen. She recently directed the show Revisiting Bowie, produced for the Auditorium of Barcelona, and regularly creates choreography for music videos, video art & commercials, while cultivating her teaching skills. She has started to work in VR with Muvers and Omnipresenz. In 2017 she founded Compagnie Voix.

Daniel González is a digital artist born in Colombia and based in Barcelona. He considers himself an electronic art explorer and interaction design creative, with a special interest in empathy research, extended reality, embodiment, telepresence and social innovation. He received, among other awards, an honorary mention in Prix Ars Electronica 2014 & 2017 (Linz, Austria) along with the non-profit association BeAnotherLab, creators of The Machine to Be Another, an EVR system that uses body ownership illusions, performance art and virtual reality to understand the relationship between identity and empathy from an embodied perspective. Daniel is also founder of Omnipresenz, a creative XR studio based in Barcelona focused on embodied virtual reality, telepresence and immersive storytelling.