DISCUSSION WITH THE ARTISTS AND BOOK TABLE ON NOV. 9

The order of the pieces is subject to change.
1st work - 60 minutes

Two solos, two hemispheres. At times vulnerable, sometimes strong, two women vacillate between authenticity and multiple layers of social construction. Their presence is rooted in magnetism, vibrations, automatic reflexes, interferences, and the tuning of oneself with the other. As they stand on the edge, the same mythical ocean that stands between them unites them. 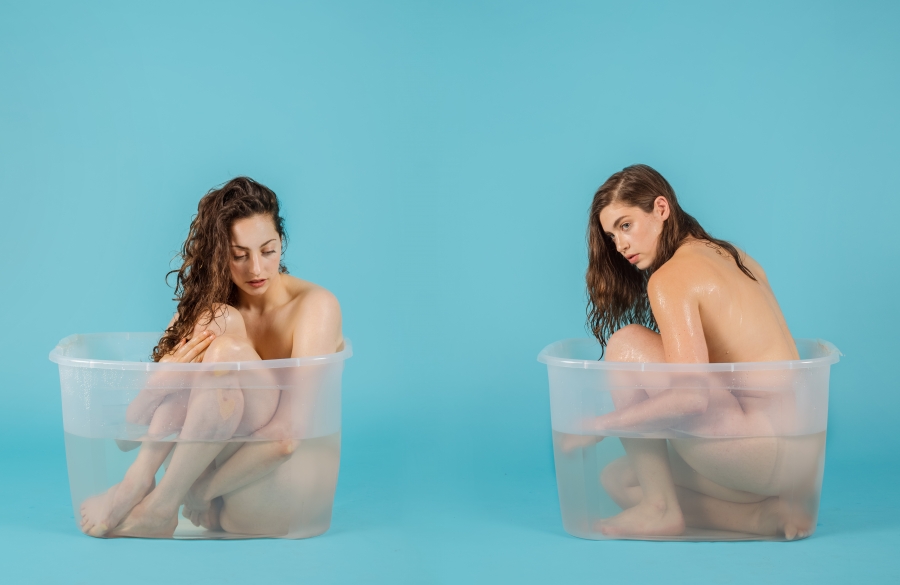 Marilyn Daoust is an UQAM graduate in dance performance (Interprétation de la danse, 2011) who has received two CCA scholarships to hone her skills in Catalonia and Austria, and has also trained in Chile and Belgium. Both here and abroad, she moves in the orbits of Manon Oligny, Louise Bédard, Daina Ashbee, Martin Messier, Lucie Grégoire, Les Soeurs Schmutt, Liliane Moussa and Delphine Véronneau. Marilyn also served as spokesperson for the 2017 Accès Dance Festival. In the field of theatre, she was part of the movement of plays directed by Benoit Vermeulen (Assoiffés, by Wajdi Mouawad) and Florent Siaud (Toccate et Fugue by Étienne Lepage and Nina, c’est autre chose by Michel Vinaver, to name a few). She choreographed and was also cast in Angela Konrad’s play Last night I dreamt that somebody loved me (Usine C, 2017). Marilyn Daoust co-founded For Fauve with Laurie‑Anne Langis, with the support of the CCA and CALQ. Currently, Marilyn’s insights into the creative process are indisciplinary, so that the work to be born can reveal its maximum expressive potential.

Upon graduating from EDCM in 2012, Laurie‑Anne Langis collaborated with various established and emerging artists, including Sasha Ivanochko, Marie Béland, Lucie Grégoire, Bettina Hoffmann, Manon Oligny, Audrey‑Anne Bouchard, Ricardo Dal Fara, Louis‑Elyan Martin, Hugo Dalphond, Sarah Manya, and Lucy‑May Constantini. In recent years, she has appeared in Montreal and abroad in the solo performance Id Double, choreographed by Louis‑Elyan Martin. She also co-founded For Fauve with her accomplice Marilyn Daoust, and the Éclipse Collective with Audrey‑Anne Bouchard and Laurence Gagnon. Laurie‑Anne then worked on multidisciplinary creations highlighting her societal concerns and her own physical and interpretive research. Through her collaborations, she tries to push the limits of conventional performance. In addition, since 2012, Laurie-Anne has extensively explored her fascination for meditation and presence work by training abroad in martial arts (Tai Chi and Kalarippayattu) and dance-theatre.

Mula means going deep in Maliseet. Ivanie’s flesh is inhabited by a recurring dream that haunted her youth. With the intensity of a loud, howling cry, a male voice would speak out of the darkness: “You will never go away.” This powerful memory keeps her grounded, guiding her towards her Maliseet roots, dance, integrity and truth. On this journey that is akin to a dream yet grounded in reality, the eagle’s piercing eyes find the pathway and the bear is the nurturing mother. From within Ivanie’s body, something fights fiercely to break through to light: the butterfly must crack open her cocoon.

I keep having the same dream… This man’s voice never screams, but it has the intensity of a howling, loud scream. It is stressfully slow and really calm, and it resists losing control.

This dream takes place in the dark; it is empty and full at the same time. In that space, this voice keeps telling me: “You will never go away.” It scares me but I have to stay calm and listen to it. It prevents me from going fast; I really have to open my senses to find my way towards a light.

To this day, the memory of this voice sustains me. It keeps me grounded, and I believe it is my ancestors who are speaking to me, as if they don’t want me to forget who I really am.

I promise I won’t forget, because you are still here to remind me.

Upon graduating from École de danse contemporaine de Montréal in 2014, Ivanie Aubin-Malo met her mentor, Curtis Joe Miller, who transmitted the Fancy Shawl Dance to her. Honouring her Malisseet roots, Ivanie dances and breaches subjects relating to her Indigenous identity. She collaborates with multiple talented artists, such as Marie Belzil from Moment Factory, Tanya Lukin Linklater, DJ KXO, Buffalo Hat Singers, Moe Clark, Barbara Diabo, Alex-Ann Boucher, Soleil Launière, and Alexandre Morin. Since 2016, she has performed in and choreographed two shows: Ktahkomiq by Ondinnok, and Mito-Jogos de recusa by Marcos Nery, presented at the SESC festival in Brazil. Ivanie transmits her passion by teaching dance to young people while educating them on Indigenous culture.

Originally from Mashteuiatsh in Lac-St-Jean, Soleil Launière is a body & voice multidisciplinary artist based in Montréal, with a pronounced interest for world chants, sound, vocal improvisation, physical interpretation, and theatre. Her experience includes many years of musical and artistic discoveries from different countries and cultures, studies in Sound Design at the Trebas Institute, a DEC in Voice Studies, a yoga teacher certificate, as well as many experiences in performance art at various festivals and events. All of this tinted with her Indigenous heritage.