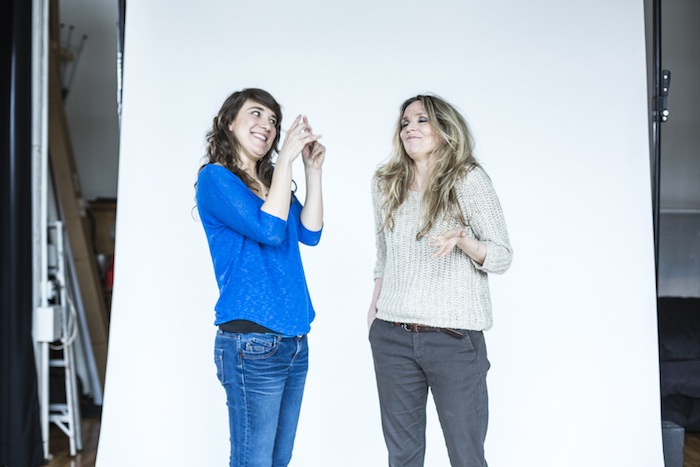 Révélations + The weather in Times Square 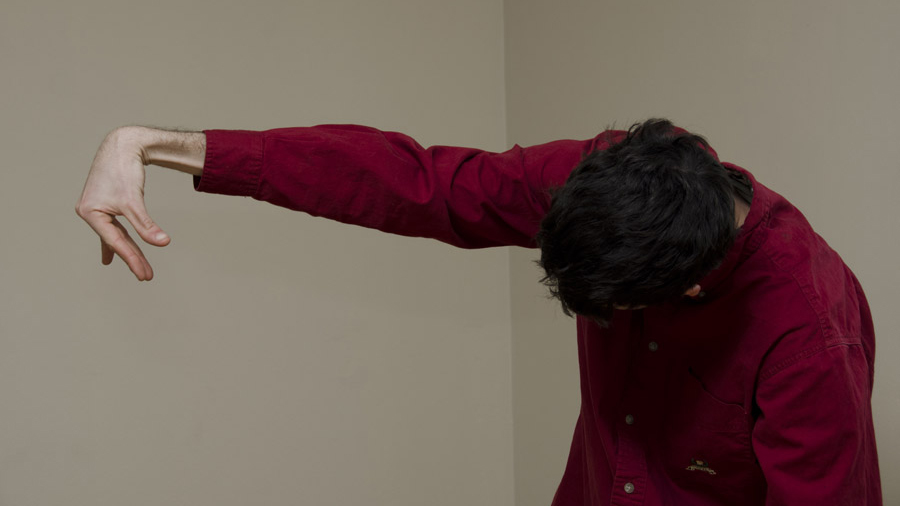 With her characteristic touch of irony and spirited gestural style, Marie Béland posits her research question about the nature of theatrical representation. She examines here the noble, yet pathetic, struggle of the solo dancer to attain “authenticity”. And so it is that a new creative cycle has begun, called The mystical in art. 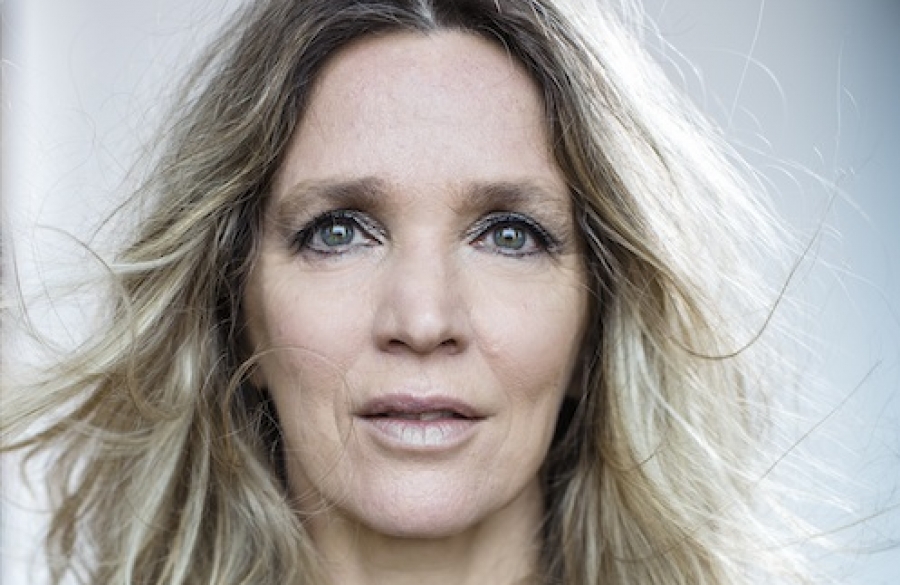 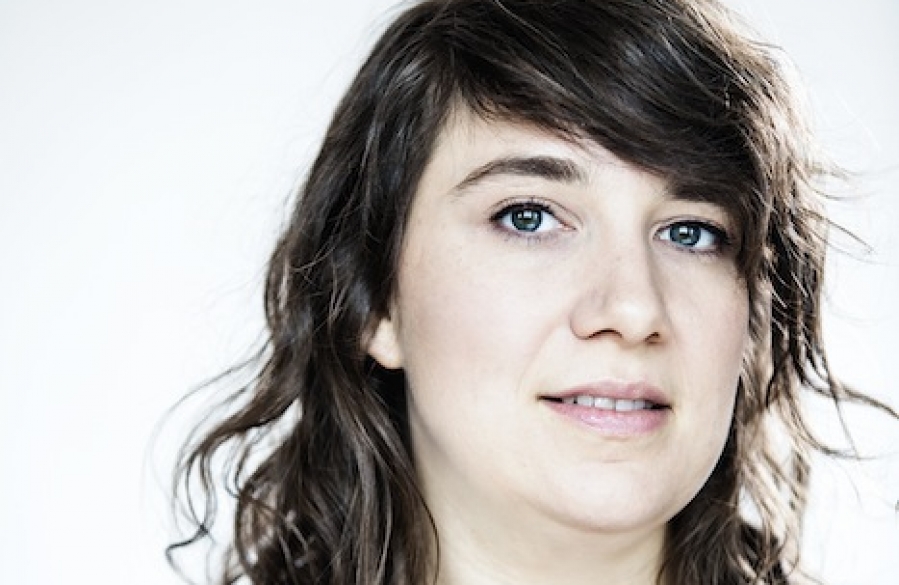 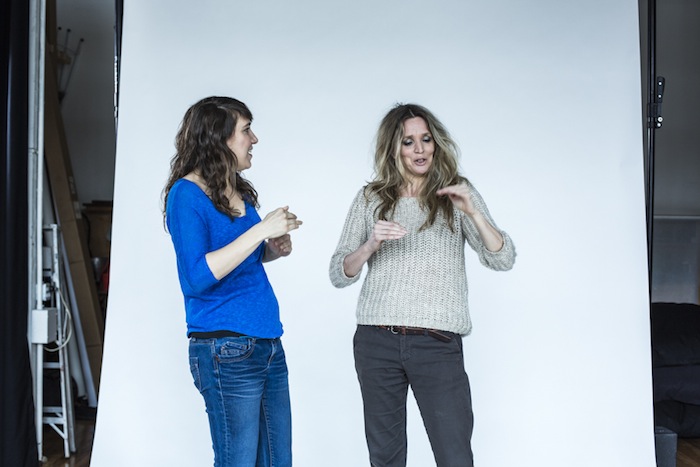 Marie Béland
Marie Béland is a dance artist based in Montreal, Canada. She graduated from the University of Québec in Montreal (UQAM), where she received the William Douglas Award of Excellence as a student in dance creation. In 2005, she founded her company, maribé – sors de ce corps and created maribé – live in Montréal during a summer residency at Studio 303, and then Twis-manivelle, declared one of the top 5 dance performances of 2005 by ICI magazine. Then comes Dieu ne t’a pas créé juste pour danser, presented at Tangente in October 2008 and toured in the Maisons de la Culture de Montréal (a system of neighbourhood theatres) thanks to the Montreal Arts Council, RAYON X : a true decoy story, co-presented by Tangente and the Festival Les Coups de Théâtre, BEHIND : une danse dont vous êtes le héros, which has been performed again at the Festival TransAmériques in 2011 and at the Festival ArtDanThé (FR) in 2012, Vie et mort de l’élégance (2012), which won a silver medal at the Jeux de la Francophonie (FR) in September 2013, Révélations, presented in the Festival GREC (ES), and finally BLEU – VERT – ROUGE (2013), presented last winter at l’Agora de la danse. In 2010, Marie left for a two-month residency at the Berlin’s TanzWerkstatt.

Parallel to her work on stage, Marie Béland is interested in site-specific performance, multidisciplinary work and teaching. In 2008, she was commissioned by the Théâtre de Verdure to create Les Précédents, an architectural choreography presented more than 40 times since its creation. She also is a founding member of La 2e Porte à Gauche, an organization that creates and produces contemporary dance events which take place outside of traditional dance venues, in places such as apartments, stores, bars, parks, and which aim to question different relationships between artists and their audiences. Most notably, L2PAG has produced: Te situes-tu dans l’in situ ?, projet Vitrines, The Art (pronounced dehors), 7 ½ à part., and Blind Date : un rendez-vous chorégraphique, 4quART, Danse à 10, and his coming forward with a new project presented in hotel rooms for January 2014. In 2009, she also founded the collective Le P.I.Q.U.A.N.T. (Le Projet Indisciplinaire Québécois Utilisant les Arts Nécessaires à son Travail) with two musician colleagues. Their first collaboration won the award for the “Best Francophone Show of the Year” at the Fringe Festival 2009. In 2011 it will be presented again at the USINE C in Montreal.

In ten years, Marie Béland has created a series of shows where indiscipline reigns with precision and verve. Through the entirety of her work, Marie choreographer Marie Béland asks questions about dance, performance in general, and dance presentations, showing us their inner workings and sometimes their flaws. The works, at first glance nonchalant, are the starting point for a deep reflection on human nature and social mores. Her movement vocabulary draws together physical energy, absurd humour, pop culture, and audience involvement, in a juxtaposition of the senses that is as surprising as it is joyful. Want to know more? Please visit www.maribe.ca or www.la2eporteagauche.ca. Company maribé – sors de ce corps is a member of Circuit-Est Choreographic Center and is administrated by Claire Piétin, Diagramme Gestion culturelle.

maribé – sors de ce corps
Since the creation in 2005 of the company maribé – sors de ce corps, it has produced a series of unique works, where indiscipline reigns with precision and verve. The works, at first glance nonchalant, are the starting point for a deep reflection on human nature and social mores: choreographer Marie Béland asks questions about dance, performance in general, and dance presentations, showing us their inner workings and sometimes their flaws. Her movement vocabulary draws together physical energy, absurd humor, pop culture, and audience involvement, in a juxtaposition of the senses that is as surprising as it is joyful.

Annik Hamel
For 28 years, Annik Hamel’s artistic achievements have been nourished by more than fifty encounters with creators from Montreal and beyond, the majority as a member of Montréal Danse, which she joined in 1987, while still others occurred in her work as an explorer with other organizations or as a soloist. Among these artists: Jean-Pierre Perreault, Paul-André Fortier, Daniel Léveillé, Ginette Laurin, Natsu Nakajima (Japon), Françoise Sullivan, Suzan Marshall (ÉU), James Kudelka, Karine Pontiès (Belgique), Ae Soon Ahn (Corée), Danièle Desnoyers, José Navas, Estelle Clareton and Martin Bélanger. As a member of Montréal Danse, she is currently working with choreographers Jean-Sébastien Lourdais and Benoît Lachambre. She also has a marked interest for acting and theatricality, which has regularly led her to engage with theater and cinema. She has worked with Wajdi Mouawad, Denis Marleau (Cie Ubu, Hamlet and Intérieur), Gilles Noël (Erreur sur la personne), Jean Chabot (Mack Sennett), Mario Côté (Les saisons Sullivan), Raymond St-Jean (Haendel), Mario Calvé (Sur la ligne). For a few years, she has been part of DOJO from Pol Pelletier.

The weather in Times Square

How to dance the weather? This impossible task brings us to the limits of representation and to the infinite capacity of the dancing body to hold abstraction. In The Weather In Times Square, five dancers access the rhythms, relations, and movements of the weather. They are a rolling cloud slowly traversing the sky; they are the rain pattering on the roof. Their paradoxical attempt to dance the weather transforms them into a non-human group, a slowly moving sculpture. And yet, they insist on language as a tool to describe and to challenge the weather. Abstraction is transformed into words and words are exchanged. Eventually we see the weather as a way of looking, a way of feeling, an encounter with the other—something beyond us, continuously undoing us. As we converse, as we come together in the theatre, as we move through life, we are moving with, and as, the weather. 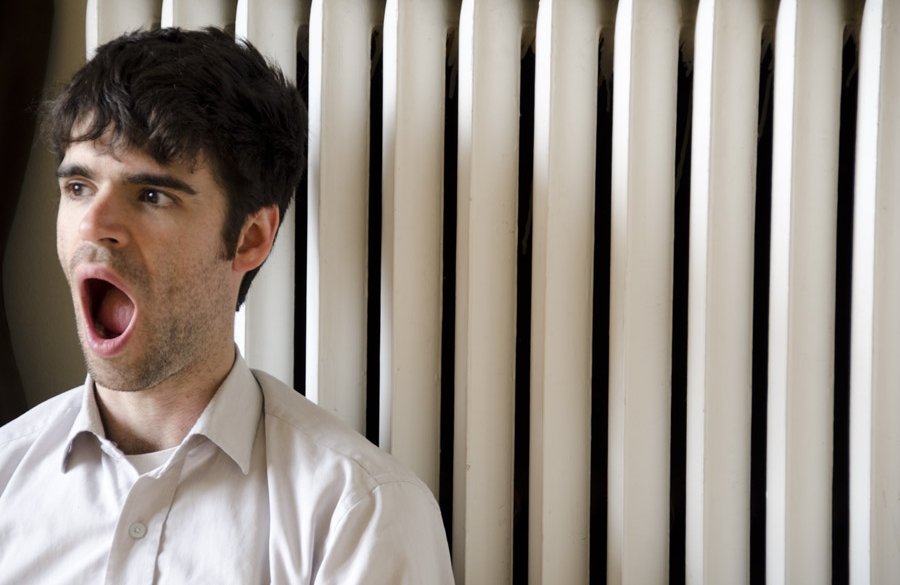 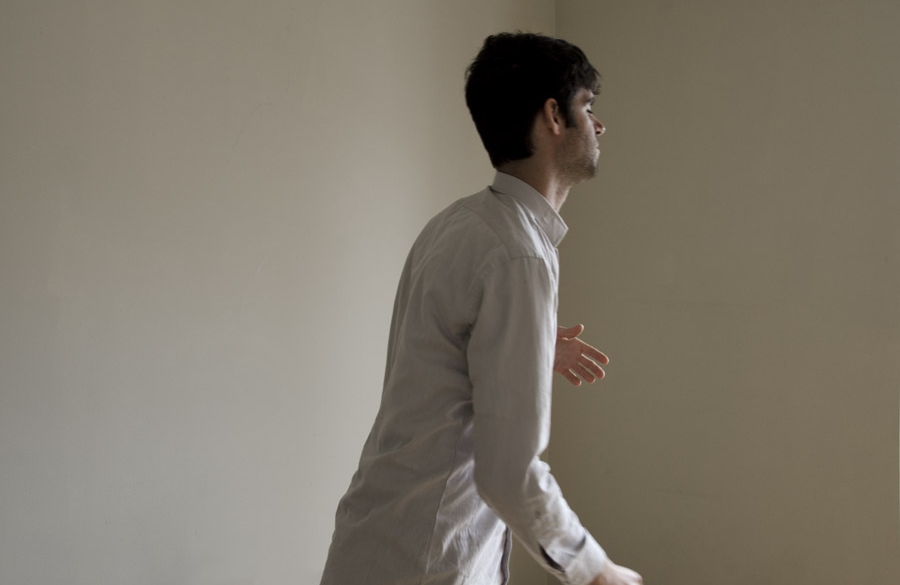 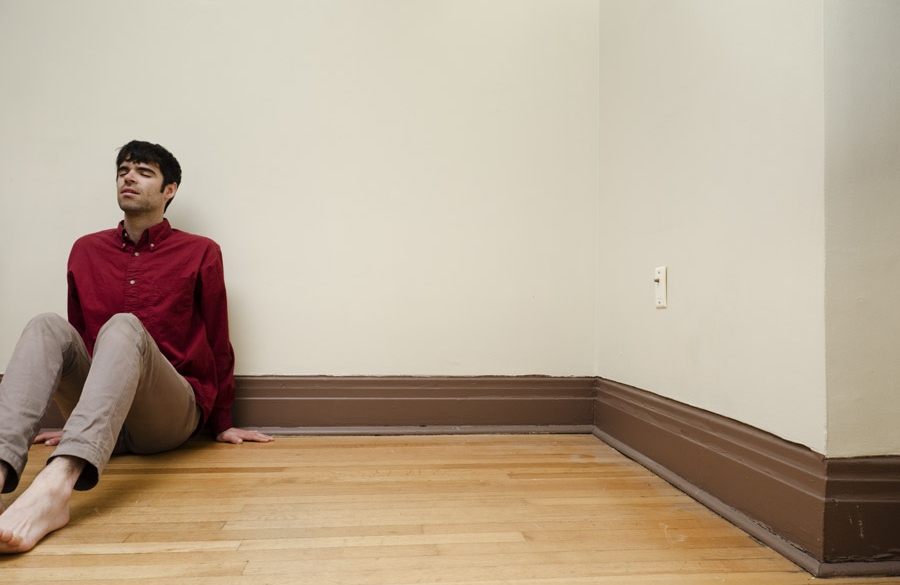 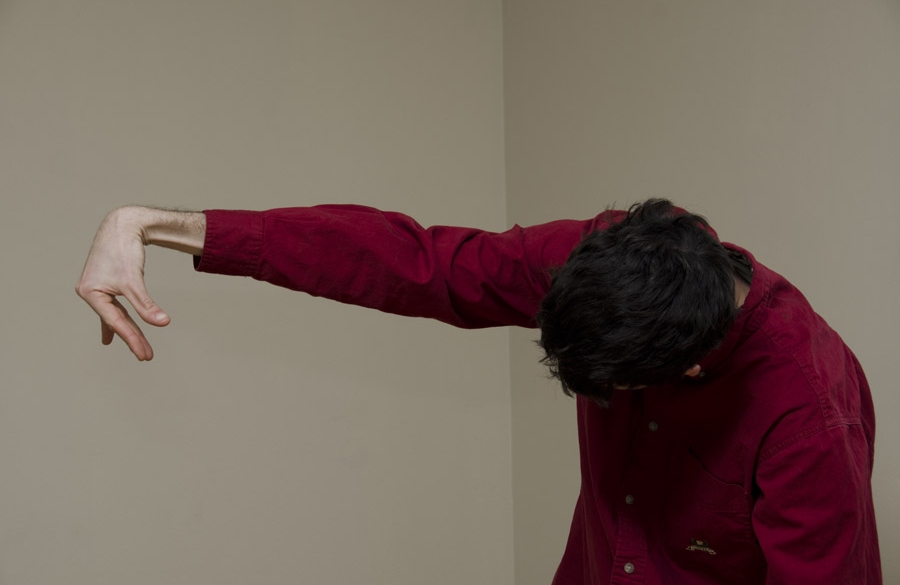 We discuss that based on the idea of not-knowing we will now work with the weather. The weather as something that is both continuous and event, both chaotic and static. A system of movement and relations, predictable but unknowable: a way of enacting not-knowing.

K mentions the doldrums. A place where sailors would get stuck because there is no wind.

Weather: the dynamic relation of everything.

A: how was it for you yesterday?

K: it seems elementary and dear. A question comes up of how much sophistication we need.

J brings up a conversation with Grand Magasin about how to not over-rehearse. Keep some mistakes.

K brings up the notion of transformation and mutation in regards to the weather. Over the course of a year and over the course of a day. At the heart of weather is change. Temperature. But also this connection to light, the sun, the planets.

D: but maybe not-knowing is really the co-existence of multiple knowledges.

J: suspending knowledge – this is what happens in improvisation.

A reads from Sex, or the Unbearable. What is sex? Lee Edelman’s response: “For me it has something to do with experiencing corporeally, and in the orbit of the libidinal, the shock of discontinuity and the encounter with nonknowledge.”

Discussion follows about whether the weather could be related, in that it is a corporeal encounter with nonknowledge. But rather than a shock, the weather is generalized and continuous.

D: It can also shock.

We begin with a conversation about the difference between prediction and knowledge.

K: Knowledge is the demystification of the past. Prediction is based on knowledge but is not knowledge.

D informs us of the origins of the phrase negative capability. From John Keats, in a letter to his brother. Something like: an artist’s duty is to exist in uncertainty—to acclimate to uncertainty.

D wonders how much the piece should be self-aware. How much is it about dance?

J thinks that the scores themselves can afford to be very quiet sometimes.

A: It sounds like it’s raining in times square.

K: Why is it called Times Square?

Informs us that weather has no interiority. It’s pure affect. In the 19th century they called it a machine of heat, water and steam. Weather is pure abstraction. Dance is also pure abstraction. Weather is mundane. [JW called the weather “short-hand for embodied experience.”] People have to talk about it in a mundane way, similar to how we have no vocabulary for dance. Dance as an experience of the body itself.

N reads from Massumi: To dance a storm.

We need to think about time.

J clarifies: we need to think about the time between what we do and the effect it has.

N: It’s best when it’s super vulnerable. Laughing is also good. It’s like the weather. Also 4 is a difficult number. 3 and 5 are better.

A: There will be five! S is coming. There is also a problem of leading / following.

“I take Lauren’s point to heart, after all, when she says that subjects are not generally shocked by the experience of their own incoherence and what matters most may not, in fact, be blockages or encounters with nonknowledge but the multiplication and overlap of incompatible knowledges. But the persistence of that incompatibility, the constant obtrusion of what our will to relational management ignores, denies, or misrecognizes, makes undoing as such the condition of living in a world that is not our own.”

We discuss the last sentence.

A is convinced that the weather slowly and persistently undoes us.

Adam Kinner
Adam Kinner is an artist based in Montreal who works in dance, music and performance. His work finds embodiment in both the capacity of the stage to become a site of real social engagement and the capacity of the everyday to be imbued with a performance sensibility. Originally trained in music, Kinner began making choreographies as an attempt to reframe the musical performer. Caught between the logic of the music performance and that of the dance performance, Kinner now straddles both in order to examine their contingent claims to truth. His choreographic work has been shown at Tangente, Usine C, and OFFTA in Montreal. As a musician, he continues to perform around North America and Europe.