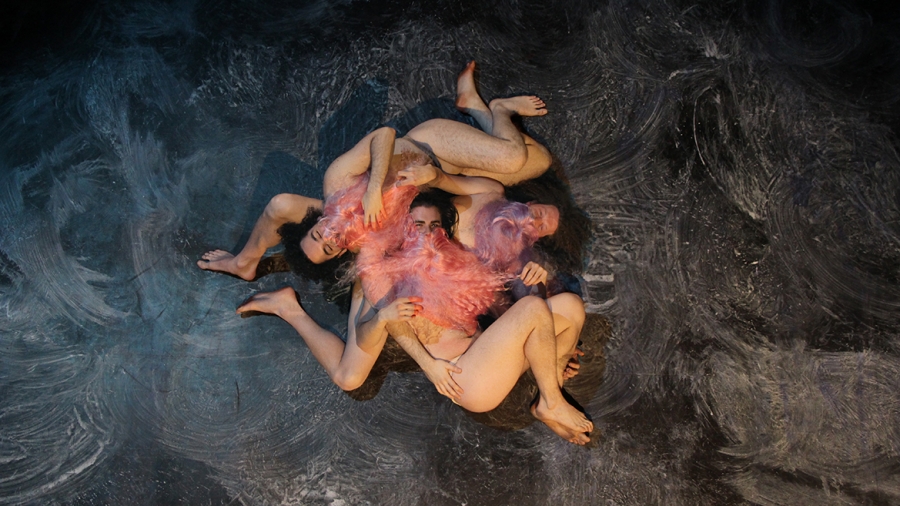 DISCUSSION WITH THE ARTISTS ON OCT. 25

In this solo, Marie takes hold of Michael Jackson’s world to fuel her own work, paying particular attention to his hybrid practice as a musician-dancer with an extravagant stage presence. In a lunar landscape shaped by sound, she transforms into a moving creature, revealing the singer’s potential for metamorphosis. The duplicity of his character, lying somewhere between icon and monstrosity, brings her to navigate her own complexity. This artistic composition is dreamy and a little bit rock, at once intimate and striking. 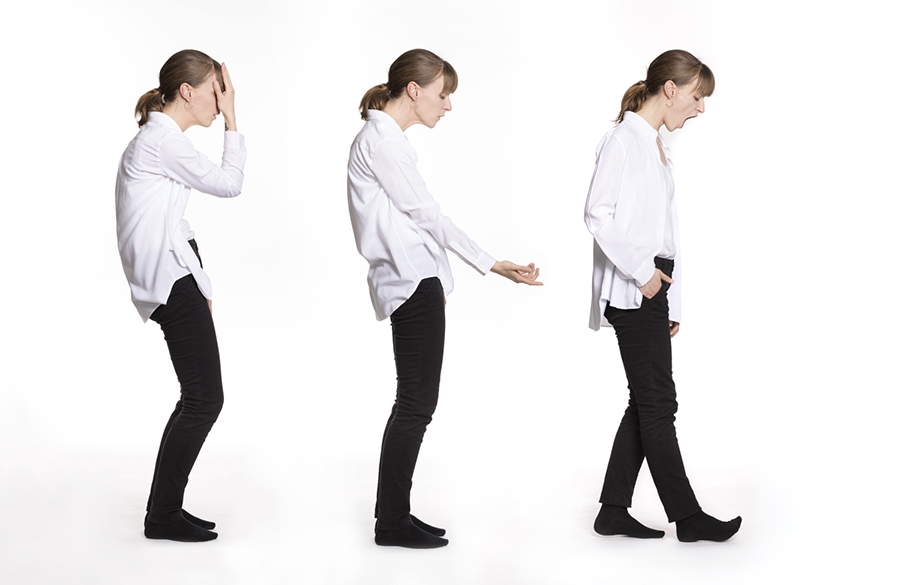 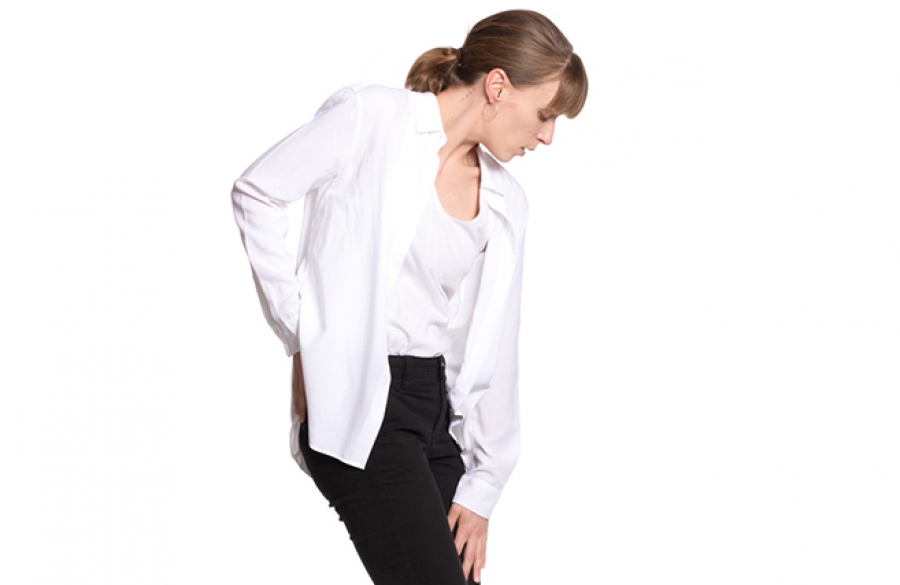 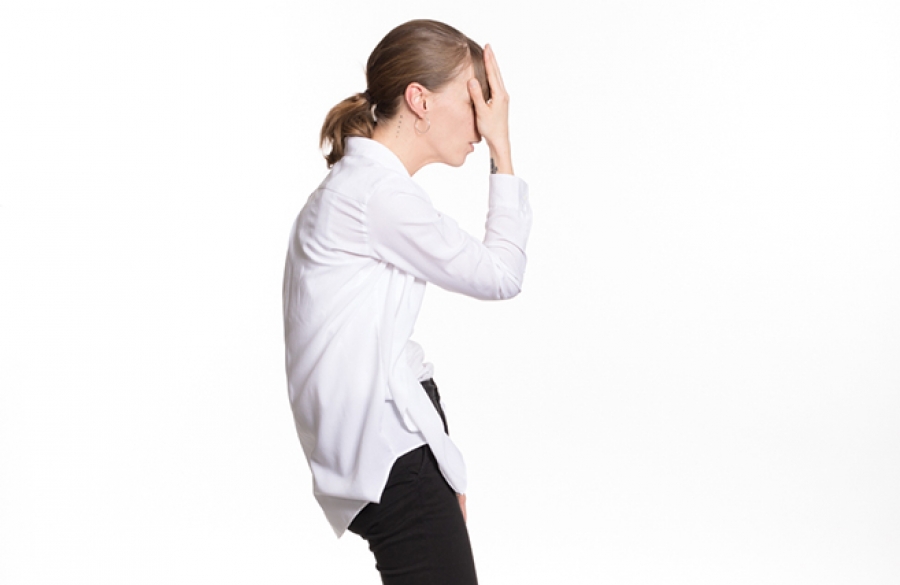 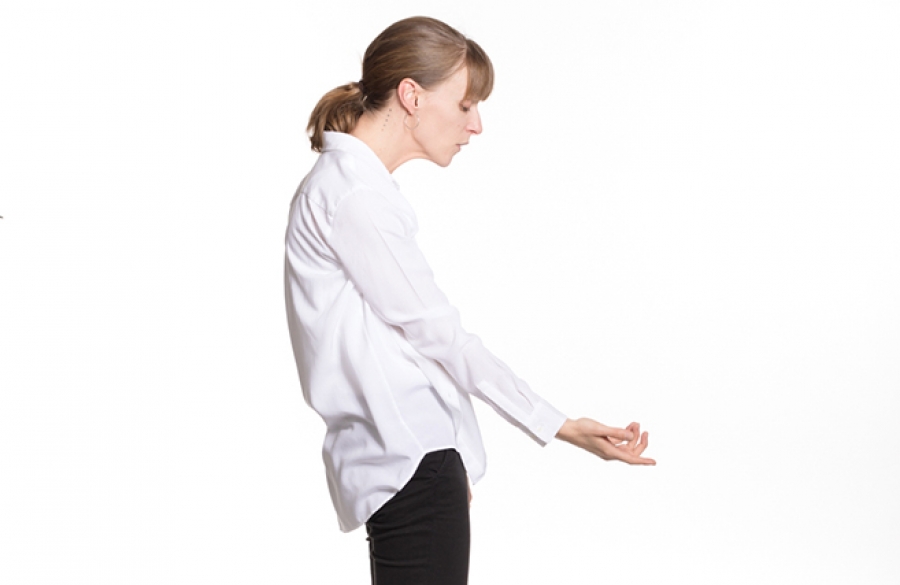 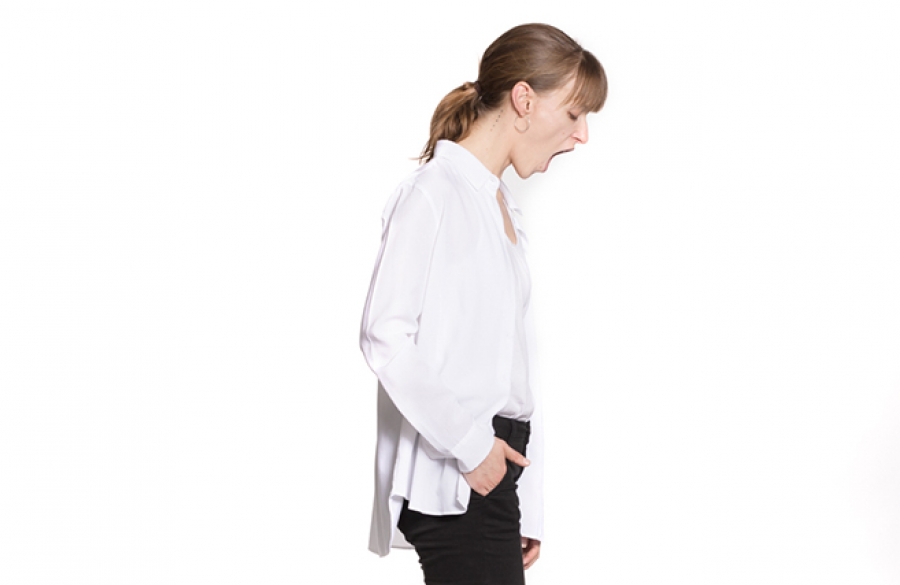 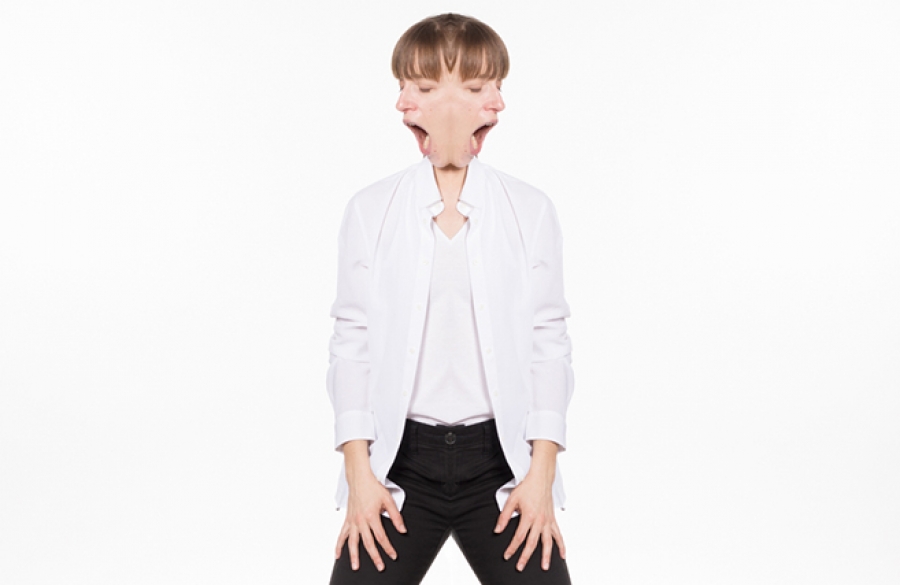 Quand je serai grande, je serai (guitariste de) Michael Jackson is a solo project born from the desire to explore Michael Jackson’s universe through the prism of childhood (dream, fascination) and musicality. The creative process took place between France and Québec from 2017 to 2019. It built a bridge between my two countries, a link between artists that I love (Cyril Journet in France, Helen Simard in Québec, and Enora Rivière who works on both lands). I also invited my twin brothers and sisters in this process, to get more in touch with my intimacy, and the one we shared as kids. I needed their eyes, their memories, their talents, and their presence. A solo piece is never a real solo piece, as it needs many people to emerge. This is the case of this one, which is kind of a multi-headed monster, as if many people were taling at the same time.

Native of Saint Malo in France, Marie Mougeolle moves to Montréal in 2010 and works with Katya Montaignac on her ODNI projects. She also develops her first solo creation, Entre autres, presented in France and Vietnam in 2014. Then, she collaborates with Liane Thériault and creates Mine de rien (OFFTA 2015). As a performer, she collaborates mainly with Les Soeurs Schmutt, Eduardo Ruix Vergara, Sarah Dell’Ava, and Helen Simard. She also has a practice of dance research, which began at UQAM’s Dance Department with a Master’s degree (2010-2014). Her research on interdisciplinarity and collective dynamics in creation led to several conferences (Montréal and Lyon, France), and articles (Jeu, L’Annuaire Théatral). She also teaches dance at École supérieure de ballet du Québec and École de danse contemporain de Montréal.

Former journalist and screenwriter who has become a stage manager for music and cinema, Mathieu Mougeolle has been practicing music since 2001. As a bassist in several groups, he explores different musical styles: rock, dub, and abstract hip hop. Recently, he discovered a passion for analog synthesizers and programming sequencers, which lead him to compose soundscapes based on electronic textures.

Trained in fashion design, Camille Mougeolle considers her profession as a plural practice. Her various expertise – from stage costume to couture, jewelry, graphic design, and illustration – led her to act as visual identity designer and artistic director for musicians. Her practices of drawing and video led to various collaborations on different artistic projects for singers, visual artists, and photographers (Spleen, Charles Serruya, Yann Orhan). Alongside her artistic projects that question the imprint of time, she also teaches graphic and fashion design at MODE ESTAH in Paris.

Enora Rivière is a dancer, writer, choreographer, and researcher. She collaborates with many European artists as a dancer, dramaturge, rehearsal or tour director. Her first project, ob.scène, gives rise to a book and a choreographic duet. With moteur, she affirms her approach, which melts choreographic and literary forms. Since moving to Montréal, she has collaborated with Kimberley de Jong on her solo piece Boxher, worked with the RQD, Fondation Jean-Pierre Perreault, Par B.L.eux, and Journées de la Culture, and was programmed at the OFFTA in 2018. She also created a piece for the Dance Department of UQAM, where she began a thesis in creation.

Helen Simard is a Montréal-based choreographer, rehearsal director, and performer. She began her career working with Solid State Breakdance from 2000 to 2011, participating in the creation of nine dance pieces presented across Canada and in Europe. Since 2011, she has been incorporating aesthetic elements of rock concerts into her choreography, creating a number of exciting interdisciplinary works, including On the Subject of Compassion (2011), Can You Hear Me? (2017), and Dance Side of the Moon (2018), in addition to the Trilogy Pop: NO FUN (2014), IDIOT (2017), and REQUIEM POP (2019). Helen has a BFA in Dance from Concordia University, and an MA from Université du Québec à Montréal.

Marijoe Foucher graduated from UQAM as a contemporary dancer. Since then, she took part in many artistic projects, most notably with Emmanuel Jouthe, Anne-Flore de Rochambeau, Claudia Chan Tak, and Philippe Dandonneau. These collaborations gave her the opportunity to perform in several festivals in Québec, Ontario, and France. Moreover, to share her strong interest for interdisciplinarity, Marijoe is involved with the collective Dans son salon as a performer and rehearsal director, and takes part in short dance film productions.

The turkey is roasted, the cranberries are sauced, the potatoes mashed, a glass of milk and cookies waiting fireside, uncle Joe had his fifth rhum’coke: the table is set for the holiest night of the year. But when the guests are gone and the lights have gone out, who remains alone, abandoned in the dim light of the basement or sitting through the scattered remains of the feast? Time stretches through the night for those left behind, condemned to relive this suspended moment between the end of festivities and the arrival of a most-awaited mythical red-cheeked avatar, reigning king of Val-David and shopping centres. 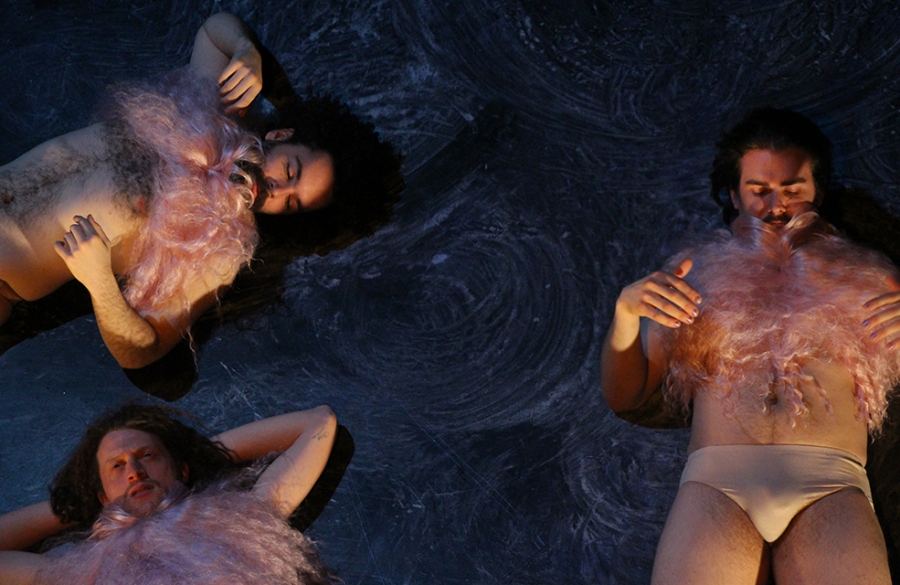 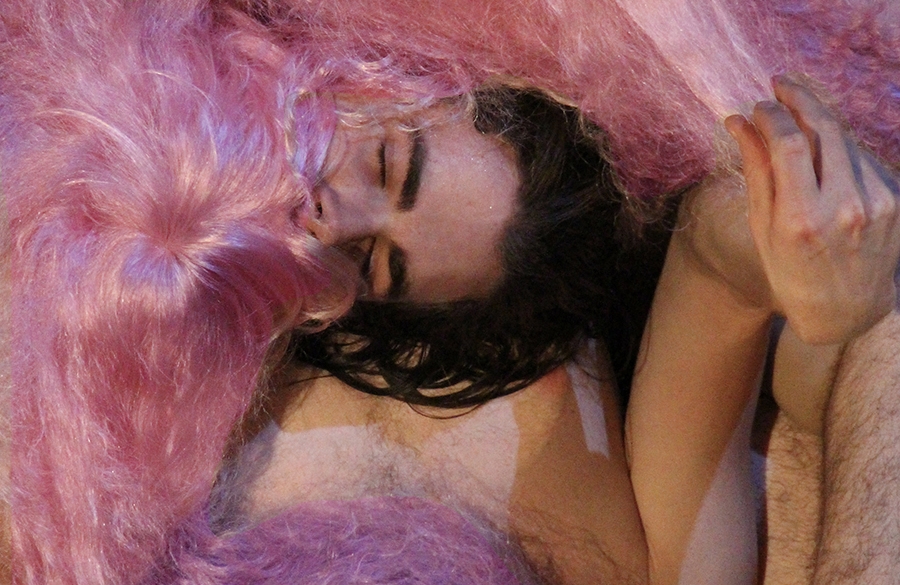 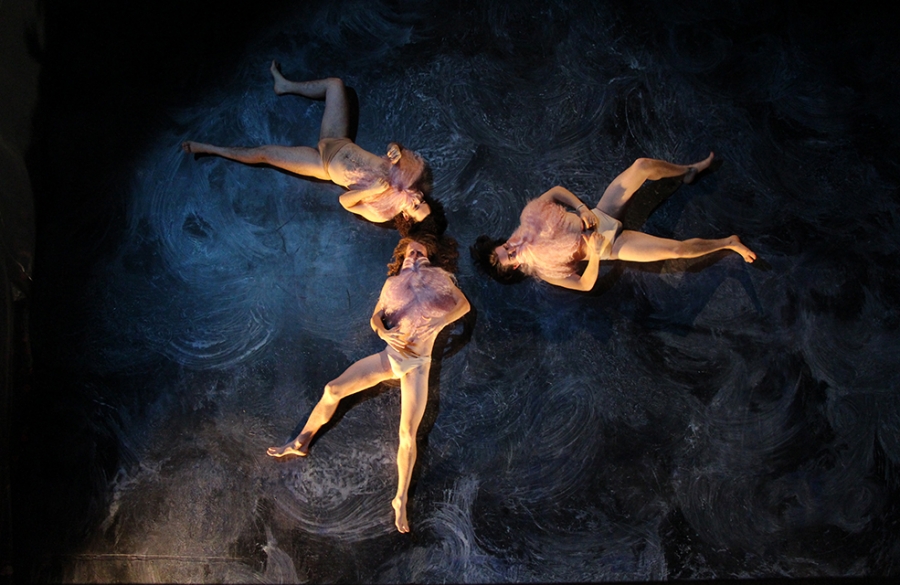 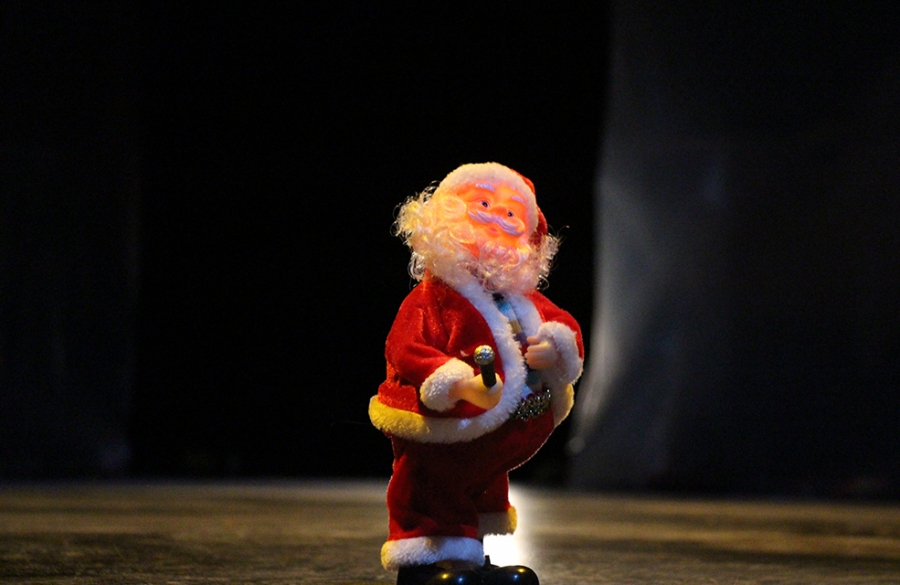 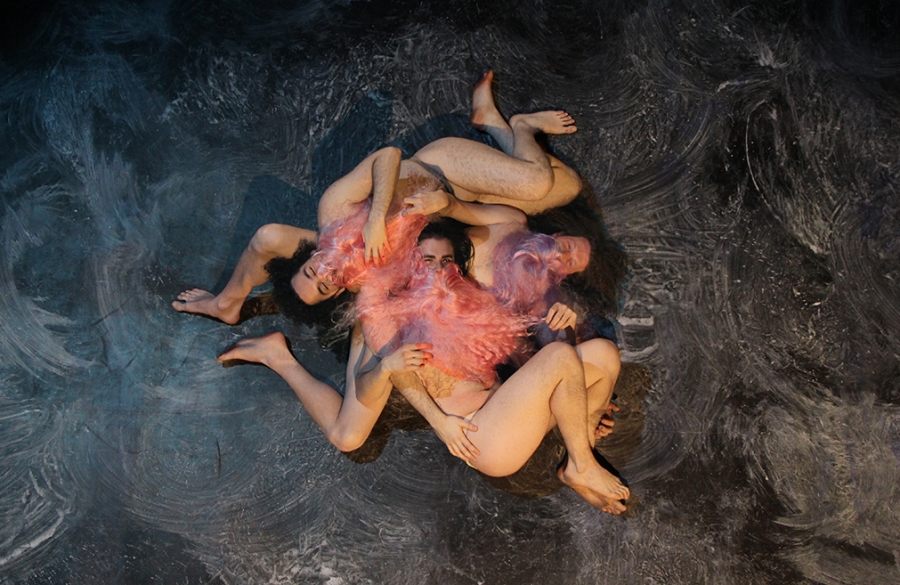 Welcome to the Lewski’s family party. We create movement through the use of chimerical costumes, by connecting several performers, or by creating the illusion that their bodies are modified. We presume that clothing and accessories can affect the body to the point of creating profound psychological and physical transformations. The costume seizes control of the body; it may be fought against or appropriated. Our aesthetic is irreverent, infused with pop culture, and designed to create illusions and deconstruct them in the blink of an eye. From discrepancies between sound, costume, space, and acting arises a suspended world defined by twisted codes that appear familiar to us. We worked on Santa Claus to communicate ideas on gender inequalities and on how we learn to behave in a docile consumerist way.

Set designer by training, torn between a childhood in Laval lulled by the red light of boulevard des Laurentides and an unassumed maturity fuelled by organic cheddar corn bread, Audrée Lewka explores the visual and physical universe of the stage. After almost submitting a thesis in archaeology, she reoriented herself towards the performing arts. She is interested in the externalization of individuality and personal imagination through the body, the space, and costumes. She has contributed to many projects such as Les Sangs (ZH, 2017), Parce qu’il fallait l’entendre de ta bouche (ZH, 2018), Cry Baby II (La Risée, 2018), H20 Egotrip (Mois Multi, 2019), and Poneyboyz (Danses Buissonnières, 2018;  OFFTA, 2019).

Originally from the Eastern Townships, David Emmanuel Jauniaux flirts with visual arts, improvisation, and theatre. When he arrives in Montréal at the tender age of 21, he concentrates on and distinguishes himself in intensive training at the contemporary mime company Omnibus. A graduate from École supérieure de théâtre de l’UQAM, he has been a performer and collaborator for Poneyboyz (Audrée Lewka, 2018) and Nos Corps (Castel Blast, 2019).

Born in one of Québec’s most criminalized cities, Guillaume Danielewski first studies theatre in Saint-Jérôme. At the same time, he joins his first punk band. He experiences his first love affair when he leaves his band to pursue theatre at UQAM. Nostalgic for music, he focuses on sound in theatre, as well as on the stage presence of artists in music and theatre. He directs his first production with Cry Baby II (La Risée, 2018) and collaborates on many projects as a sound designer.

Victor Naudet, Gemini at heart, with curls in the wind, confesses very early his desire to become an actor. He begins working as a voice actor at the age of 9. For more than ten years, he is very active in the dubbing business, lending his voice to many characters in film, television, and radio. In parallel, moved by his airy sign, he trains in classical and modern jazz dance. After training at Studio Théâtre d’Asnières, Victor Naudet decides to change course and move to Montréal. He obtains the honorary entrance scholarship to École supérieure de théâtre de l’UQAM, from which he graduates in 2018.

As a teenager cradled by the sleepy life of a dormitory town, William Couture discovers, upon moving to Montréal, kilometres of city inhabited by something other than cars. Since then, the human relationship with the city has been a subject that fascinates him, with urban lighting having a special place in it. Since graduating, he has had the opportunity to participate in many projects as a video and lighting designer: Ionesco Pixelisé (UQAM, 2017), Bâtardes (MAI, 2018), Temps Universel +1 (La Chapelle, 2018), L’émeute est une fête (pour corps polymorphe) (UQAM, 2018).

Emmalie Ruest receives her Bachelor of Dance degree from UQAM and is the recipient of the William Douglas Award in 2011. It is during her studies that she meets Karenne Gravel, with whom she founds Dans son salon. To date, the company has created two stage plays, two in situ plays, and a short dance video. Currently, the company is in the post-production stage for a dance web series and is working on a stage project that integrates screendance. As a performer, Emmalie has worked for many choreographers and artists: Manon Oligny, Peter Trozstmer, Dominique Sirois, Geneviève Jean-Bindley, Stacey Désilier, Sarah-Eve Grant, and Helen Simard. In 2012, she choreographs a modern ball for La 2e Porte à Gauche. She also participates in various film shoots and, in 2011, she choreographs with Karenne for Valaire (Misteur Valaire) for their large-scale show at the Montréal International Jazz Festival.

Pierre-Luc Lapointe graduates from École supérieure de théâtre de l’UQAM in 2015 with a degree in Theatre Studies and navigates between dramaturgical support, writing, and the management of cultural organizations. As a good impostor in the dance world, he polishes his vocabulary of movement and revels in bringing back to life his first loves (after the Ninja Turtles and the Powers Rangers, respectively): mythological figures.