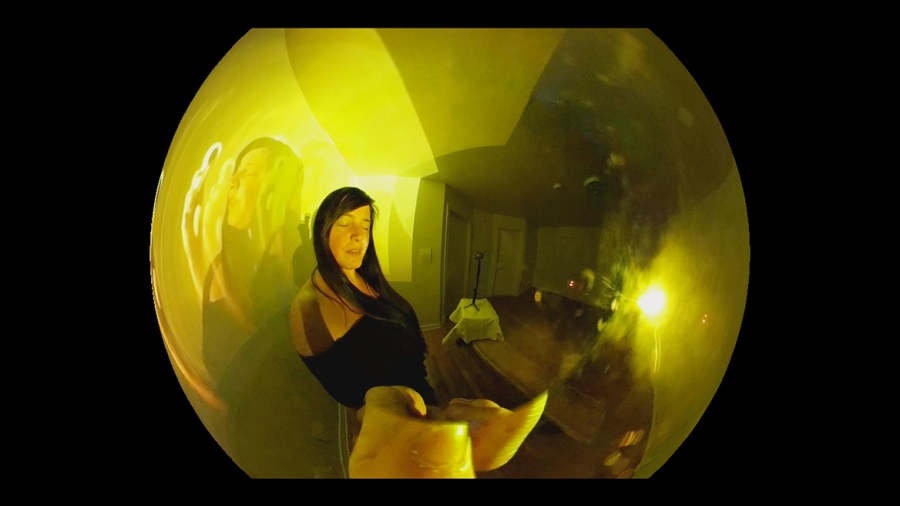 18 YEARS OF AGE AND OVER

DISCUSSION WITH THE ARTISTS ON MAR. 6

★ SPECIAL OFFER: On the occasion of International Women’s Day, you can purchase a ticket for the March 8th show at the special rate of 21$. To enjoy this offer, select a regular-rate ticket and use the promo code FEMME upon purchase. Discount only available for regular-rate tickets. ★

Residency offered in partnership with

When are we at our most vulnerable? Jane-Alison explores chaotic sides of her personality. At first androgynous and fully embodied, she grows into a monstrous rendering of her femininity. Little by little, she becomes larger than life, completely assuming this version that stands in contrast to her own being. Perched atop her stilettos, she towers over miniature furniture. This is a study of risk-taking and our strategies to manage it: what if staying really meant having to run away from ourselves so as to survive? Here is a response from a woman who has chosen to provide herself with the means to act. 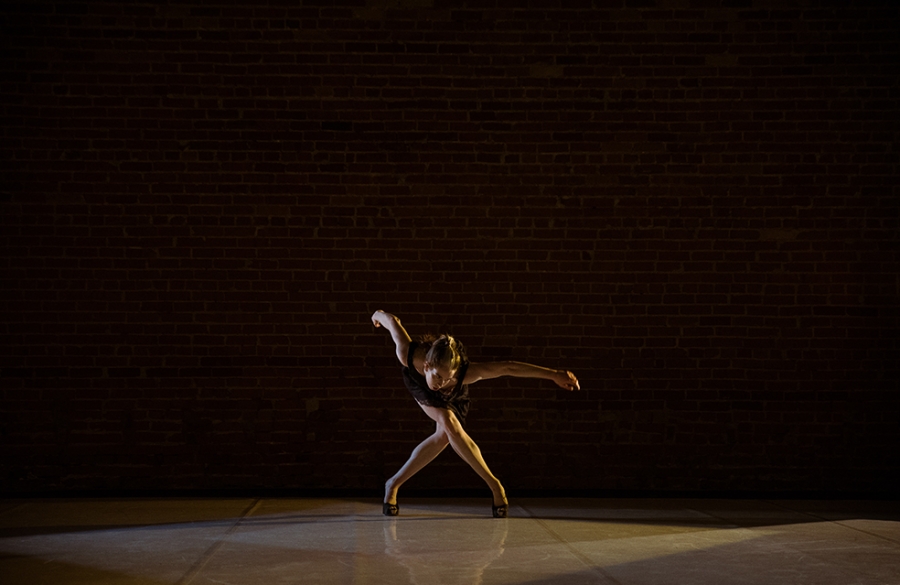 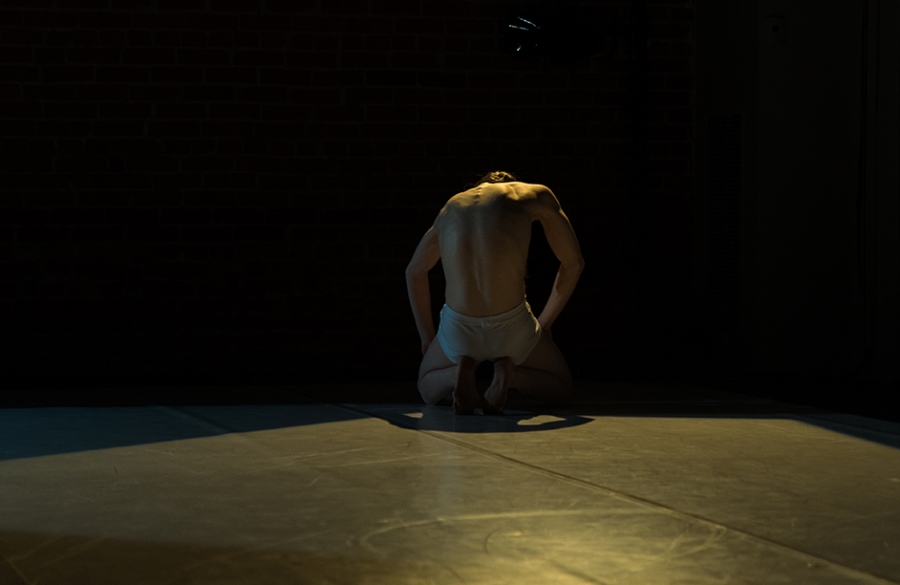 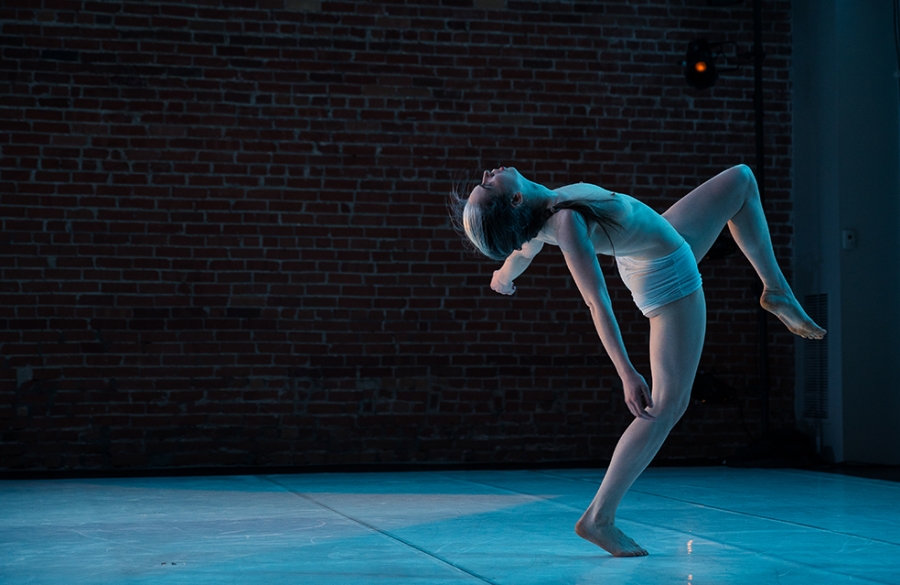 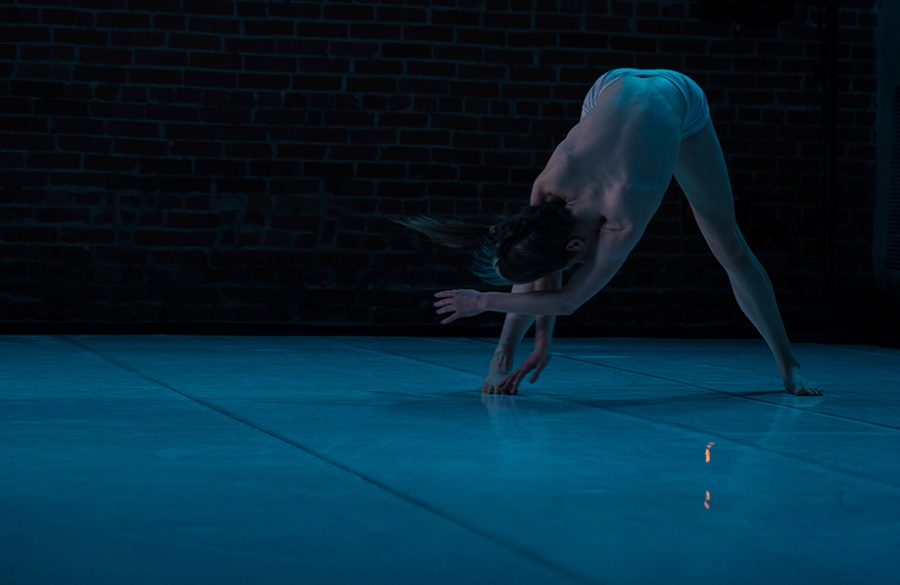 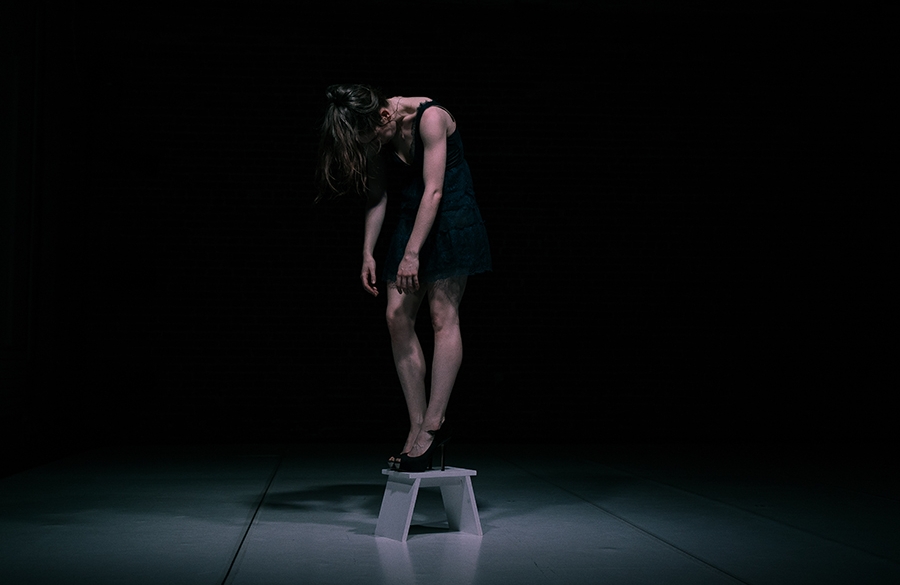 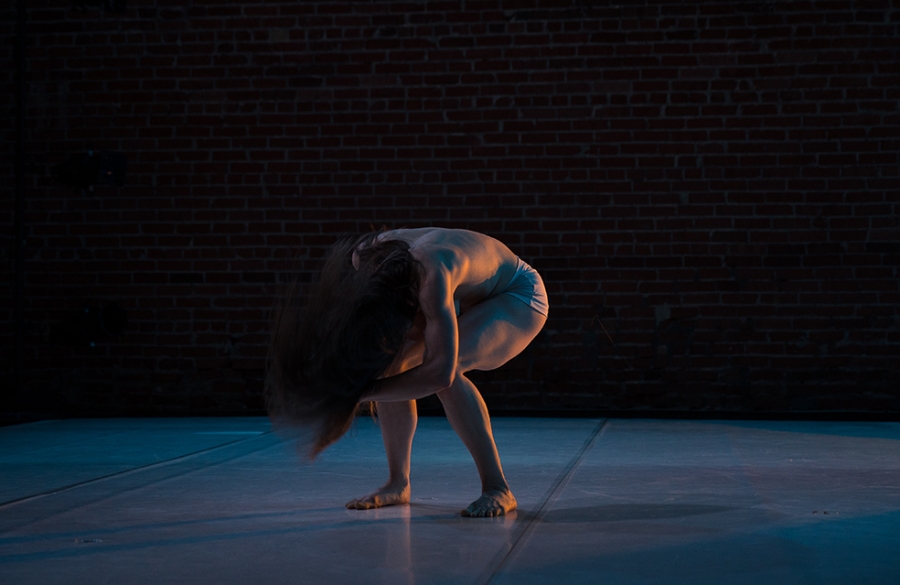 Outside eye and mentor Heidi Strauss

I’m driven by movement that is alive, always shifting, and escalating in possibility. My work is robust, unbound, and discernibly rough around the edges, with a physical language that is vulnerable and ever-changing, reflective of how I see the world around me. I create with text, gesture, human extremes and nuances, and emotional expression innate in the moving body. I then abstract and exaggerate these elements to discover a reimagined form and state of being. My work often slides into territory that is imaginative or surreal, derived from my desire to skew what is recognizable and transform perception. I’m interested in bold work that makes it possible to reflect on what is happening in the everyday, while altering time and reality.

Originally from New Brunswick, Jane-Alison McKinney is a dancer, choreographer, teacher, and artistic director. A graduate of The School of Toronto Dance Theatre, she has performed the works of a variety of contemporary dance artists in Canada and internationally. In 2016, she was awarded a Metcalf Foundation Internship Grant in Artistic Direction with adelheid under the mentorship of Heidi Strauss, whose close mentorship has played a profound impact on Jane-Alison’s artistic development. She has also worked with adelheid as a choreographer and producer of their emerging artist residency: re:research. McKinney’s choreography has been presented nationally at platforms such as Chinook Series, The Saint John Contemporary Dance Festival, Summerworks Performance Festival, Guelph Dance Festival, and Citadel + Compagnie. Her work was also showcased at Fall for Dance North’s International Presenters Program curated by Dancemakers. Jane-Alison is currently developing a collaborative group work titled Switch, as well as a co-creation with Emma Kerson entitled hard wire, initiated at Shawbrook Residency in Ireland in 2019.

Emma Kerson is a Toronto-based dancer, choreographer, teacher, and writer. Finding her footing as a creator through collaborative experiences, she has worked as a researching choreographer through Mocean Dance and adelheid. She was recently the recipient of a mentorship opportunity through Older & Reckless for 2018-2019 to work with Susie Burpee. As a dancer she has worked with Julia Aplin, Patricia Beatty, Elizabeth Chitty, Jennifer Dallas, Robert Derosiers, David Earle, Sylvain Émard, Michael Sean Marye, Sharon Moore, Peter Randazzo, and Lucy Rupert, amongst others. In 2017 she co-produced and performed in Blue Valentine presented by Citadel + Compagnie with works by Simon Renaud and Tedd Robinson. Emma is a graduate of The School of Toronto Dance Theatre and holds an Honours B.A. in English from Dalhousie University.

Dancer/choreographer Heidi Strauss is the artistic director of adelheid, which she founded in 2008. She was dance artist in residence at the Factory Theatre (2008-2012) and a resident artist at the Theatre Centre (2013-16). Heidi has choreographed for Toronto Dance Theatre, The Frankfurt Opera, The Canadian Opera Company, Volcano theatre, and the Stratford Festival, and given workshops across Canada, as well as in the Czech Republic, Germany, Italy, and Singapore. Her choreographic work has toured nationally. She received the KM Hunter Award for Dance (2012) and Dora Awards for her works this time and what it’s like.

Two women, two solos. A post-pornographic vision of sexuality. Revisiting the piece she presented as part of her master’s thesis and of the OFF d’Avignon festival, she asks: how do we shake up our limits without necessarily pushing them? First, a performer constructs and deconstructs feminine imagery using thigh-high boots and upper-body spiral movements. Then, on her back, another continues the search for infinite motion as she revisits pivotal moments in her life. This quest leads to the projection of a most intimate landscape as a camera reveals the artist’s internal movements. 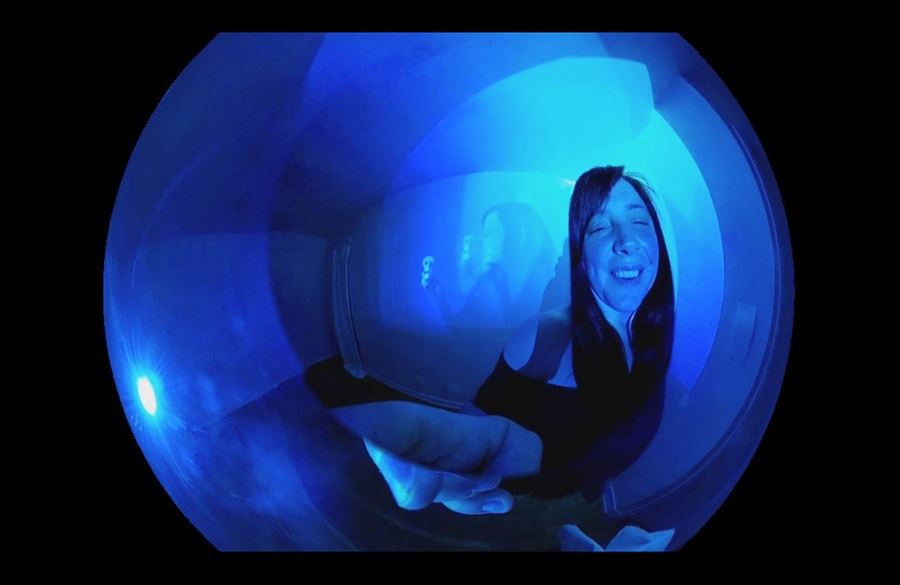 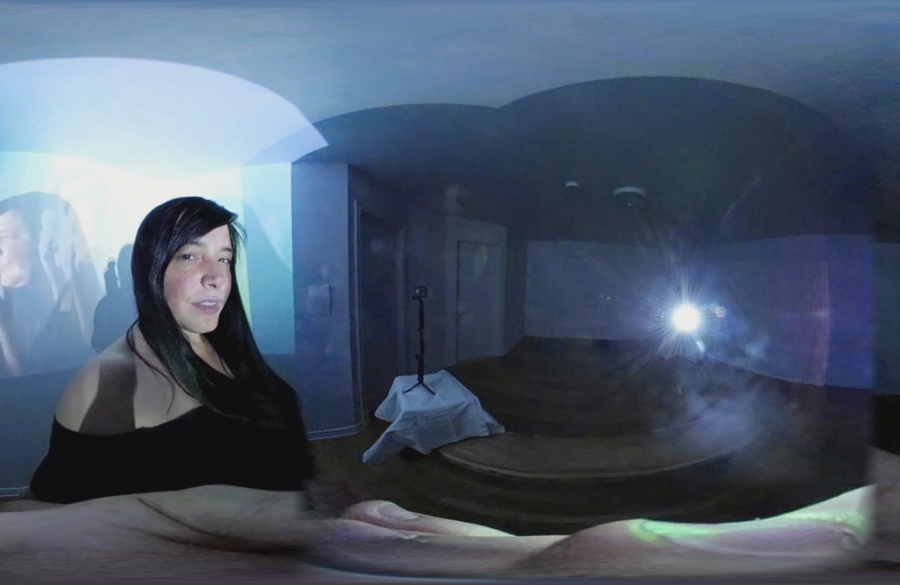 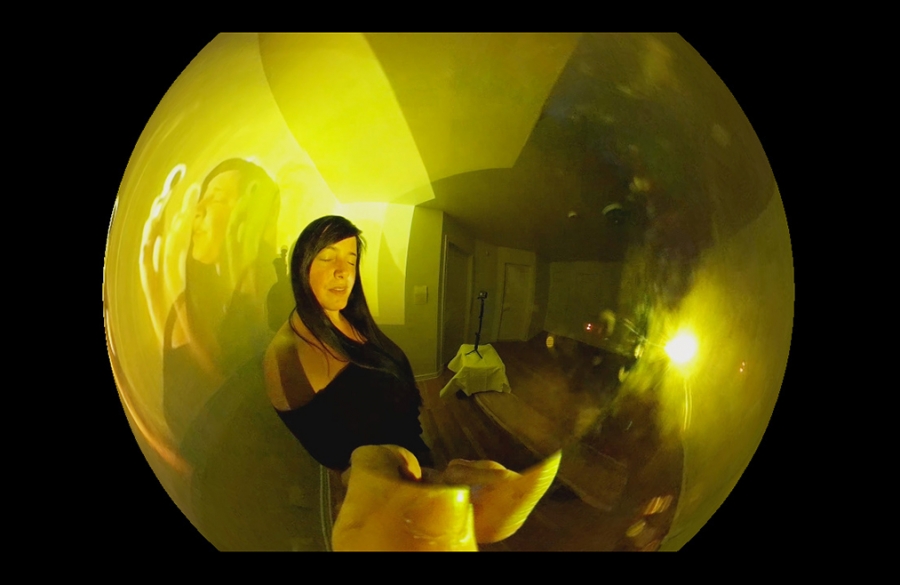 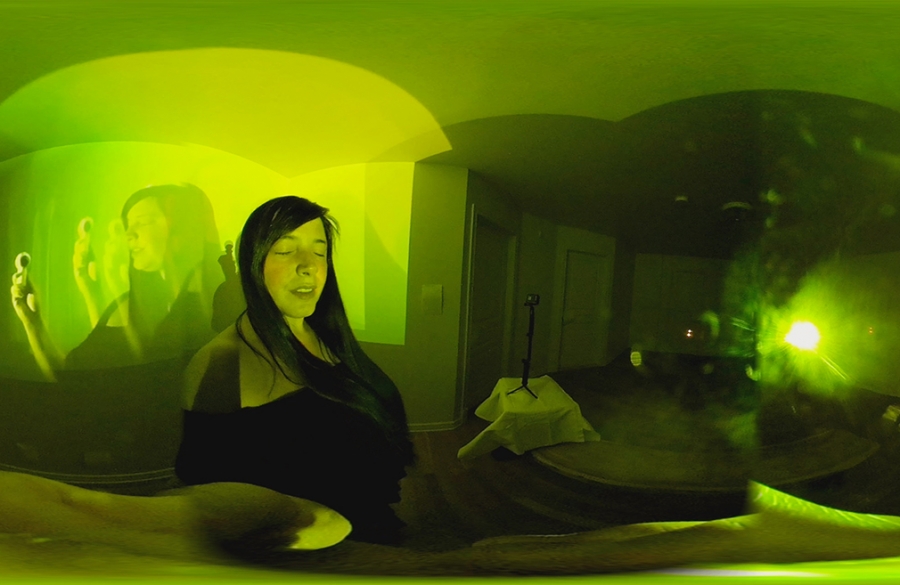 Collaborator to the creation of the visual apparatus Christophe Brand

This project is a recreation of the choreographic diptych consisting in the performance element of Geneviève’s MFA in dance, which was presented at festival OFF d’Avignon 2018 and titled Signé ∞Post-X∞, hence ∞POSTX∞. Rooted in the choreographer’s dance experiences at UQAM (2017), but also in France (2012, 2018), Singapore, and Australia (2015), and with the same main collaborators, the artist rethinks the substantiality of her master’s fundamental concepts. Thus, she challenges differently, in her artistic universe, the relationships involving unity and uniqueness, image and organicity, the origin of performative post-pornography, movement signature and dancing corporeity’s infinitude. While at UQAM, Geneviève was reviewing her choreographer-dancer posture and, while at Avignon, she was given more efficiency, precision, and amplitude of body movement; here she recreates the diptych, reconsidering its layouts, shaking up its temporality, and metamorphosing its mode of presentation. She improves her device, a 360-degree camera that blends objective and subjective live video recordings so as to better immerse the audience. She re-envisions the poetic character of her choreographic language’s flow from the system she created in 2012 that spurs movement inspired by infinitude. Then, she confronts it with post-pornography’s raw aesthetic so as to pursue her quest for a more equal visibility for feminine sexuality in dance.

Born in Montréal, Geneviève Smith-Courtois identifies as a movement artist specializing in the creative practice of self-authored movement research. She has always danced and will always dance. She is a graduate of LADMMI (2003) in contemporary dance performance and of UQAM’s MFA in Dance/Creation (2018). She earned an academic excellence grant (LADMMI) and an international mobility grant (UQAM). Geneviève recognizes her own posture as meta-artistic, interdisciplinary, and highly feminist. She has danced and created for a number of young artists, mostly women. She has notably danced for theatre and television. Also, about thirty young dancers have presented her works, including at Monument-National, in a dressing room at Place des Arts, at La Rotonde, at Vue sur la Relève, and at the OFF d’Avignon festival. Finally, she has recently collaborated with artists in France (2012, 2018), Singapore, and Australia (2015).

Juliette Pottier Plaziat is a university researcher and multidisciplinary artist. In her Master’s thesis in dance (UQAM), submitted in 2018, she explores the sacred dimension of eroticism in Mesopotamian art and rituals. She collaborates as a performer and rehearsal director on various contemporary dance projects that explore sexuality and femininity (Hot Dog, Poupée, Signé ∞Post-X∞) and recently co-founded the NU.E.S collective with Maude Choquet-Blanchette. She is also a burlesque performer and is passionate about somatic education. This body consciousness allows her to approach stage performance through feeling/sensory awareness and the present moment.

A native of Alsace, France, Christophe Brand is a visual artist who settled in Québec in 2006. He has worked in the field of video games for over 18 years in France, Scotland, and Québec, specializing in anything that involves movement, especially characters. Driven by a curiosity for the new media technologies, he has been collaborating with Geneviève Smith-Courtois since 2014, bringing his perspective and technical support to her work.