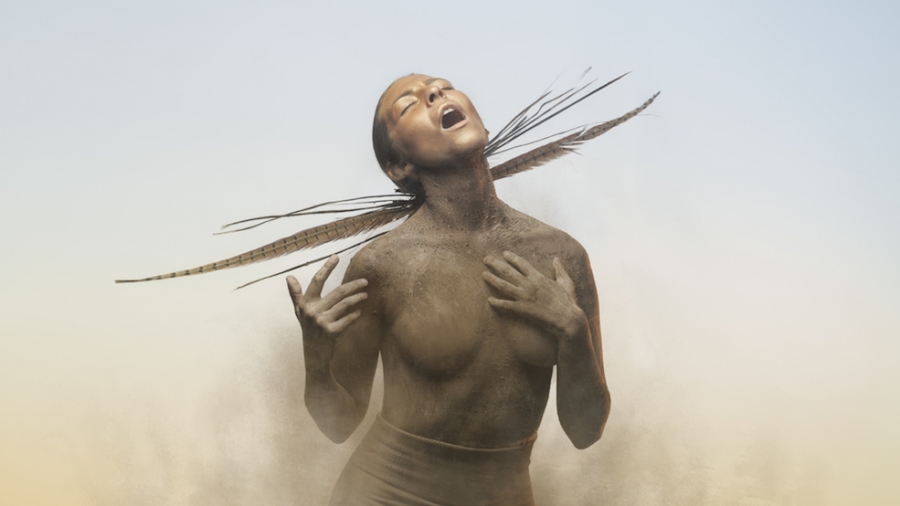 DISCUSSION WITH THE ARTISTS AND BOOK TABLE ON APR. 5

Physical
Facebook
The order of the pieces is subject to change.
1st work - 22 minutes

We hear the mesmerizing sounds of Pacific Ocean waves. A larger-than-life video projection of the performer’s body drifting in the water washes across the floor. She is moved without moving. For this young dancer from Manila, the creative process has been a personal journey of learning from the ocean, which stripped away her ballet training as she progressed from fear to acceptance. Nourished by her Christian outlook, she finds strength in vulnerability. Her folding and unfolding body feeds a poetic movement language that is unstable, fluid, and continuous. Sitting around her, we witness her surrendering to the water. 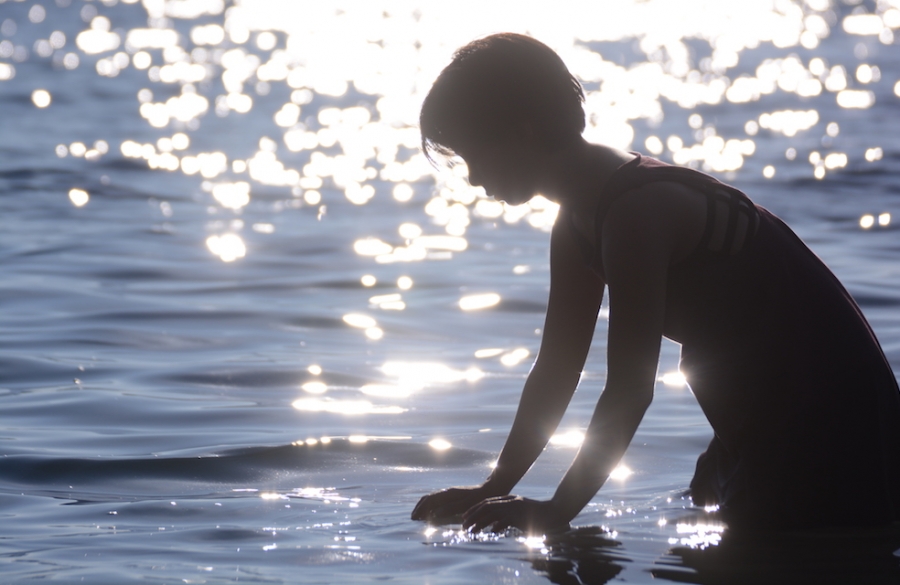 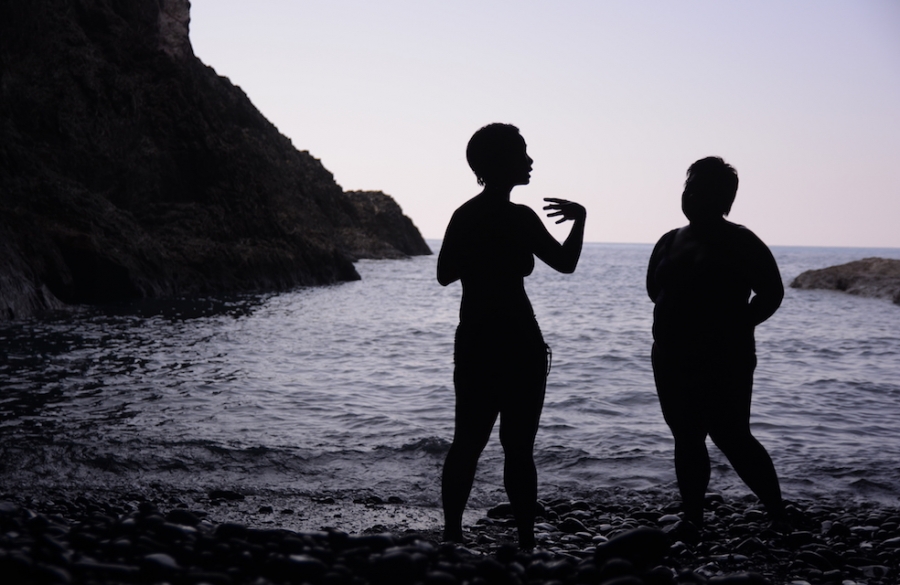 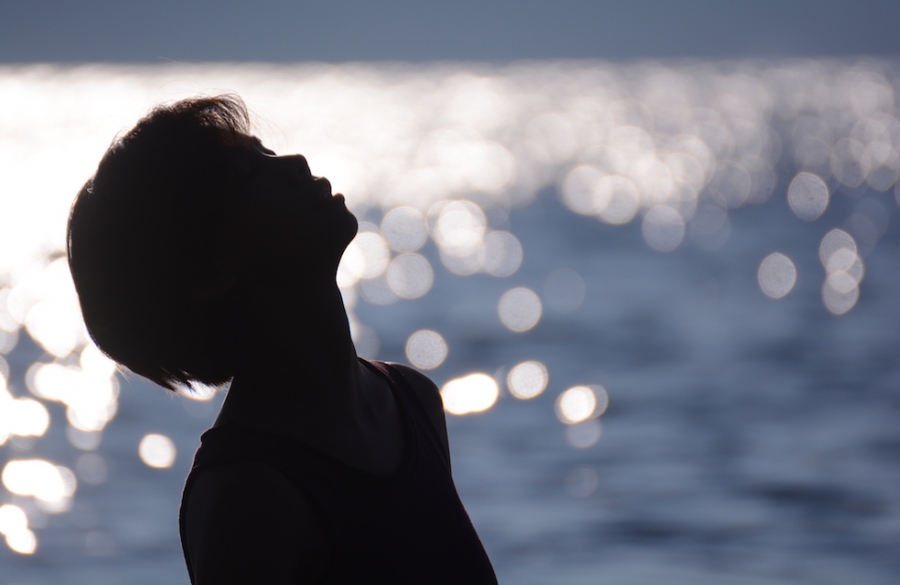 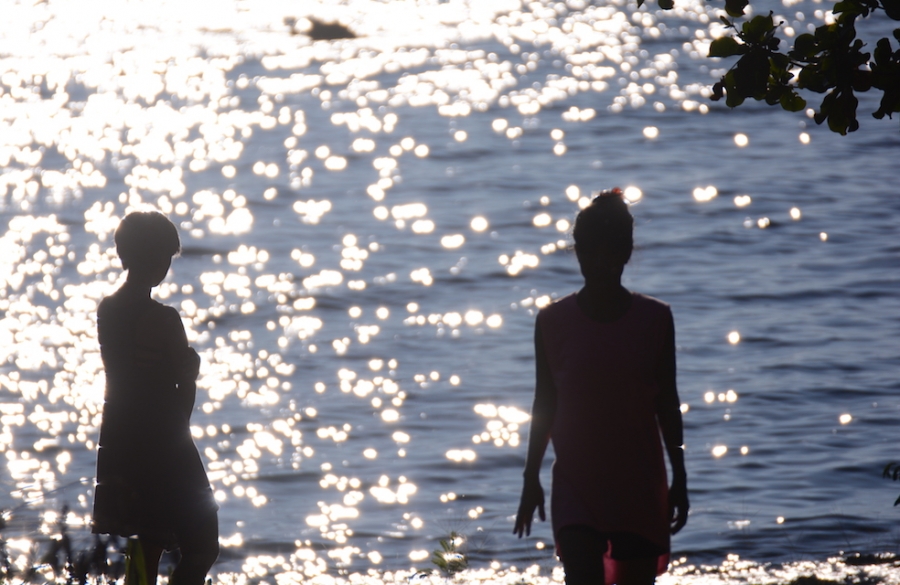 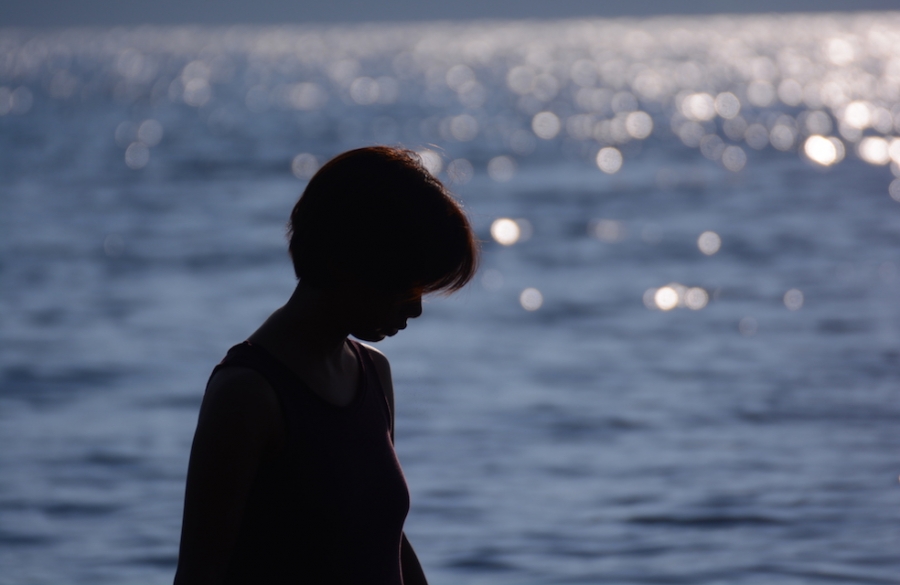 Collaborator to the choreography Roselle Pineda

Responding to soundscapes of the Pacific Ocean led me back to a short blog/podcast series (Nomadic Sound Worlds) that I currently produce at the Canadian Music Centre Ontario. Sparked by a compilation of essays named Letters of Transit: Reflections on Exile, Identity, Language, and Loss (ed. André Aciman, 1999), this series probed into the paradoxes of artist narratives under the phenomenon of global migration. Interviews with selected Canadian artists, including Montréal-based composer Sandeep Bhagwati and Toronto-based poet Bänoo Zan, unraveled reflections of homelands, cultural flows, displacement, and citizenship. In simulating an audio documentary for a dance project, the curiosity of creating electronic fixed media under the pretext of journalistic practice became a channel to create meanings not only in positioning one’s temporality in a world surrounded by oceanic bodies, but also with how humans drift through the tides of globalization within geopolitical spaces. Destabilizing the rigid lines of “otherness” and privileged spaces provoke negotiations even between boundaries within artistic practices, as one (including myself as a composer) confronts shadows among the rugged terrain between dance and poetry, between physical gesture and recorded interviews, between the physical body and its simulation through video projection, between sound art and journalism, between ephemerality and archived knowledge, between recollecting memories and losing them as a direct result of it. Where does one draw the lines; or rather, why draw them on massive oceans that erase all traces of them?

Sarah Maria Samaniego is a dancer, choreographer and dance teacher. She graduated cum laude from the University of the Philippines Diliman with a Bachelor in Music with a major in Dance. A senior member of the UP Dance Company, she assumes major roles in the company’s repertoire in the Philippines and abroad. She wins a prize at the 2012 Wifi Body Dance Festival New Choreographers Competition at the Cultural Centre of the Philippines with her work Nalaruan (In Playing) and premieres it at the 2013 Yokohama Dance Competition X Dance Showcase. In 2014, she attends the Southeast Asian Choreolab hosted by Rimbun Dahan and organized by the World Dance Alliance Asia-Pacific in Kuala Lumpur, Malaysia. In 2018, she participates in the Asia & Africa & Latin America Dance Exchange residency program hosted by the Seoul section of the International Dance Council – UNESCO as part of their Cultural Partnership Initiative and organized by the Korean Ministry of Culture, Sports and Tourism.

Originally from Windsor, Ontario, Chantal Labonté is a graduate of the University of Ottawa Theatre Department and the National Theatre School of Canada (NTC) Production Program. She specializes in lighting design for both French and English theatre. Since graduating, she has had the chance to work with Adrienne Wong, Isabelle Leblanc, Joel Beddows, Pier Rodier, Christian Lapointe, Vera Leticia, Jean-Stephane Roy, as well as emerging directors like Frederic Sasseville-Painchaud, Clara Prévost, Rebecca Vachon, and Eric Perron. She is also the recipient of two Best Design Curtain Awards of the Year in the Ottawa-Gatineau region for We will see by Théâtre du Trillium in 2016 and Les Passants, a co-production between the GCTC and the Catapult in 2017. Chantal tours internationally with Compagnie Marie Chouinard and assists lighting designer Nicolas Ricard in several productions, events and festivals.

Toronto-based composer Juro Kim Feliz has collaborated with artists including the Thin Edge New Music Collective, ensemble x.y, and Liminar, with works programmed in festivals like the MATA, Nief-Norf Summer Festival, Music Biennale Zagreb, and MUSLAB. He studied composition in the University of the Philippines (Quezon City) and McGill University (Montreal) under Jonas Baes and Melissa Hui, along with mentors including composers Dieter Mack, Liza Lim, Linda Catlin Smith, and the Japanese koto performer Hiroko Nagai. He received the Goethe Southeast Asian Young Composer Award in 2009, and has garnered premieres throughout Asia, North America and Europe on numerous occasions.

We enter a mystical white world, as if stepping into a drop of water. A soundtrack by Moe Clark, multidisciplinary Métis poet and looping pedal composer, fills the space. A Mexica choreographer, Leticia grew up in Mexico City, where water did not flow freely. Through photography, sound and dance, she pays homage to the power of water and depicts the effects of its scarcity. Dressed in white, three women become guardians of water’s spirit and purity, moving with the calm strength of a lake, then with the density and sustainment evoked by dryness. To be thirsty is to hover between life and death. 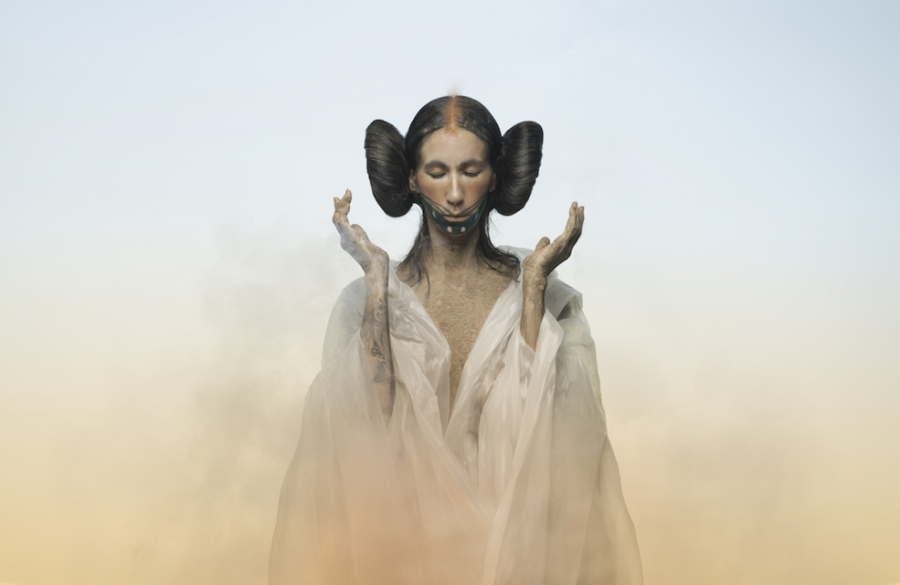 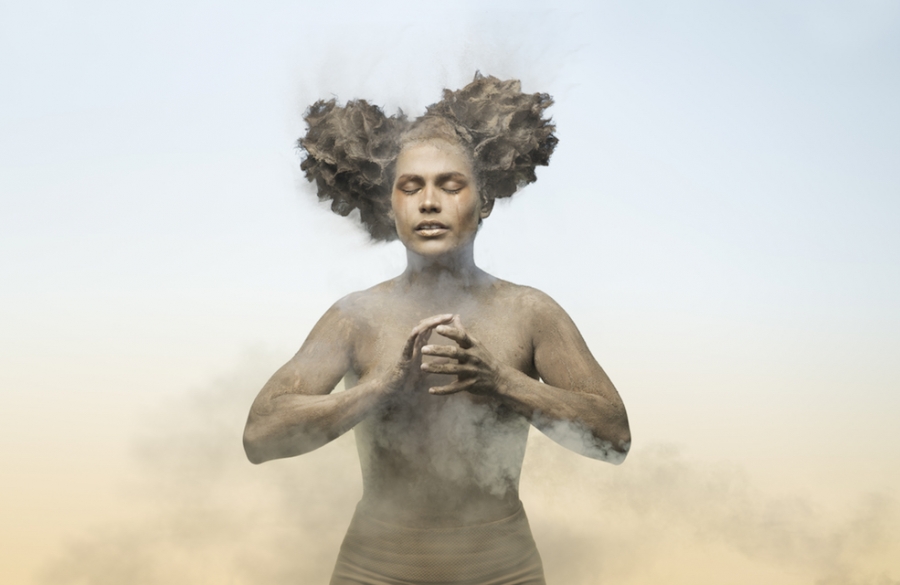 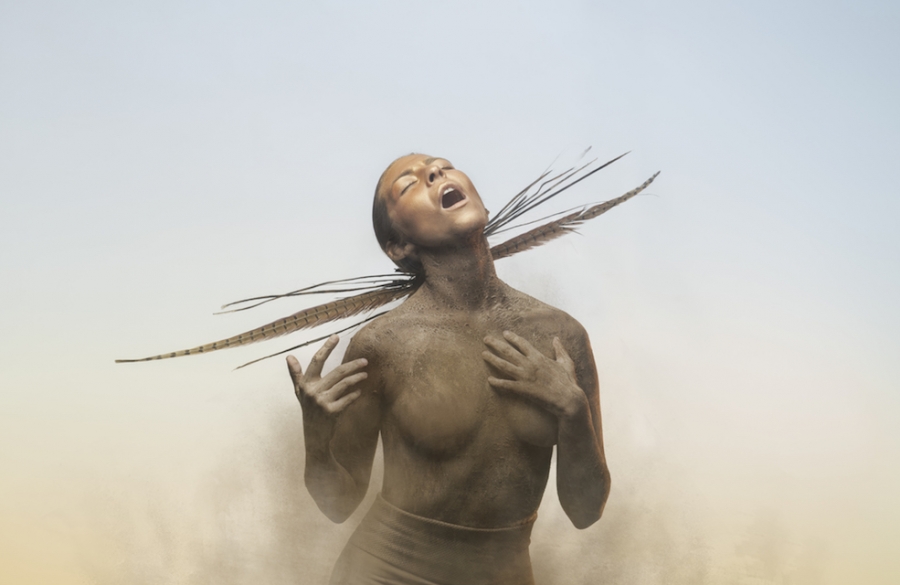 Leticia Vera is part of Alliance – a MAI (Montréal, arts interculturels) support program for artists, and this project is financed as part of Entente sur le développement culturel de Montréal by the City of Montréal and the Québec government, as well as the Canada Council for the Arts.

A choreographic-interdisciplinary piece that brings together dance, photography, recorded sound effects and singing.
I let myself be carried away as a creator by the spirit of water and its counterpart, drought. The entity of water and thirst would be embodied by three female performers through their dramatic movements. Several metonymies and metaphors will give meaning to the main aspects of the symbolism that I would like to express during the play.
A first exploration-creation residence will take place from August 7th to August 11th, 2018, which will include:
– The three performers for the length of the residency, the multidisciplinary artist for musical composition over two sessions, two sessions for the photographer, and for the last session the lighting designer will be present.
– During autumn (date to be specified) there would be a photo session with the artist Damian Siqueiros.
– A second creation residence and editing is planned from March 27 to April 3 at Tangente.

Originally from Mexico, Leticia Vera specializes in the exploration of body dramaturgy, choreographic creation, and contemporary stage performance. She holds a Diploma in Contemporary Dance from the Escuela Nacional de Danza Contemporanea INBA (Instituto Nacional de Bellas Artes) in Mexico. In 1992, she began her work as a performer in Mexico and worked with several choreographers in the field of dance theatre. Living in Canada since 2006, she continues her career as an artist, performer, and choreographer. In 2009, she collaborated with Gaétan Gingras/Manotowapan Company in Montréal, Sandra Laronde/Red Sky Company, and Neil Ieremia/Black-Grace (Toronto/New Zealand, 2010). Since 2010, she has been an associate artist of the French-language Aboriginal theatre company Ondinnok, and has been actively collaborating with other multidisciplinary contemporary artists. Recently, she presented her first staging in Montréal with Les Productions Ondinnok, El buen vestir-Tlakentli, presented at the Monument-National.

A graduate of the Montréal School of Contemporary Dance in 2014, Ivanie Aubin-Malo then received the teaching of the “Fancy Shawl” dance from Curtis Joe Miller. As a Quebecoise and a Maliseet, Ivanie addresses issues related to her Aboriginal identity through dance. She collaborates with several talented artists such as Marie Belzil from Moment Factory, Tanya Lukin Linklater, KXO DJ, Buffalo Hat Singers, Moe Clark, Barbara Diabo, Alex-Ann Boucher, and Soleil Launière. In 2016 and 2017, she choreographed and performed in two pieces: Ktahkomiq, produced by Ondinnok, and Mito-Jogos de recusa by Marcos Nery, presented at the SESC festival in Brazil. Ivanie complements her practice by passing on her passion to younger people.

Barbara Kaneratonni Diabo originally comes from the Mohawk Nation of Kahnawake and is now living in Montréal. A professional dancer and choreographer in many styles for over 25 years, she currently specializes in both traditional and contemporary Aboriginal dance, especially in the hoop dance. She takes great pride in regularly sharing her culture, and has performed across Canada and internationally. She has taught all ages, from babies to elders, through dance, music, storytelling, and interactive workshops. Her goal is to inspire others, encourage cultural pride, uplift the spirit, and increase education and communication.

Born in Mexico, Mariana Minutti spent much of her young life in Montréal. She has established a bridge between her country of origin and Canada. This cultural exchange currently allows her to find her own way in the performing arts. Mariana is looking through the traditional dances of Latin America, body dramaturgy and theatre. She began her theatrical approach in 2014 when she resided in Mexico under the direction of Manuel Blanch through theatre of objects and puppets. In 2015, she participated in the International Dance Festival in Mexico with Mexican choreographer Alina Ramos. In Montréal, she was invited as a dancer-performer at the Cabaret Trente ans d’accomplissement Ondinnok in 2015. Currently, Mariana teaches children’s theatre and dance, and has just completed her first year of training at Cégep de Saint-Laurent in the theatre option with teachers Pascale Rafie, Gilbert Dupuis, and Pascal Belleau, among others. She completed an internship at the National Theater School of Canada under the direction of Vincent Côté.

Métis multidisciplinary artist Moe Clark is a nomadic songbird with wings woven from circle singing and spoken word. Originally from Treaty 7, she’s called Tio’tia:ke (Montréal) home for over a decade. Moe fuses together vocal improvisation with multilingual lyricism to create meaning that is rooted in personal legacy and ancestral memory. Apart from performance, she facilitates creative workshops, she produces festivals and performances, and she mentors emerging artists. Recently, she launched nistamîkwan, a transformational arts organization with an emphasis on intercultural collaboration.

Originally from Windsor, Ontario, Chantal Labonté is a graduate of the University of Ottawa Theatre Department and the National Theatre School of Canada (NTC) Production Program. She specializes in lighting design for both French and English theatre. Since graduating, she has had the chance to work with Adrienne Wong, Isabelle Leblanc, Joel Beddows, Pier Rodier, Christian Lapointe, Vera Leticia, Jean-Stephane Roy, as well as emerging directors like Frederic Sasseville-Painchaud, Clara Prévost, Rebecca Vachon, and Eric Perron. She is also the recipient of two Best Design Curtain Awards of the Year in the Ottawa-Gatineau region for We will see by Théâtre du Trillium in 2016 and Les Passants, a co-production between the GCTC and the Catapult in 2017. Chantal tours internationally with Compagnie Marie Chouinard and assists lighting designer Nicolas Ricard in several productions, events and festivals.

Self-proclaimed artivist Damian Siqueiros uses a combination of traditional media (photography, choreography, painting, and set design) in order to activate reflection on contemporary social issues. While Siqueiros’s oeuvre is presented through photography, the creation of his images brings him to have a multidisciplinary practice: he becomes a make-up artist, a stage designer, a director, a photographer and a digital artist. He has contributed to reshaping the visual representation of contemporary dance and ballet in Québec, collaborating with seminal artists such as Margie Gillis, Sidi Larbi Cherkaoui and Hélène Blackburn, and institutions such as Les Grands Ballets Canadiens. Damian has created more than 60 exhibitions in Canada and internationally, notably in Washington D.C. at the Art Museum of the Americas, in Miami at the Frost Museum, in Mexico, in South Korea at the MMCA Goyang Residency, in Toronto, Montréal and New York, where he recently had a retrospective of his work in the prestigious Tambaran gallery.