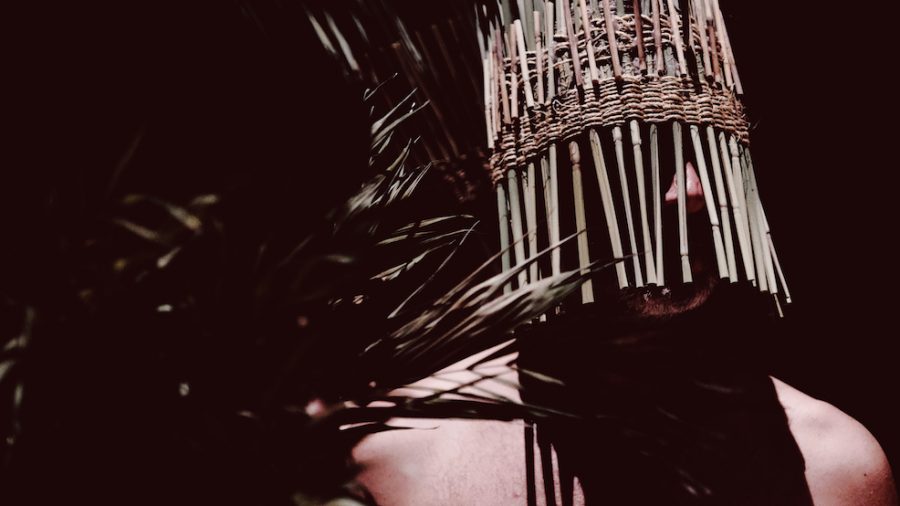 DISCUSSION WITH THE ARTISTS AND BOOK TABLE ON JAN. 18

Facebook
The order of the pieces is subject to change.
1st work - 50 minutes

In calm and darkness, a naked micro-society of human beings materializes. The physiologically disparate tribe lies strewn across the floor in fetal crouches. Their eyes are closed. Ever so slowly, they unfold, come to life and instinctively gather to form a magma of entangled bodies. As these tableaux progress, the sense of well-being deteriorates. Nudity is no longer tolerated. Clothing appears, but these airy sculptural garments only serve to sexualize the flesh, hiding nothing. By exposing the natural body’s raw power and vulnerability, this performance concrète reimagines the birth of humanity through a sociological lens. 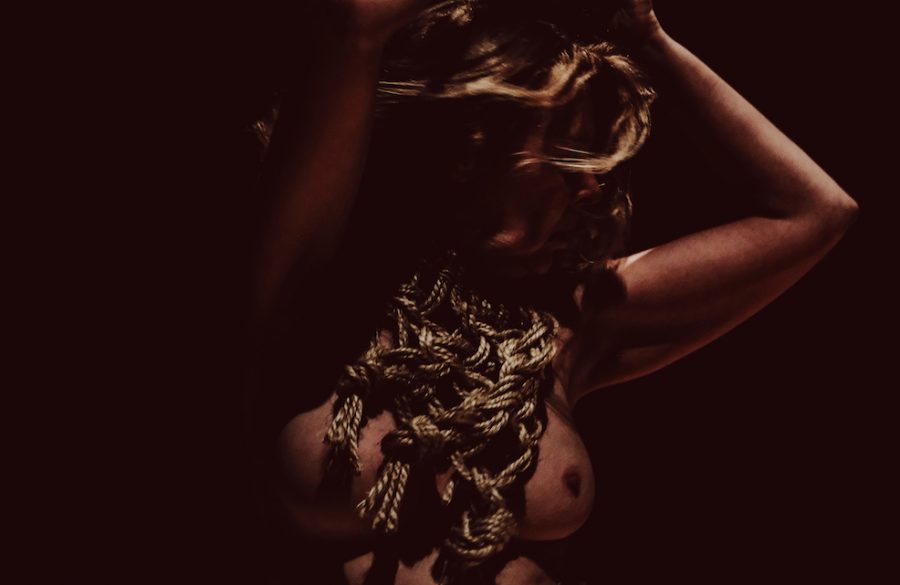 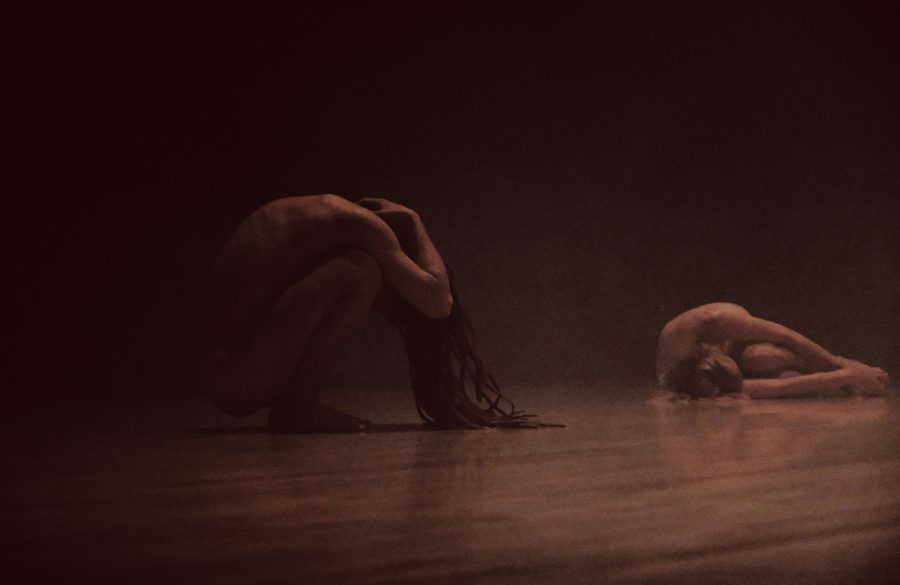 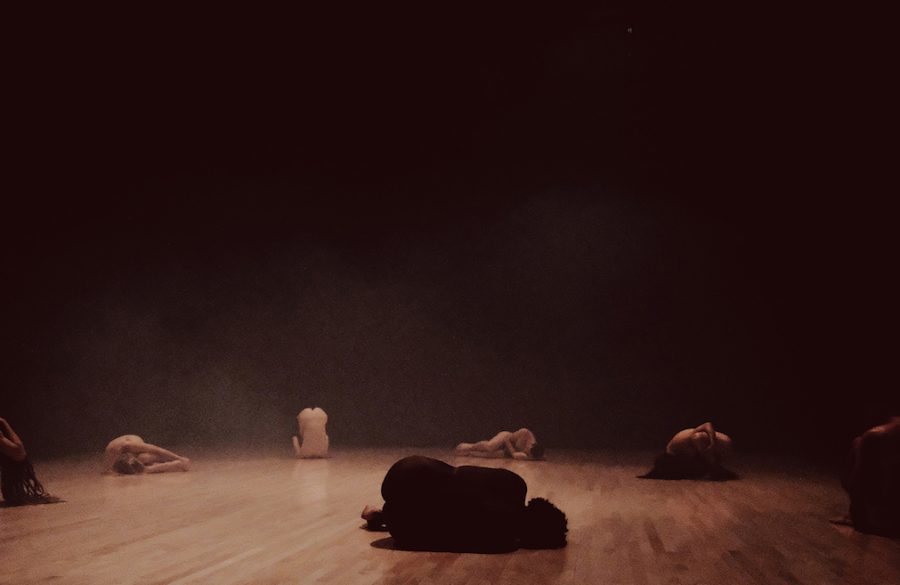 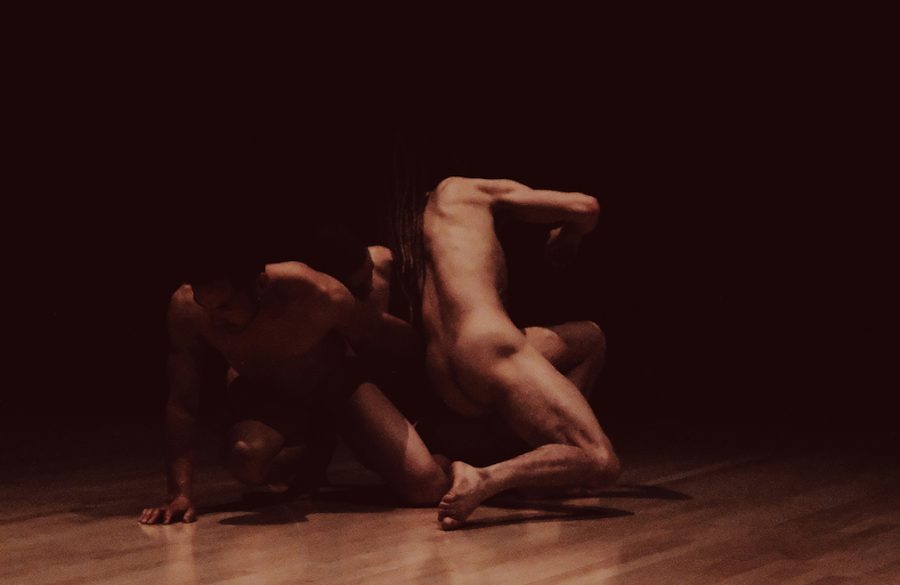 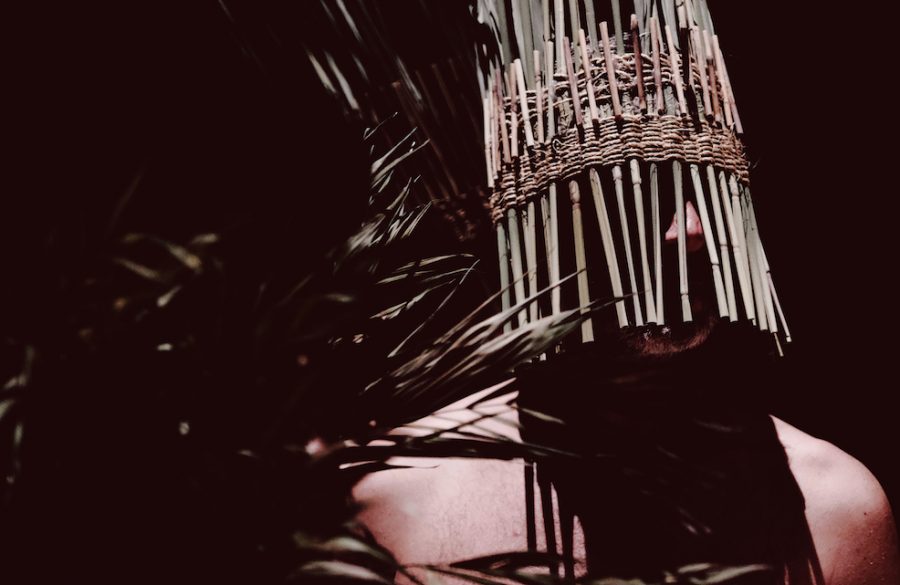 By exposing the vulnerability but also the strength of naked bodies in FORÊT, I am trying to explore the genesis of human beings and propose a sociological vision – with an anthropological approach – of the state-body where the norm would exist. Following the rhythm of a succession of scenes underlining the inter-social aspect of nudity, I recount the process of opposition between body and mind, matter and spirit, shifting from reason to morality. From its original clear state to its actual public controversy, I suddenly felt the need to unfold a reconciliation ground for the audience’s perspective of nudity, for them to become witnesses of the true existence and the physiological diversity of the performers… until the naked body gets banned from society, and clothes eroticize and sexualize the body more than ever. Thus, the organic costumes come into being and its matter dictates its appearance just as much as the performers’ movement.

Élian Mata was attracted to visual arts from a young age. In 1997, as he settles in Canada, he founds his company Productions EM. He thus gets interested in different mediums: music, dance, performance art, the visual arts. As he stars working on music tour sets, his attraction to organic material shows. He later integrates the Center for Artists at Espaces Émergents under the chairmanship of the art historian Henri Barras. Today, through his company he works as an artistic director, creator and designer. His productions have been presented in Canada and abroad. He is currently working on his most personal project to date, FOREST, a piece where the undressed body is mixed with organic material, where visual art and performance merge!

Jacqueline van de Geer settles in Montréal in August 2005. Her hometown, Rotterdam, bombed at two occasions, is marked by the Second World War. Growing up in a rebuilding city has taught her a lot about doing a lot with almost nothing. Some of her inspirations for her creative work are everyday life, Dada, and personal memories. Since receiving her immigrant status in Canada, she has developed performances where spectators are invited to participate. The goal is to transform the distance between the artist and the viewer into a meeting where the distance will be almost dissipated.

Born in France, Matéo Chauchat joined the company Les Orteils de Sable (Saint-Étienne, France), directed by choreographer Mireille Barlet, early in his carrer. At 18, he enters École de Danse Contemporaine de Montréal, from which he graduates in 2017. Since then, he has mainly worked with Sarah Dell’Ava and Élian Mata. On top of his career as a performer, he seeks to deepen his artistic sensitivity as a choreographer, where he questions the impact of art on man. He has presented his work different times in various events, including the SOIR Festival.

Marianne Gignac-Girard graduates from École de Danse Contemporaine de Montréal in 2005. Between 2005 and 2008 she works on Cirque du Soleil’s show Love, directed by Dominic Champagne and choreographed by Dave St-Pierre. Back in Montréal in 2008, she dances for up-and-coming artists. For the next five years, she dances for Ginette Laurin (O Vertigo) in several productions. Marianne also teaches Pilates and has worked as a rehearsal director for O Vertigo and others.

Except for taking part in a musical in cégep, Jean-Philippe Ung has no experience in the arts. Despite this, the arts have always attracted him and his passion was enriched through friends working in music, the visual arts, dance, and other art forms. In contrast to his professional environment, which requires a rational and cartesian mind, the arts have fascinated him for their creative, unknown, dreamlike aspect. Having consumed culture in abundance as a spectator, when the opportunity to perform presented itself, he jumped on it without hesitation, meeting this immense personal challenge head on. Jean-Philippe’s participation in FORÊT also illustrates the accessibility and the diversity of the piece.

Naïla Rabel is an actress who also studied dance at Collège Montmorency and who is currently studying in cinema. Galvanized by environmental protection, the exploitation of women and children in the fashion industry, veganism and minimalism, she shares her convictions on her YouTube channel. Participating in FORÊT was an evidence for her since it deals with diversity, sexuality, raciality, body shapes… With her participation in FORÊT, Naila wants to overcome the fact that her body has often been an obstacle and aims at inspiring overweight people to accept their body and realizing their full potential.

Graduated from LADMMI (2005), Jessica Serli is active in the Montréal scene as a dancer, a choreographer, and a rehearsal director. As a performer, she has participated most notably in the projects of Estelle Clareton, Line Nault, Milan Gervais, Andrew Turner, Bouge de là, Audrey Bergeron, Amélie Rajotte, Normand Marcy, Jacques Poulin-Denis, and Emmanuel Jouthe. As a rehearsal director and outside eye, she has also collaborated with Annie Gagnon, Ian Yarworski & Philippe Meunier, Floor Ryder and Tonik, Compagnie Bourask, and Alan Lake Factori(e), among others. As a choreographer, Jessica has presented -40 Degrés (2005), Entre-Deux (2008), La Fièvre (2013), Petite faille solo (2015) and Faille: Deux corps sur le comptoir (2016-2018).

Hugo Dalphond questions synergy between body, space and light through the elaboration and building of scenographic devices conceived to initiate meetings. It is chiefly by making viewers and performers coexist and by modulating their perception of the space they share that he creates alternative sensorial experiences. This becomes a reason to engage in different co-presence qualities, and thus to gain consciousness of their interactions and rapport with others. Since 2015, he tackles these questions in a PhD that tackles light installation and the spatial opportunity it offers to rethink our collective states. He also collaborates as a lighting designer and director of scenography on various projects in theatre and dance (Projet Hybris, Daina Ashbee, Collectif La tresse, Andre Pena, Anne-Flore de Rochambeau, Claudia Chan Tak).

This artist-scholar defies traditional notions of circus performance and audience encounters. In the first of two politically charged studies, we circle her, gazing down at her as she dangles like a carcass. In counterpoint to the sinister sounds of Bach on banjo, she claws for her humanity, slowly folding and unfolding. For her second piece, as an anthropomorphized molting cicada, she manipulates a delicate parachute like a living sculpture. Her grotesque aesthetic embodies feminist discourses on dehumanization, violence, motherhood, aging, and obsolescence. A stirring and meditative encounter. 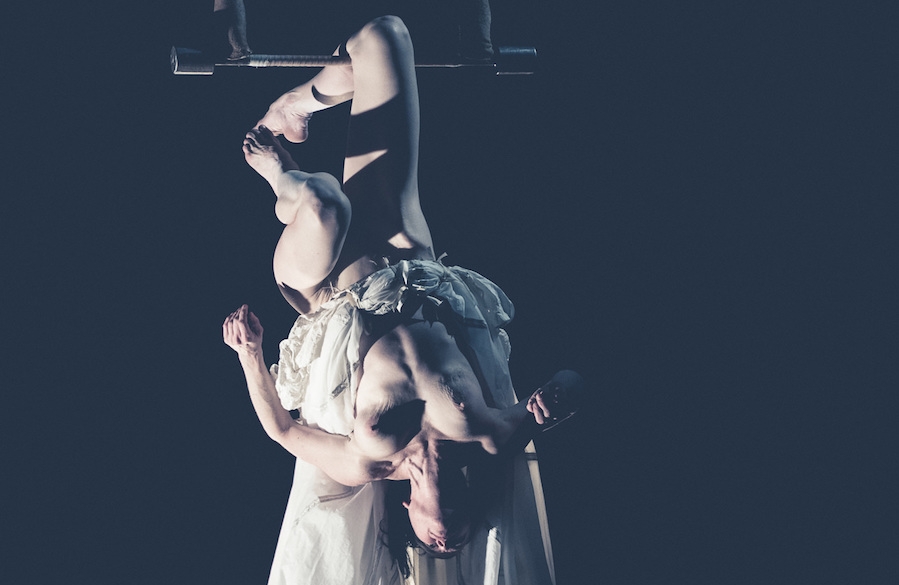 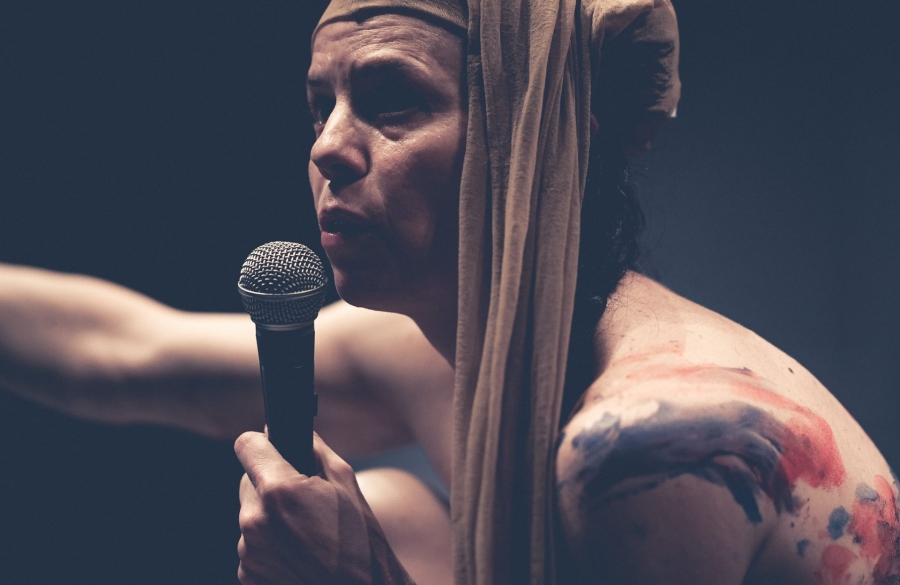 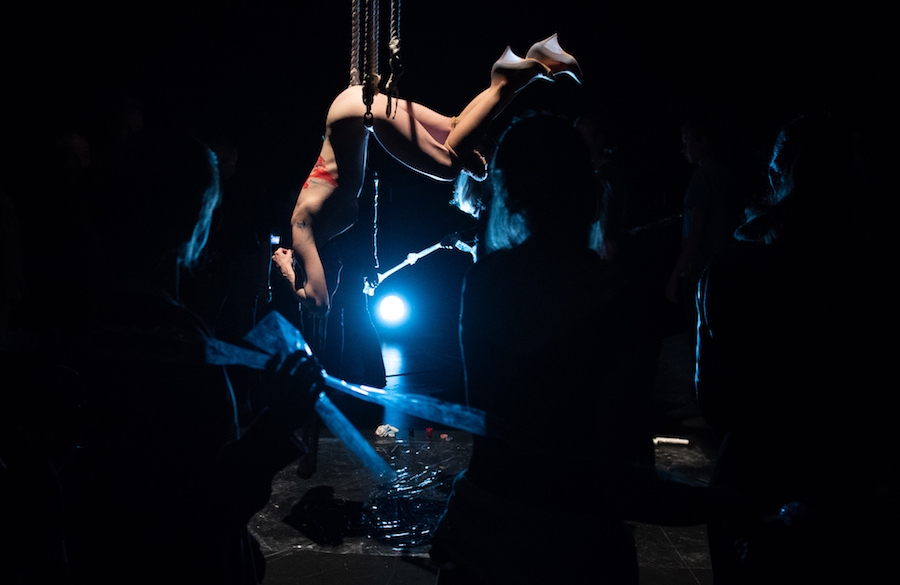 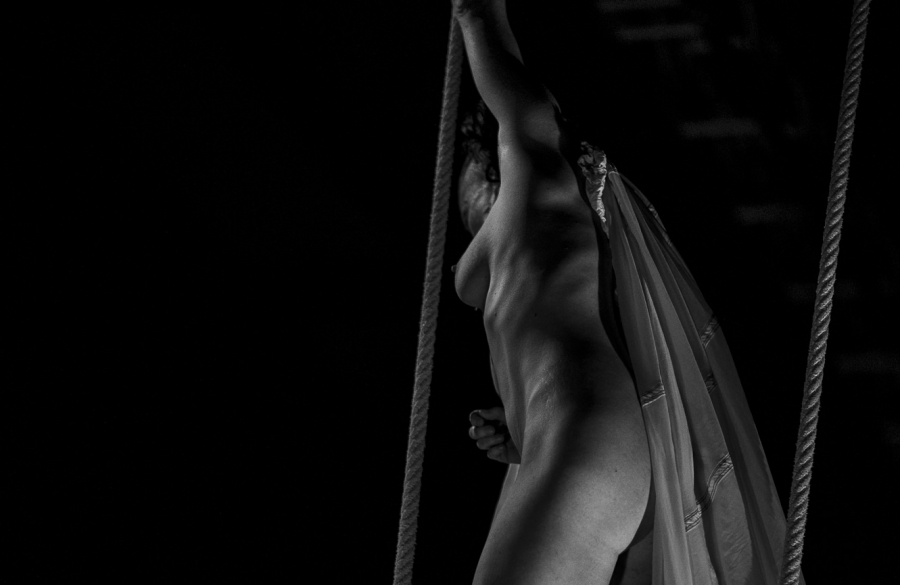 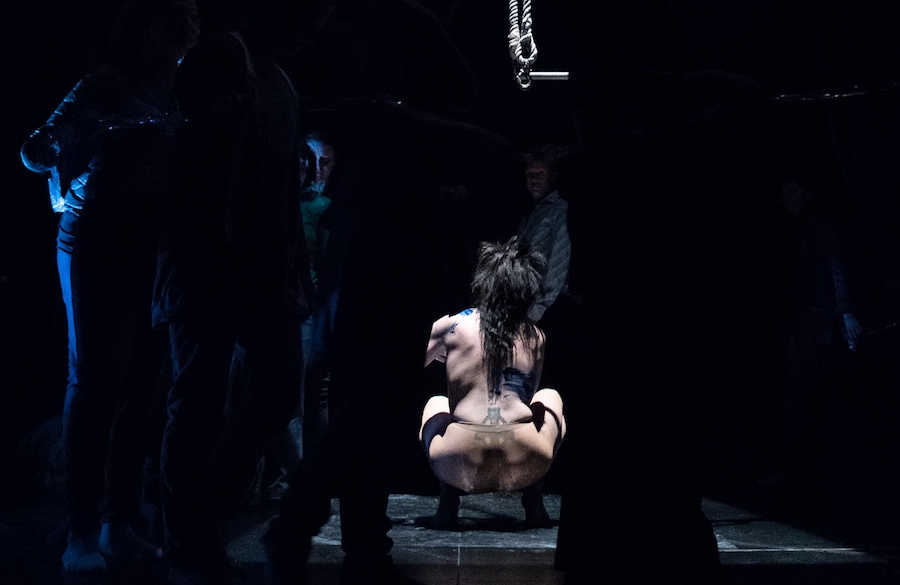 Transgressive. Excessive. Progressive.
Two parts make a whole to emerge as living sculptures of politicized feminine taboos.
Objectification. Dehumanization. Violence.
My sexualized femininity undressed, raw, and exposed.
Aging. To be alive and obsolete is a tough pill to swallow [1].
My paradox of in-betweenness.
I molt.
My body emerges as a site of opposition and as a source of political activity that pushes against these subjugations.
Evolution. Self-determination. Transformation.

MEATmarket and (trans)FIGURAtion materialized from dialogues of disobedience with mainstream circus practices and its larger socio-political hegemonies. These pieces serve as a provocation to disorientate and challenge conventional circus performance as well as resist the political forces that devise normalized notions of femininity.

[1] “It Hurts to be Alive and Obsolete: The Aging Woman” by Zoe Moss from Sisterhood is Powerful

Los Angeles native Dana Dugan is a circus artist, performer, pedagogue, scholar, dramaturg and mother based in Montréal. She was a founding member of, programmer and producer for the Chicago Contemporary Circus Festival, and founding member of CirqueOFF. She recently completed her Master’s Degree at Concordia University under fellowship, researching her circus body as a site for cultivating productive tensions and dialogues through the concept and practice of critical subjective disobedience. Currently, as a doctoral student at Concordia, Dana continues her performance and research on her circus body and its agency for challenging normative authoritarian paradigms. Her work reflects an agenda that advocates for socially conscious performances as well as alternative, queer, feminist, political narratives. Her performances seek to provoke questions not to politicize her body, but to utilize her body to incite commentary on the current political climate.

Hugo Dalphond questions synergy between body, space and light through the elaboration and building of scenographic devices conceived to initiate meetings. It is chiefly by making viewers and performers coexist and by modulating their perception of the space they share that he creates alternative sensorial experiences. This becomes a reason to engage in different co-presence qualities, and thus to gain consciousness of their interactions and rapport with others. Since 2015, he tackles these questions in a PhD that tackles light installation and the spatial opportunity it offers to rethink our collective states. He also collaborates as a lighting designer and director of scenography on various projects in theatre and dance (Projet Hybris, Daina Ashbee, Collectif La tresse, Andre Pena, Anne-Flore de Rochambeau, Claudia Chan Tak).

AndréAnn Cossette was born on a city-island called Montréal, but known as Tiotia:ke for the Kanien’kehá:ka and the Anishnaabe. In 2018, she completed, with great distinction, a BFA in Intermedia at Concordia University. Her work explores the ways in which trauma holds power in our lives. She focuses on the consequences of trauma in our bodies and our psyches, and on the different ways we survive them. Performance art is her preferred medium, in which she often integrates elements of sound and voice, as well as sculptural objects, electronics, and video. Writing and research play a major role in her process.

Danica Olders is a Montréal-based visual artist. From studying textiles and fashion at NSCAD University (2011) and growing up as a painter/drawer, her practice crosses multiple disciplines, utilizing fibre techniques, painting, performance, and animation. Olders has worked with numerous musical and visual artists, creating costumes, album artwork, music videos, promotional material, and clothing design. She has also produced her own clothing label, The Lost City, and has been instrumental in the conception and art direction of various establishments in Montréal, such as Le Mal Nécessaire and Bar Kabinet, designing and producing murals, signage, and silk screened wallpaper.