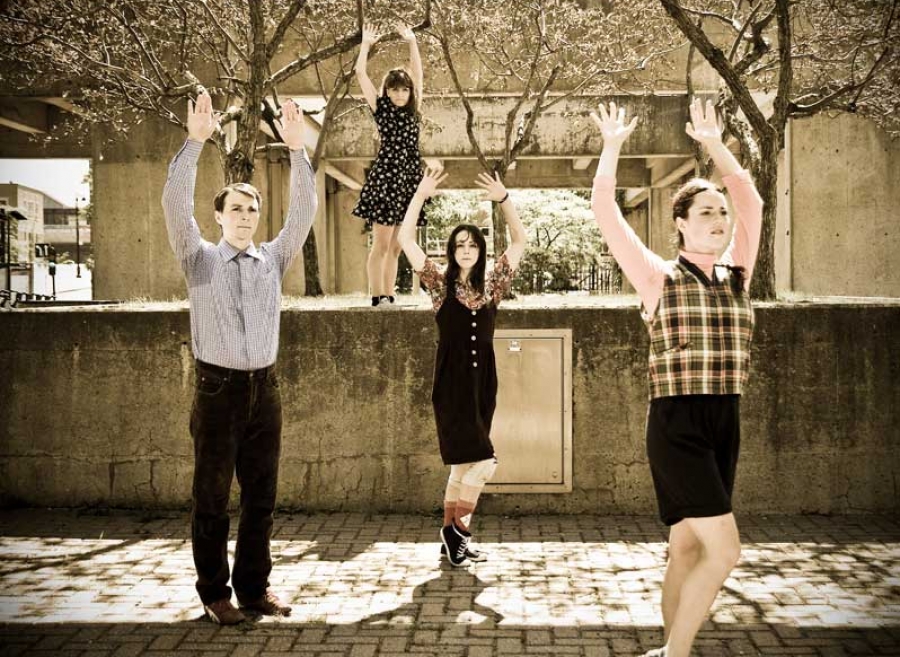 To prepare for no reason. To be consumed by something that is non-existent. Displaying useless effort only to overuse repetition. This might be a touching duo or a hilarious solo, or maybe not. Family ties, a strange world and above all a show that doesn’t take itself seriously. 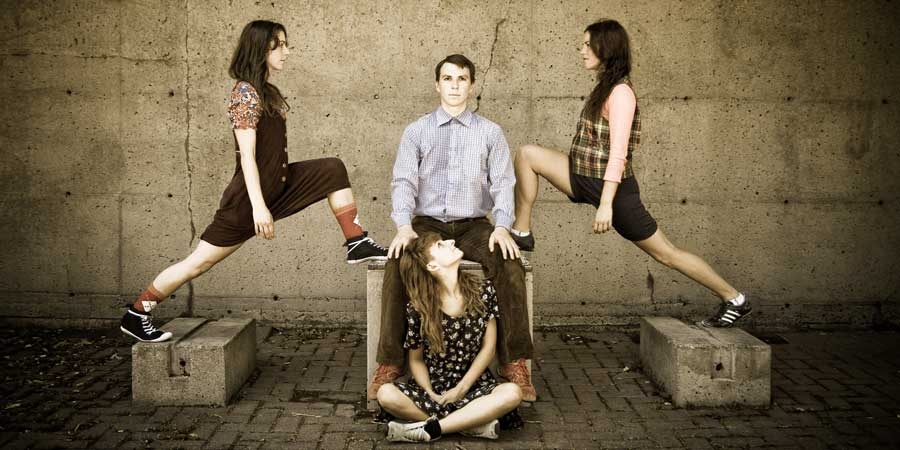 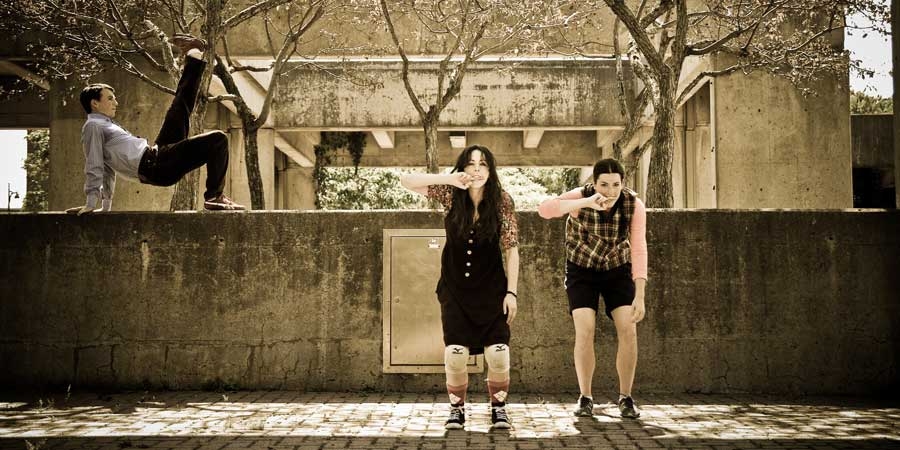 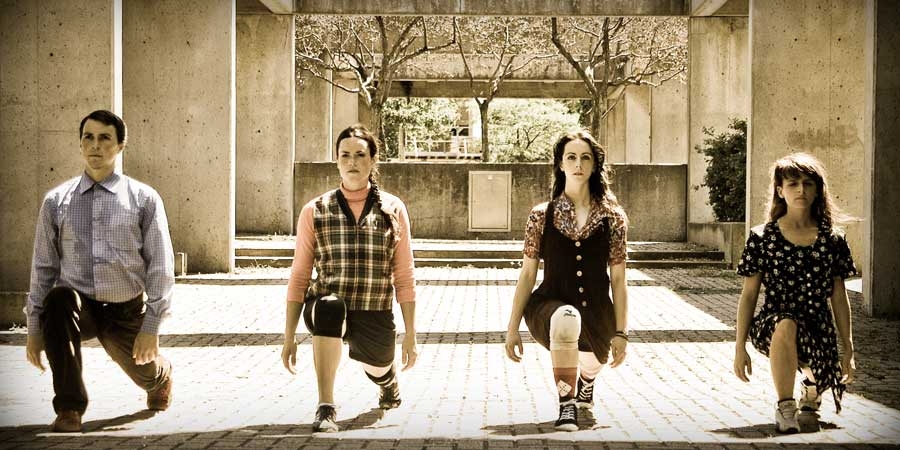 Isabelle Boulanger has a desire to create a form of dance never seen before. Work that reflects her taste for humour and the pleasure of entertaining the audience as well as herself. Work that can speak to novice audience members as much as to experienced fans. Interested in pairing dance and humour, she uses both self-mockery and the absurd. Comedy is the driving force in her process, particularly the idea of useless efforts and exaggerated repetition.

Letting herself become inspired by the individuality of each of her dancers, Isabelle’s style is a result of exploring unusual movement or, on the contrary, out of context everyday movement. This exploration usually leads to the creation of characters with original physicality that remains close to the personality of each of the performers, who then perfect their characters with whatever inspires them in the moment. The iteration of the dance movements and these characters offer an eclectic and funny world that will raise questions to which one is not sure about the answers…

A native of Montreal, Isabelle Boulanger graduated from LADMMI, L’école de danse contemporaine in May 2011. Appreciating technical and formal choreographic styles like that of Sylvain Émard, she also likes movement that deals with energy and intention, which she found in the work of Frédérick Gravel and Dana Gingras. In addition to her training as a performer, Isabelle is evolving as a choreographer. Her second piece, Fente-toi!, was presented at la Maison de la Culture Maisonneuve during the summer 2011 edition of Zone Homa. Created during the winter of 2010-2011, her first piece Une grande fente pour dire «allô» will be presented for the first time in Monument-National’s Studio Hydro-Québec in September 2011, for this year’s edition of New Waves – First Surging, produced by Tangente. Through her creative process, she has called upon the guidance of two rising choreographers of the Montreal contemporary scene: Frédérick Gravel and Jacques Poulin-Denis. Wanting dance to be accessible to all, Isabelle approaches it with humour, lightness and derision.

House of Cards is a piece based on the hierarchy of playing cards. The work focuses on the relationship between five characters and the subtleties of their personalities and combined stories. Between interpersonal tensions and role-playing, this piece seeks to pull the audience into a world of pressure and precision. 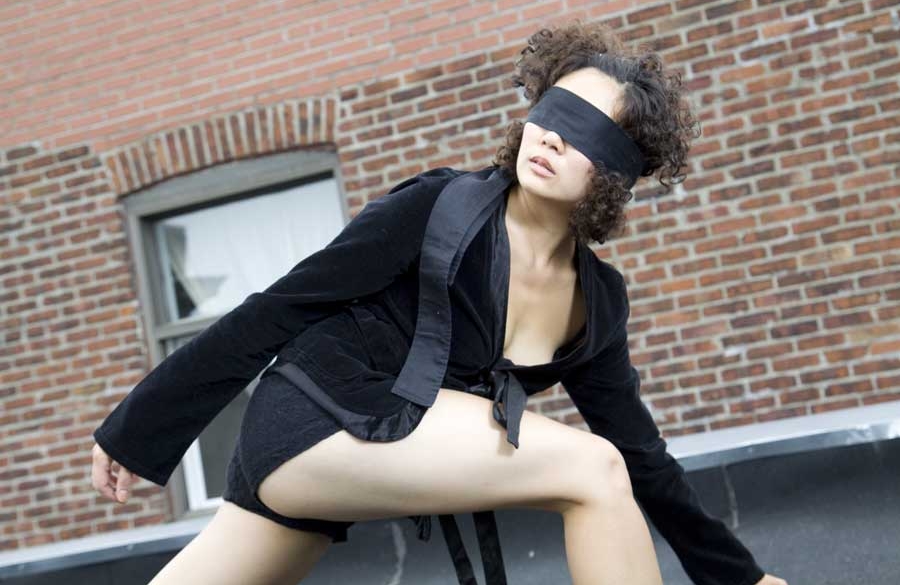 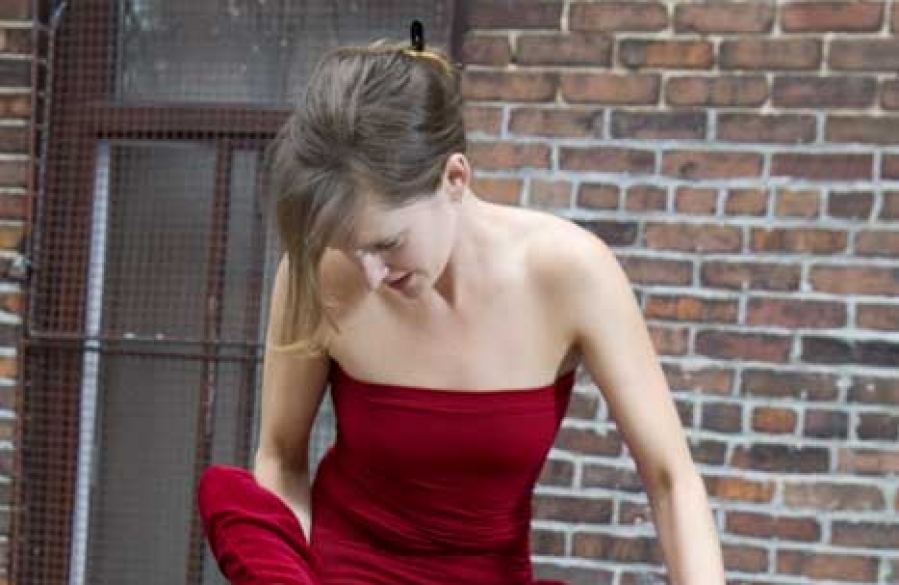 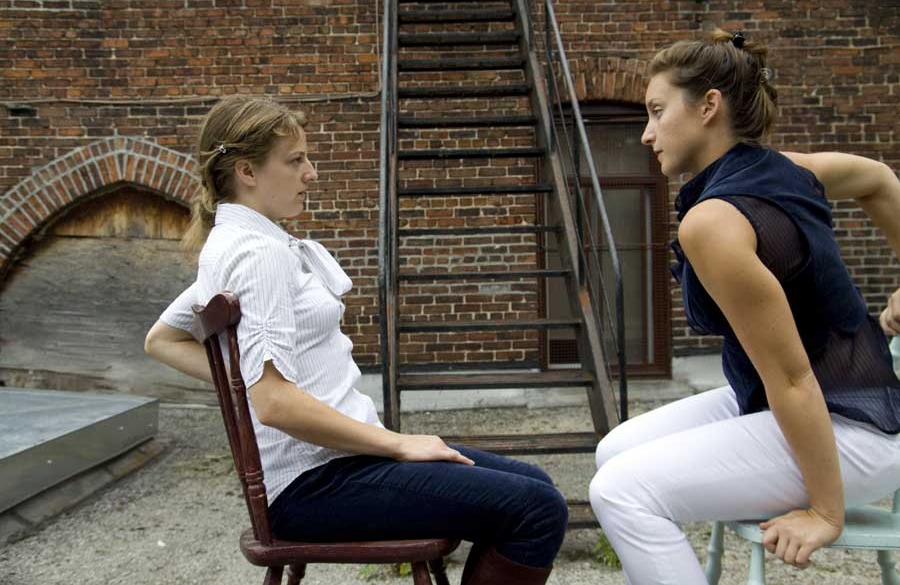 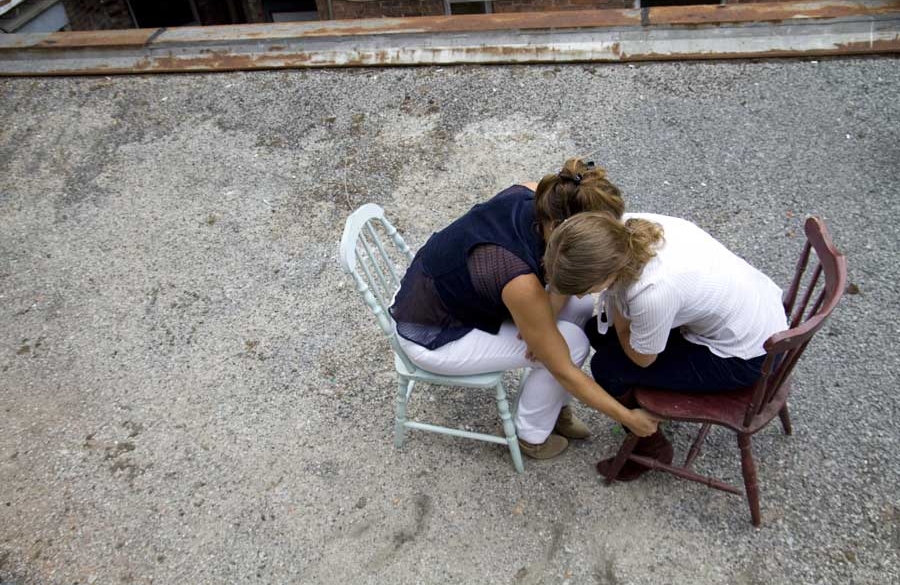 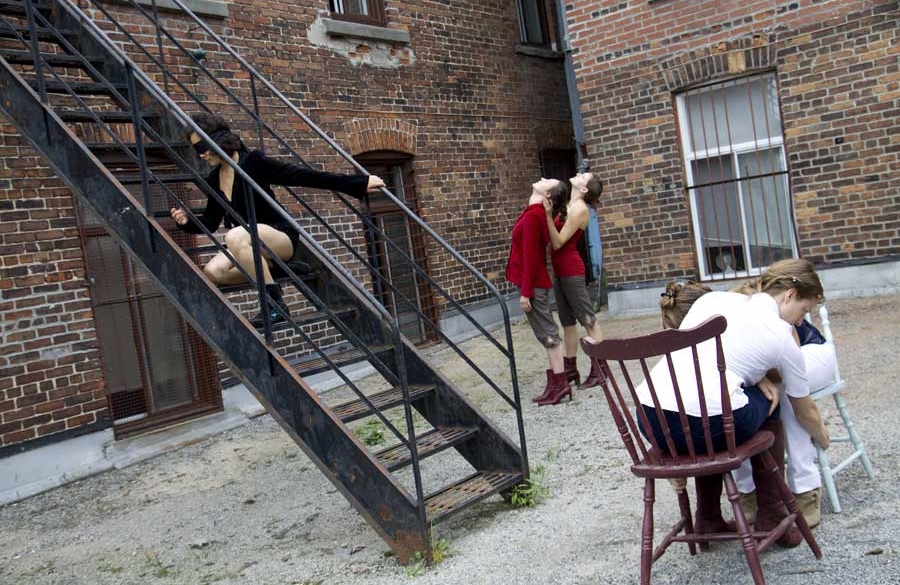 Stéphanie Fromentin is a Franco-American choreographer and performer. She is a contemporary dance graduate of Concordia University and continues her training in choreography at UQAM, where she wishes to complete a master’s degree in 2012. She has worked with many Canadian, French and American choreographers, and continues to refine her work as a performer and choreographer with precision and sensitivity. After completing her bachelor’s degree, Stéphanie Fromentin has pursued her life as a dancer and choreographer in France. Her work has been presented in the United-States, Montreal, Paris and Grenoble as well as dancing in shows throughout France, Germany and Canada.

Rémi Laurin-Ouellette first began his studies in theatre. When he was only eleven years old, he joined the creation of Les Troyennes, directed by Alice Ronfard and presented at the Théâtre du Nouveau Monde. He then became a member of the company Carbone 14 for two years while also taking part in projects with the Conservatoire d’art dramatique as well as in television. Passionate about movement, he undergoes training at LADMMI, L’école de danse contemporaine with teachers Marc Boivin, Anne Lebeau and Andrew Harwood, among others. From 2007 to 2011, Rémi was a member of the company O Vertigo.

Biography of co-choreographer:
Stimulated by the pleasure of pushing back physical boundaries, Evelyne Laforest practiced rhythmic gymnastics for ten years and was a member of Team Canada. After having explored dance, theatre and circus arts on a recreational level, she began training at the National Circus School of Montreal, where she created a balancing act that represented the school at the Festival de Tournai, in Belgium. After graduating in 2007, she had the opportunity to work with Daniele Finzi Pasca, Maria Bonzanigo as well as joining the teams of Teatro Sunil and Cirque Éloize, participating in the creation of the show Nebbia, with which she travelled internationally until 2010. She is currently studying dance at LADMMI, while continuing to participate in different projects, notably with Cirque Éloize.

This solo offers one sequence that is repeated three times with different intentions linked to seduction: sensuality, flirting and provocation. The boundaries between the three propositions are thin, pervious, subjective… even impossible to define. Basically, what is it that seduces?

The evolving structure of the piece aims to raise questions concerning hyper-sexualisation in society. No matter which cultural circle they might think they belong to, La séduction? encourages every individual to become aware of their own reactions to what they are seeing before them. The idea is not to moralize and the proposition presents no certainties. The goal is to provoke honest thinking regarding the spectators’ reactions, unmasking their values and habits. 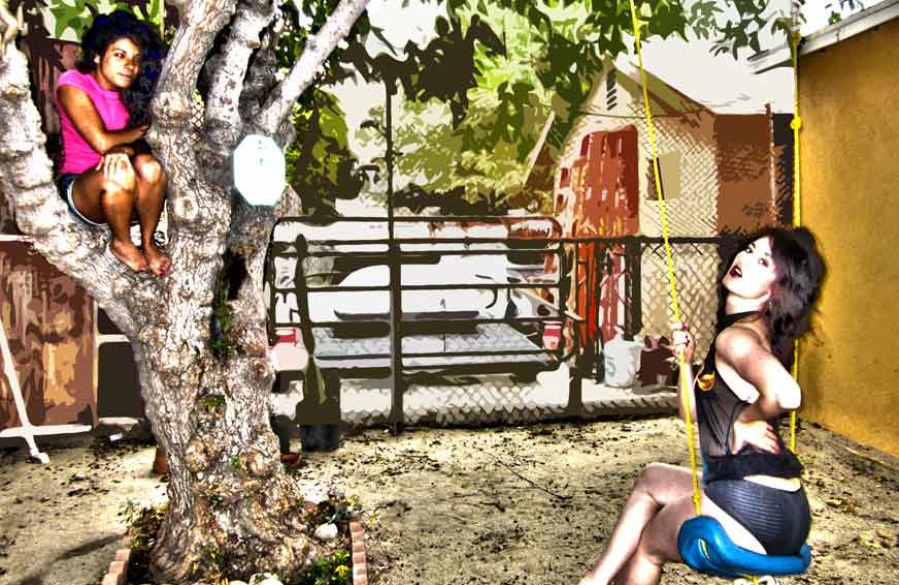 Because authenticity reveals itself through action I believe actions are worth more than words. That it is through actions that the true nature of a being is best revealed. It is in the choices people make following their actions (or lack of them) that I get an idea of whom the person is.

My vision of contemporary dance stems from this way of interpreting human nature and the attention to sincerity in gesture, which I have explored in my work as a dancer. I believe that work based on one’s own sensitivity and physical capability is the only way to transmit anything of interest. More than anything, it is the way a performer takes responsibility for his actions on stage that interests me. It seems to me that the handling of the unexpected is the most interesting of virtuosities: the instinctive action and reaction of the performer in the moment, even when the piece is extremely precise. Since the human body is imperfect and not always consistent, there are always readjustments that will change things from one rehearsal to the next. Moreover, since the human being seems to me to be rather clumsy, as is often seen in his actions, I consider dance to be a way to reveal to most honest and honourable aspects of an individual that is ready to commit. Hence my interest in dancing and looking at dance.

My work in creation emerges from a great desire to share my thoughts and questions and to generate discussion. In addition, I consider the chance to communicate through representation as a privilege. When an audience is ready to give of its time and attention to a show, I think that the artist has the responsibility to spark sensitive reflection and create a space where artist and spectator can ponder the imperfect but fascinating human nature.

A dance graduate of UQAM in 2008, Jade Marquis is a winner of the William Douglas prize. She has performed for choreographers Émilie Poirier (Les Restants, Tangente 2008), Lucie Grégoire (Le retour du temps, 2008) and Normand Marcy (FLUIDENGINS, 2009). After a three month training program at the Dance New Amsterdam in New York, she returned to UQAM to complete a master’s degree. In 2010, she joined the team of L’Abécédaire du corps dansant, initiated by Andrée Martin. La séduction? is her first choreographic piece, inspired by her academic research.

An ageless woman, carrying many lives inside her, wanders in a limited space, between shadow and light, beauty and ugliness, life and death. Tirelessly seeking the light, like a growing plant that is subject to sometimes harsh weather conditions. Life fluidly moves inside her, her fragile skin softly flowing. Life may also crystallize and let this delicate flower sink into oblivion.

This project is mostly based on the « Continuum Movement » technique, seeking fluidity in the movement of the body. How breathing may activate the fluids, how to cease breathing may paralyze movement. The many ways to use a dancing body in a given space. How these principals may nourish our imagination and give birth to this woman, her silk petal skin, her bamboo stick bones. 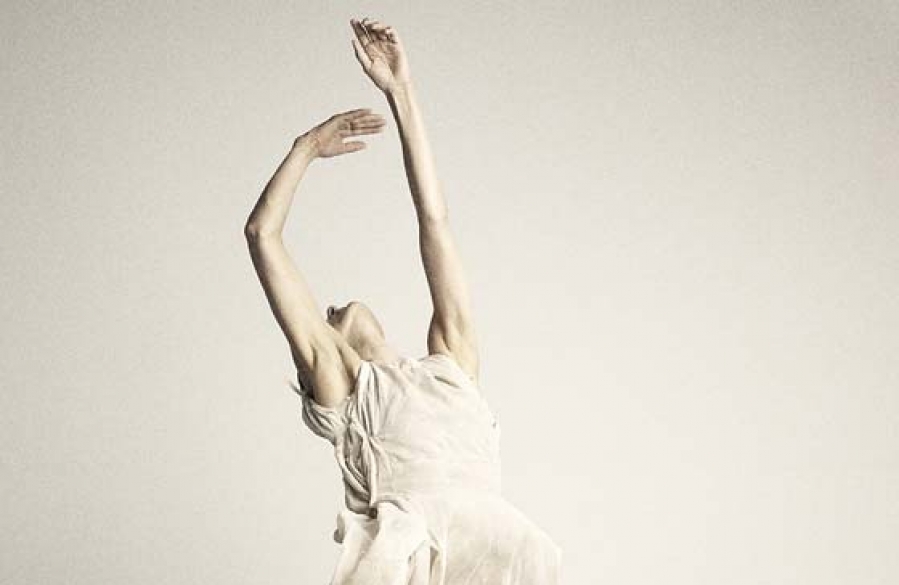 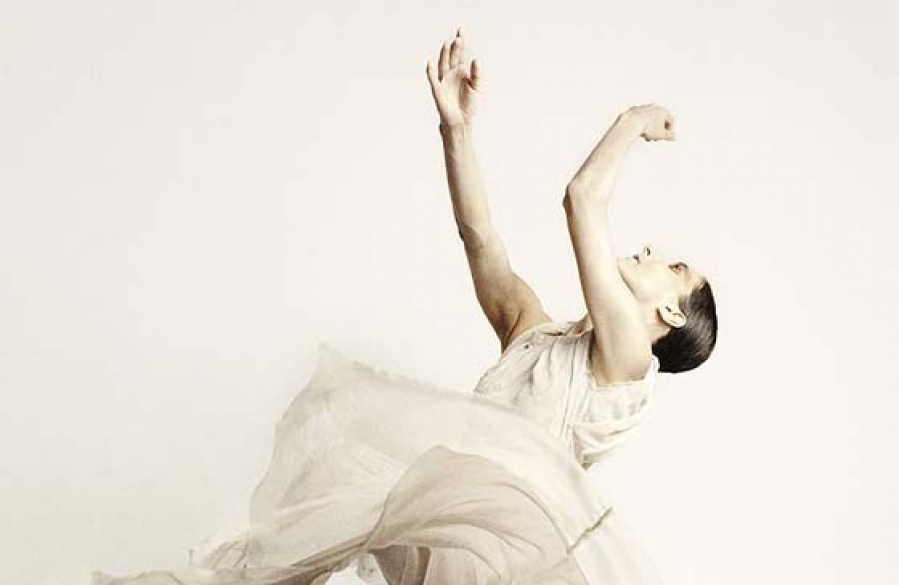 The expression of the soul, of the many layers of the human psyche and the hidden memories inside all beings, memories that have travelled through the ages since the beginning of time, these are at the root of Hélène’s artistic approach. To create worlds where the imagination glides along the furthest regions of the soul is what interests her passionately. Butoh, a sensitive dance technique from Japan based on mental imagery and transformation, has become the essence of her work, creating strange surreal beings. Somatic research is also an infinite quest that allows her to investigate human anatomy in all its complexity, with an interest in the different textures of the body. Finding cohesion between these two disciplines allows the performer to dive deeply in a state of being rather than doing, stimulating the audience member to travel in his own imagination.

After many years exploring movement, Hélène Messier discovers butoh, which will profoundly alter her approach to movement and stage presence. In addition to teachers Katsura Kan, Denise Fujiwara, Yumiko Yoshioka, Martine Viale and Jocelyne Montpetit, it is especially with Mario Veillette that she has pursued her training. For him, she has danced in Québec in the pieces Lanterne, Berceuse et Nébuleuse, Toki, Fantôme et Œufs Debout, 3+3=33 and Père et Mère. She also performed for Katia-Marie Germain in «Y Demeurer » during New Waves, Class of 2010.

A recent graduate of Concordia University in contemporary dance, her work has been presented at the Art Matters festivals, Common Space and Nuit Blanche à Montréal (Kinuito and N’être).