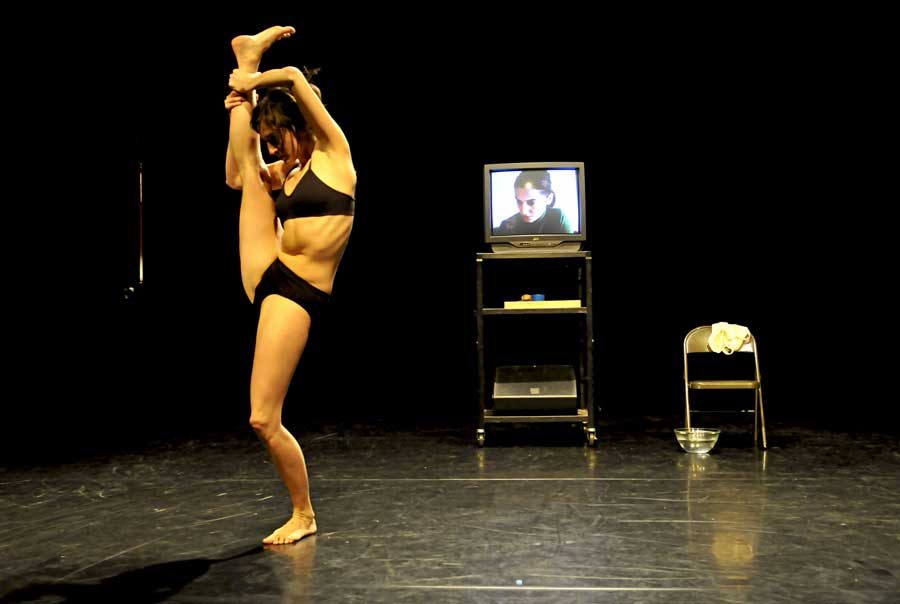 Corps.Relations is a duet between body and head. This work explores the gap between the logical representation of reality and the immediate embodiment of impulses, creating an absurd illusion for unity. An image on a TV screen, close up of a dancer’s head (shoulders and hands), executes quotidian gestures and gives an impression to observe and analyze the show in real time. At the same time, the performer (live) on stage is absorbed in her dance trying to transform inpure movement her physical sensations and her perceptions of the surrounding environment, trying to measure the distance that separates her from her own image. 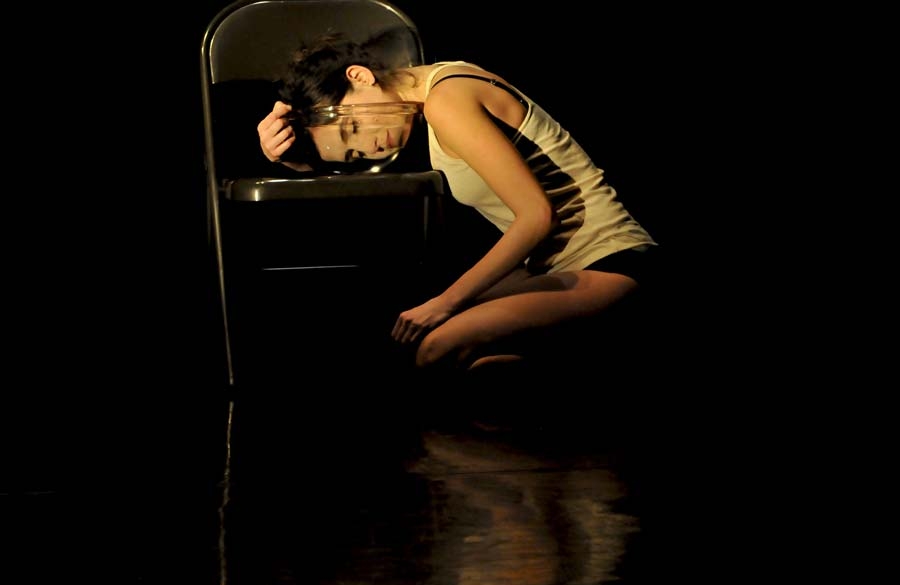 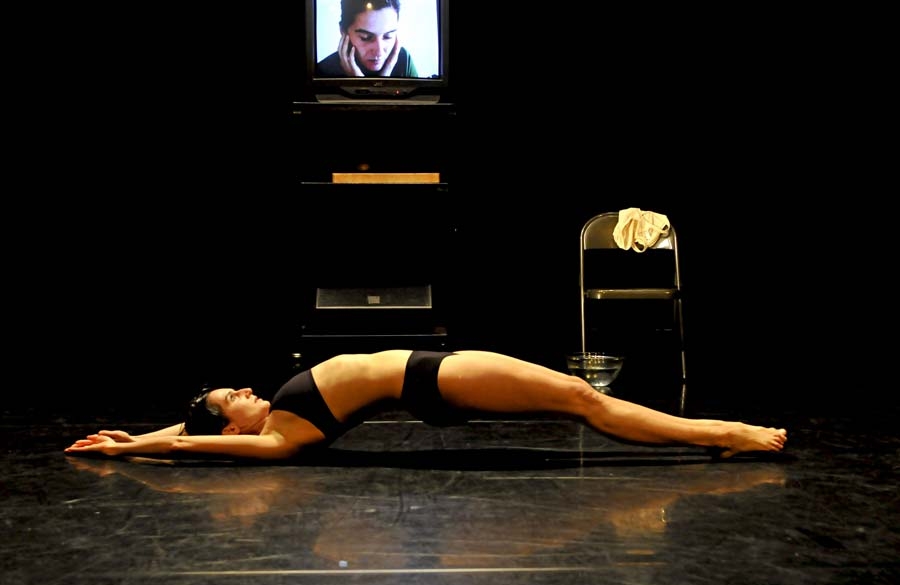 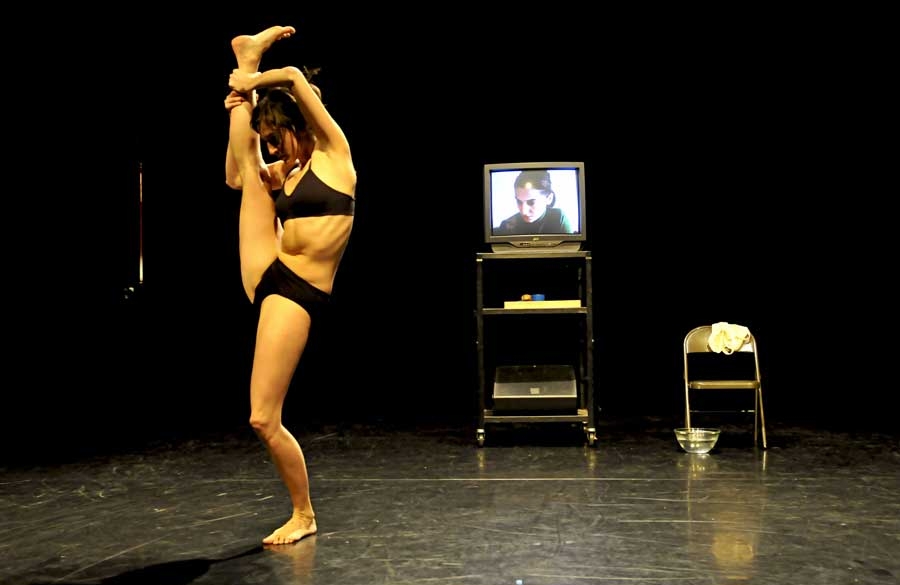 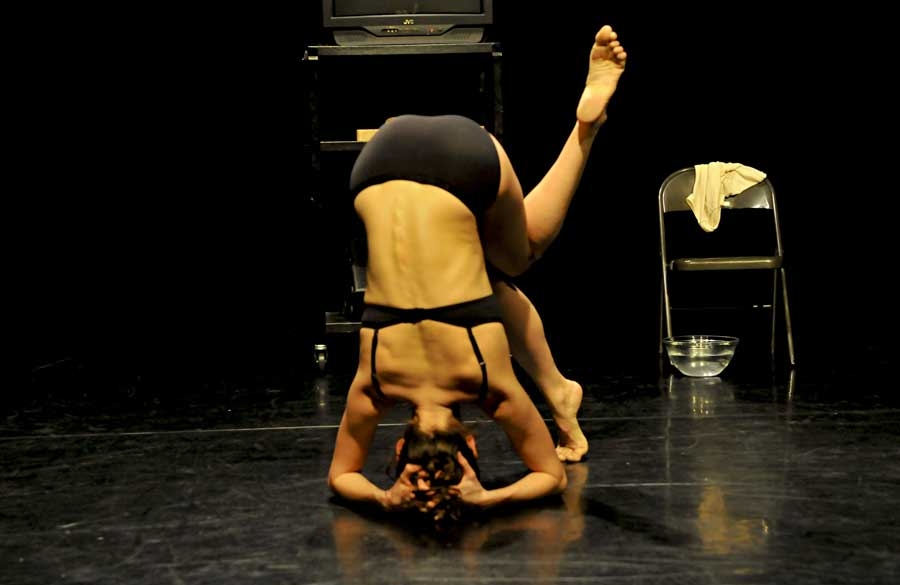 Parallel to her work as a performer, Maria Kefirova has been developing her own artistic vision combining dance, theatre, performance and video. The main concern in her recent projects (Gold Meat 2010, Corps.Relations 2010, Manufacturing tears 2009, my Head/my Body 2008, Appearances 2006) is the constantly undetermined equilibrium which exists in our relationship with our bodies; the correlation between our body/mind reality and our socio‐cultural environment. She explores the body as a complex and rich paradox, as a place of constant motion, transformation and transition and searches to reveal its poetic power.

Maria Kefirova is a Bulgarian-born dancer and choreographer based since 1992 in Montreal. She has danced for different companies and choreographers such as Lucie Gregoire Dance, Cas Public, Florance Figols, Heloise Remy, Sara Hanley and Mariko Tanabe. Currently, Maria is part of DasArts (Master of Theatre), The Netherlands.

Who better than the artist can understand the exile ? Babacar Cissé knows the journey, the train platform… These trains materialize for him memories and future destinations of his life. When to return from this trip ? Why stay or leave ? Have these questions not crossed your mind at least once in your life ?

Some know the pain of leaving a homeland, and the others hoping to find a better future elsewhere. Their stories touch us and awaken in us the emotion of an experience that seems strangely close to us. Wouldn’t it be because we are all inherently exiles? Men are constantly uprooted from one place to another, even from our childhood or a part of us that life and experiences have led us to cover, forget, or quit. 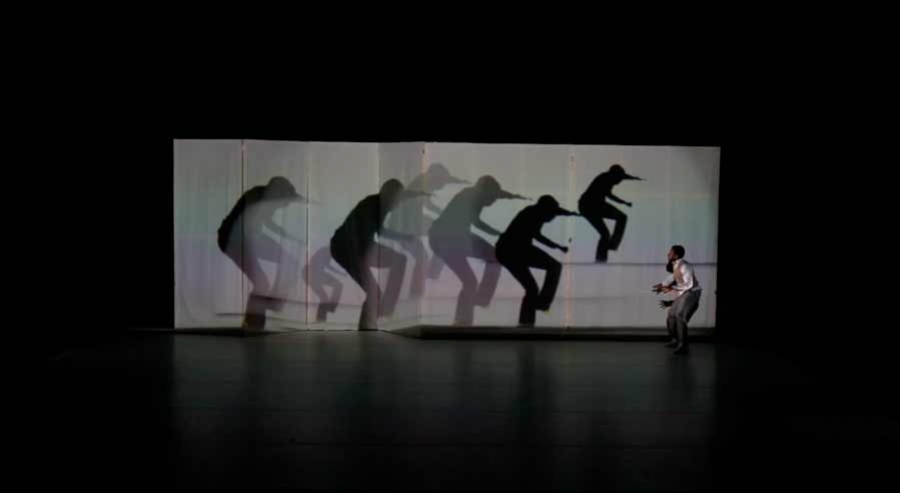 Dance, and more broadly art, remains the motto of Les Associés Crew that loves to mix their work discipline and spontaneity with dynamism and maturity of their proposals, development of individuals and the group requirements. The company has gradually gained experience and was structured around the desire to create, but without ever losing its warmth.

LES ASSOCIÉS CREW has been present in the French art scene since 2006. Its members are hip hop dancers in the region of Bordeaux with exceptional records for many years, both in battle shows and in various dance companies (Hors série, Pietragalla, Rêvolution, Choréam, Paul Les Oiseaux, Ultimatum Step, Tribal Jam).

Under the artistic direction of choreographer Babacar Cisse “Bouba”, seven dancers and performers, encompassing jazz culture, classical, contemporary and African, form the core of the team.

Winner with Être et renaître of the 2008 Beaumarchais contest, (competition rewarding a young dance company for his writing in dance choregraphy), the company has received the support of the Foundation Beaumarchais / SACD and Central Dance Le Galion. The CCN of La Rochelle will provide founds on creating the next performance of the company, a solo : Le syndrome de l’exilé (The exile syndrome).

A white time.
A white space.
A white smell and a white noise.
White as an interruption, a suspension. The intention that lies just behind the eyes closed.

Space/Time, latency that runs beneath. Clear space becomes Nest where the body vibrates, where the body forgets to be a body. In this place we can imagine the feelings that stop to rest, to better prepare for the future that we dream.
Bianconido is a place of latency between thought and action, between intention and direction. It is the space where the feeling comes true, the untouchable becomes touchable, and the body becomes present, here and now, full of future.

With the bodies through the time of suspension, to grab the tracks of sensations that arise in building a nest. We can’t go back and we can’t grab what is coming after. In the White we can shine. 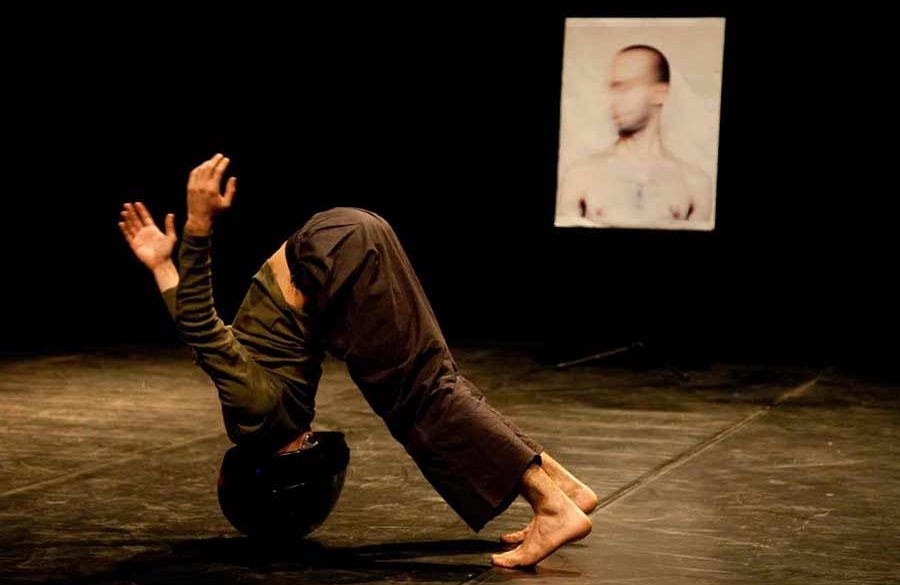 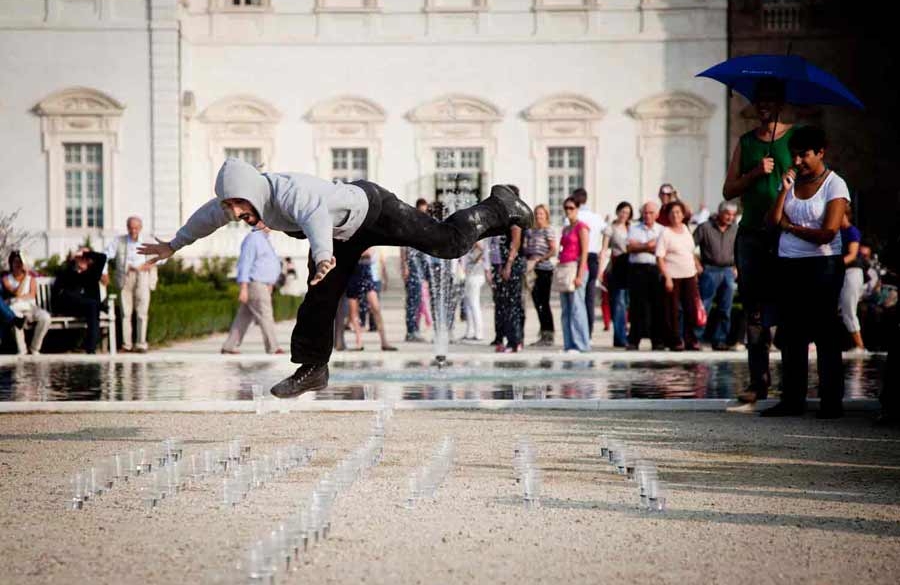 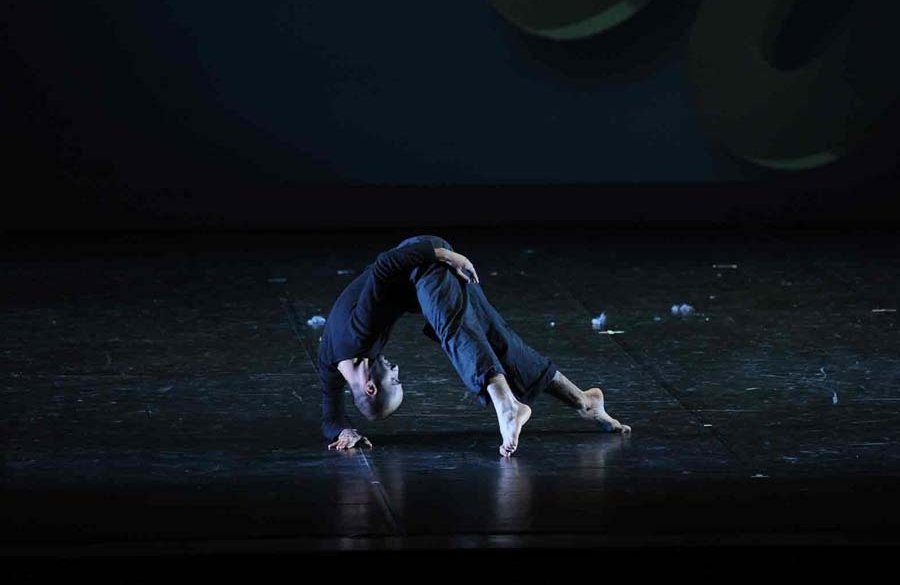 Daniele Ninarello attended the Rotterdam Dance Academy and has since had the opportunity to dance with international choreographers:Bruno Listopad, Felix Ruckert, Barbara Altissimo, Meekers Uitgesprokendans and Virgilio Sien. Since 2007, he has been continuing his own choreographic research and presented his creations Coded’uomo, Man Size, Non(leg)azioni and God Bless You in several festivals around Italy and Europe and in Brazil. As a choreographer he collaborated with Collectivo Burak “Spazi per la Danza Contemporanea 2010”. Man Size was selected by Anticorpi XL network and was presented within Festival Les Reperages. He took part in the Transforme project, under the artistic direction of Myriam Gourfink at the Fondation Rouyamont, where he experimented the gestural capture using the new technology, along with composer Daniel Zea. He also received a choreographic residency for a co-creation with Gianfranco Celestino at Mosaico Danza and at the Centre Choreographique Luxemburgeoise. He was finalist at “Premio Equilibrio Roma 2011” with Occhi neri capelli blu, and he was selected with Man Size and Non(leg)azioni for CDC-Les Hivernales Avignon 2011, 100% Danse Quand les régions s’en mêlent… and for Correios em Movimento Festival of Rio De Janeiro.

Unattaching is a short dance work that chronicles the breakdown of a relationship, exploring personal experiences of the sense of longing for something unknown and of the conflicting feelings of desperation and freedom found in the dissolution of a union.

At the heart of the work is the body and the space around it. The two dancers explore the dynamics of a disparate relationship through complex interactions with each other’s personal space, both on stage and on screen, with abstract and emotionally charged physicality and a resonant live electronic soundtrack. 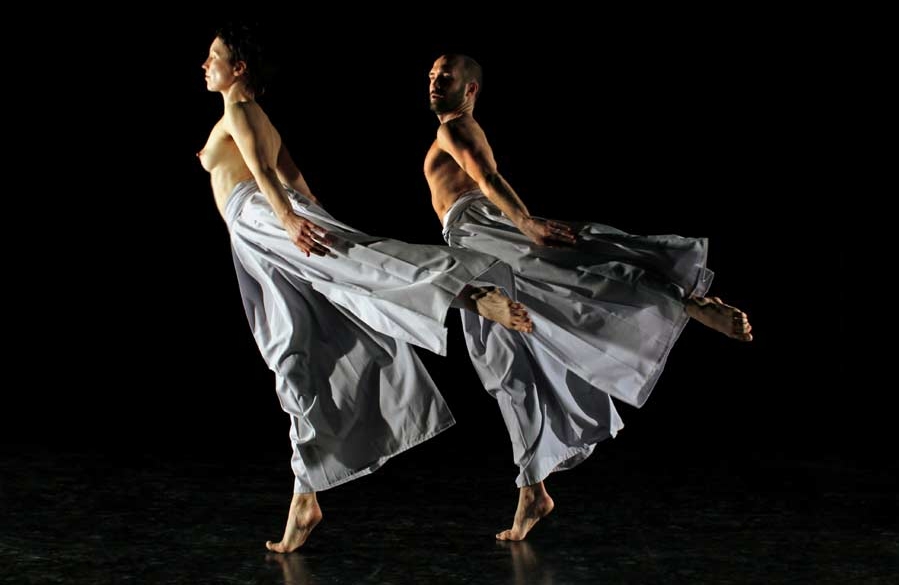 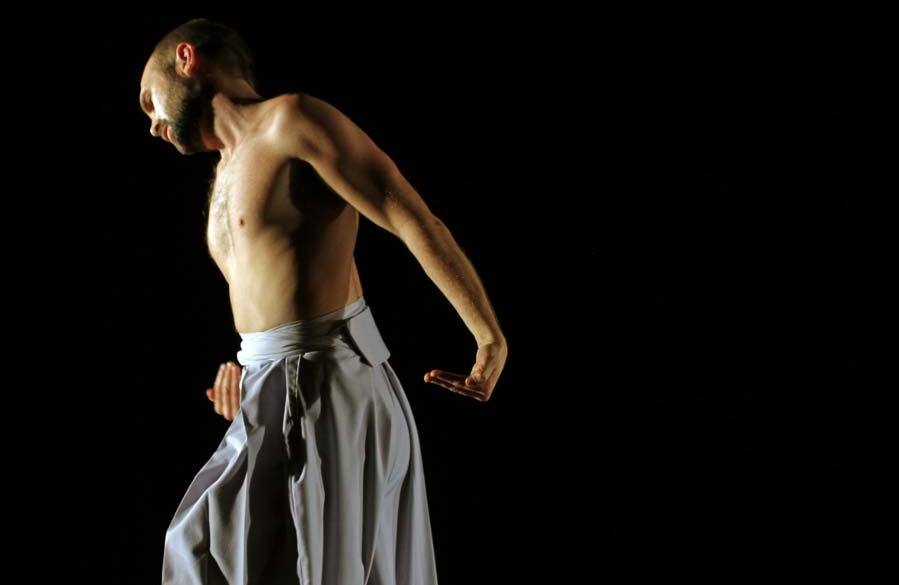 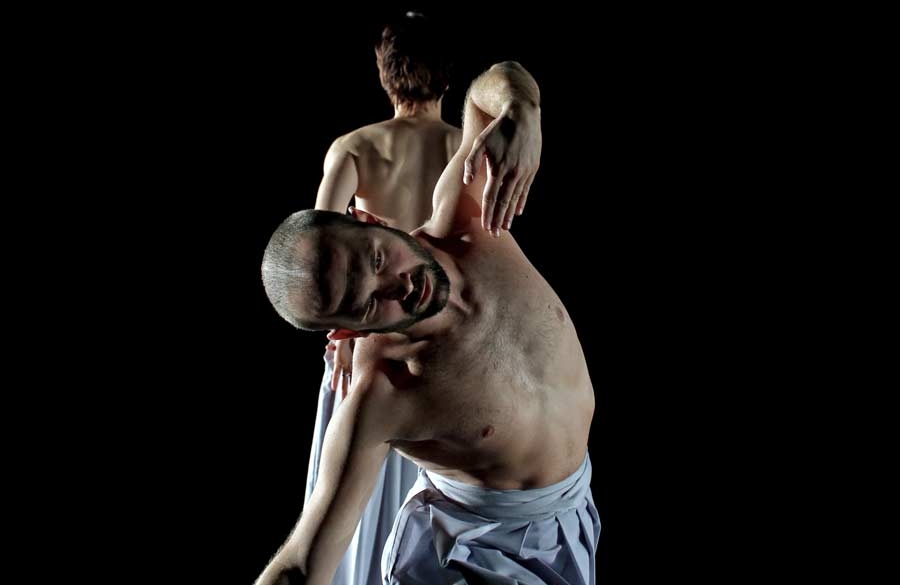 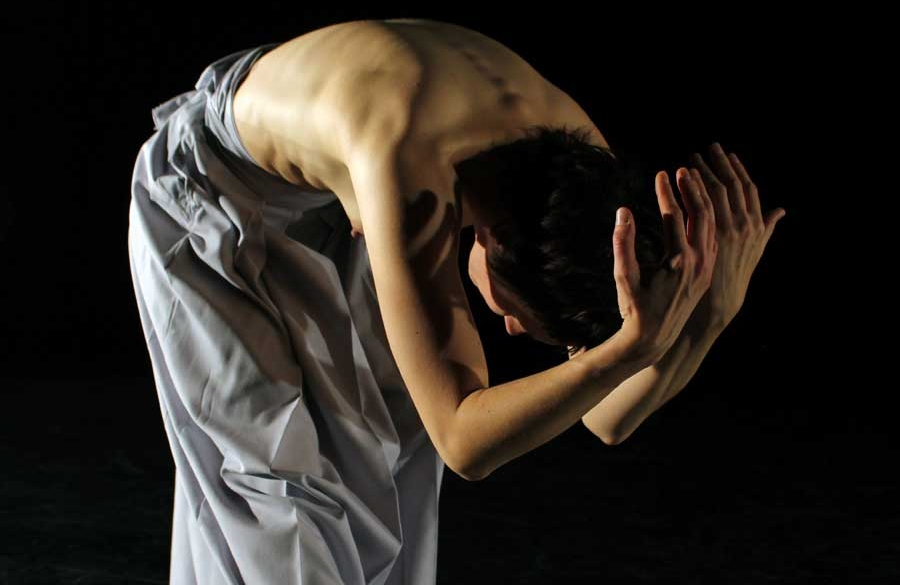 Unattaching is a new piece for 2 dancers, musician and video screen, re-worked from Kuuluako, which was originally commissioned by Welsh Independent Dance in 2006 and has been performed both as a duet and a solo.

The choreography, film and sound for the original piece: Kuuluako were developed simultaneously from the same initial concept to allow natural integration of these aspects and to enable each element to influence the others. The film and the soundtrack became integral to the choreography – adding dynamic and emotional layers to the performance.

Since the creation of Kuuluako the working practice of the collaborators has evolved significantly, becoming more process-led, layered and interactive. Their recent work focuses on methods of choreographing all of the elements that make up a dancer – including body, mind, spirit and energy – as well as the audience. In Unattaching, the artists are revisiting one of their earliest collaborations but this time with a mature, more holistic perspective.

tanja råman+dbini industries was created in 2005 by choreographer Tanja Råman and visual/sound artist John Collingswood to produce poignant work that, although abstract in nature, draws inspiration from personal histories, making the work accessible and emotionally significant to an audience. Over the years, the company has developed a distinct style of work that integrates abstract yet expressive movement with the innovative use of technology. The company aims to explore and enhance choreographic expression with the use of creative staging, using video, light, sound, photography, drawing and other artforms.

tanja råman+dbini industries is an associate company of Taliesin Arts Centre and of the National Dance Company Wales.

Tanja Råman originally from Finland, studied dance at the Northern School of Contemporary Dance in 1997-2000 and gained her MSc in Dance Science at Laban in 2003. Tanja completed her PgC Teaching in Higher Education at the University of Wales Institute Cardiff in 2008. In 2011, Tanja also became a registered cranio-sacral therapist.

Since 2000, Tanja has worked as a dancer with various choreographers, performing in contemporary dance / dance theatre / contemporary butoh productions in the UK and internationally. Tanja has been living in South Wales since 2004 and currently works as a freelance choreographer / dancer / researcher and lecturer. Tanja also practices as a cranio-sacral therapist.

As a choreographer, Tanja Råman has developed a distinct movement aesthetic that has lead to her work being shown in established British venues and dance events, including The Royal Opera House, Southbank Centre, The Place Prize 2006 and British Dance Editions in 2008 and 2010. In 2007, and again in 2011, Tanja received Creative Wales awards from the Arts Council of Wales to embark on major research projects and to develop her choreographic practice.

John Collingswood (dbini industries) is a multidisciplinary artist who works through sound, video and visual design. In 1992, he graduated from University of Wales, Newport with a degree in Fine Art, and began applying his skills in various performance contexts, from nightclub visuals and djing, through children’s theatre to contemporary dance. Since returning to Wales in 2006, he has collaborated with numerous artists and organisations including National Theatre Wales, Marc Rees, Sean Tuan John, Cai Tomos, Re-Live, gaijin-san company, Deborah Light, Earthfall and Welsh Independent Dance. John is one of a handful of artists in the UK currently using the software package Isadora to explore the possibilities of creating responsive video environments within a contemporary dance context.

Drawing inspiration from the science of mirror neurons, which blur the boundaries between observation and action, Arno Schuitemaker’s The Fifteen Project creates an inventive and a strong physical experience that explores a complex network of relationships, freed from linear development in time or narrative.

For Dance Roads. Arno Schuitemaker re-worked his evening-length piece into a fifteen-minute duet for two male dancers. The dancers embrace playfulness, seek interfaces, and through this they propose the question: How do I relate to what I see? 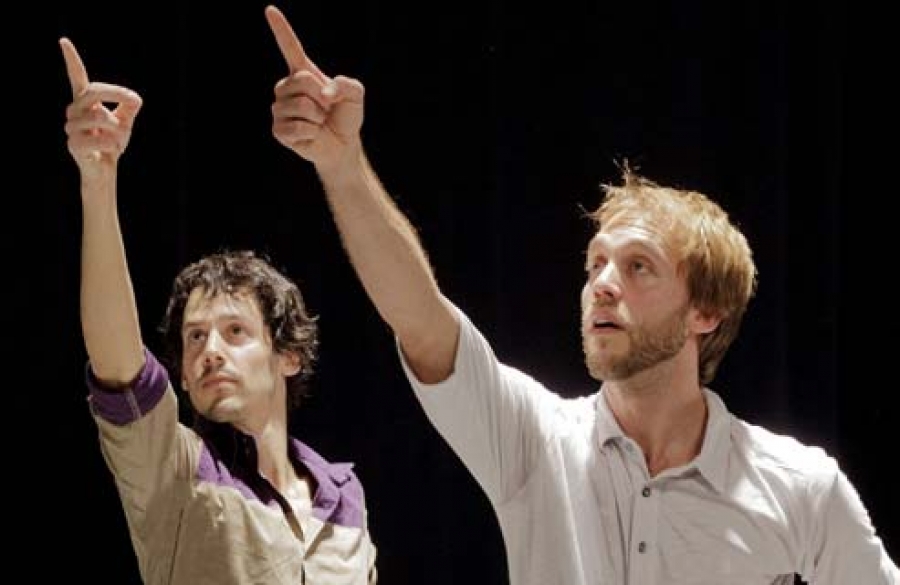 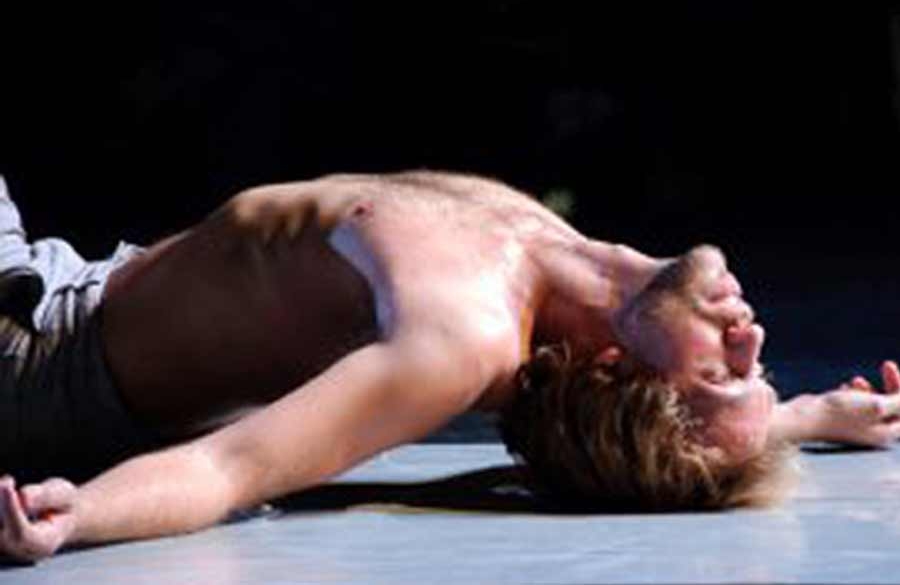 The present seems to be screaming for a response. The everyday complexity around us makes the world become more and more intangible. Shifts on economical, social and political levels are overlapping and continuously follow. A natural cohesion seems to disappear. With The Fifteen Project, Arno Schuitemaker sets a new step in his research about the relationship between the human being and the time we live in with two central questions:  how we relate to ourselves, to our body and to others on one side, and how the science of mirror neurons influences the relationship between the performers and the audience on the other side. Two male dancers, both with their own strong personality, dance a fifteen-minute duet. Choreographer : Arno Schuitmaker Performers : Manel Salas, Iker Arrue Music: Wim Selles Light: Ellen Knops Costumes: Judith Abels Production: Productiehuis Generale Oost and Productiehuis Brabant

Arno Schuitemaker obtained his Master’s degree at the University of Technology Delft, Arno Schuitemaker (1976, The Netherlands) and then decided to drastically change course to study contemporary dance. Since his graduation in 2007, he has created many successful performances like Proxemics (2007), ZONE (2008), ANOMIA (2008), EXIT (2009), Couple (2010) and TIDE (2011). Other works were created for Codarts Rotterdam Dance Academy, Artez Dance Academy, Legitimate Bodies Dance Company in Ireland, and Dutch company Conny Janssen Danst. He is a teacher at the BA Dance and Choreography departments of Fontys School of Performing Arts and he regularly teaches (repertory) workshops and classes for professional dancers and dance students. In 2009, he won the Dioraphte Encouragement Award and in 2010 the Brabant supports Top Talent grant.